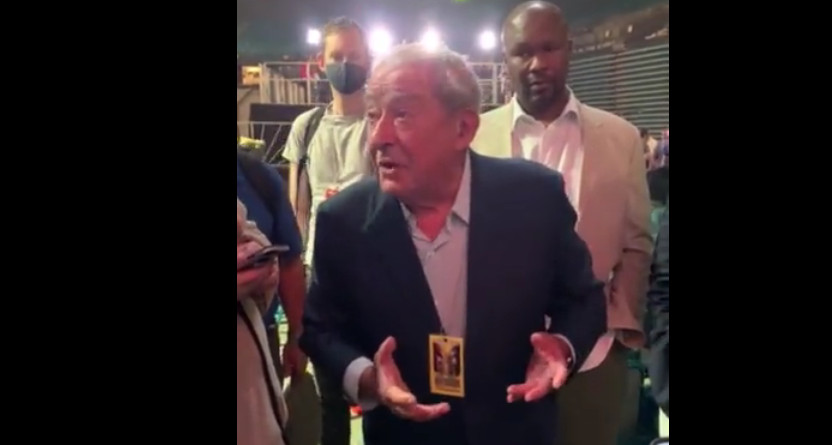 The world of boxing comes with a lot of back-and-forths and conditions, and that’s perhaps particularly true when it comes to unusual joint events like the ESPN/Fox broadcast (both pay-per-view) of Deontay Wilder-Tyson Fury III (Saturday, October 9, at 9 p.m. ET). And that’s context that should be kept in mind when considering a rant like this from Bob Arum, the founder and CEO of Top Rank (which has a deal with Fury), against Kate Abdo (who was hosting pre-fight events for Wilder-Fury III as part of her deal with Fox Sports):

Bob Arum incredibly critical of @kate_abdo. Says she was biased towards Deontay Wilder and knew they weren’t having a face off.

“They bring this woman in from the UK, and she’s slanting all the press coverage to Wilder! I don’t give a damn, but it’s obvious that that’s what she was doing. And then, she knew that the understanding was ‘No faceoff,’ I argued with Fox ‘No faceoff.’ We said ‘No faceoff.’ And what does she say? ‘Now we’re going to do a faceoff.’ Fuck her and fuck them! There was no faceoff, and we saved the fight.”

As noted above, there’s a lot of context to this. Wilder-Fury is already interesting because of their representation by different promoters (Al Haymon of Premier Boxing Champions for Wilder, Arum and Top Rank for Fury), and because of the convoluted way it came about. The first fight between the two was a split draw, and Fury beat Wilder via technical knockout in the rematch, but the third fight was only set up thanks to a court ruling. And that third fight was then rescheduled from July to October following Fury testing positive for COVID-19.

And Wilder has said a lot of things about how he doesn’t want to be doing this fight, including that he was offered more money to fight Anthony Joshua instead (which Joshua promoter Eddie Hearn confirmed). So there’s a lot of tension here. And the actions at Wednesday’s press conference led to the Nevada Sports Athletics Commission actually banning a faceoff at Friday’s weigh-in:

The Nevada State Athletic Commission has barred heavyweight world titleholder Deontay Wilder and lineal champion Tyson Fury from participating in the traditional faceoff at Friday’s weigh-in ahead of their championship rematch.

…”The reason the decision was made, on behalf of the commission, is because the press conference [Wednesday] spoke for itself,” NSAC executive director Bob Bennett told ESPN on Thursday.

As soon as Fury joined Wilder on stage to begin the final prefight news conference inside the MGM Grand Garden Arena, where they will fight Saturday (9 p.m. ET, ESPN-Fox PPV), the two giants went nose to nose and their confrontation eventually erupted into pushing and shoving, forcing security to intervene to keep them apart.

…”The actions of the two fighters pushing each other, which was not staged, is not indicative of the image of our sport as a major league sport, thus having a faceoff is not in the best interest in the health and safety of the fighters, the public and the event,” Bennett said.

…It is an unprecedented move, but it is one Arum said he supported.

“If this fight depends on a faceoff to sell it, we have not done our job,” Arum told ESPN. “They will take pictures, just no faceoff. This commission realizes, because of ESPN and Fox, that boxing is back as a major sport, and we’re not going to f— it up by having these guys push each other or fight each other at a weigh-in.

With that, it’s worth noting that boxing/combat sports events often come with many more conditions on media than we see in other sports, especially when it comes to “official” pre-fight events. One example of that comes from the Mayweather-McGregor press tour, where Ariel Helwani was initially part of that, but was then pulled (per his comments, that was because UFC president Dana White was upset with him). And with these joint events in particular, there’s a long history of assuming the people working for the other network are favoring that network’s fighter. And there are some agreed-upon restrictions set up on what can and cannot happen at certain portions of the pre-fight rituals. And if Arum’s account of Abdo violating the agreed-upon restrictions is correct, he has some reason to be upset.

However, the actual reaction here from Arum is incredibly over the top, and it shows a dramatic lack of understanding of how this rant would be perceived. First, Abdo is not just “this woman from the UK”; she’s quite well-known to American audiences at this point, especially for her soccer work with Fox, CBS and Turner. (This wouldn’t be acceptable even if Abdo had only worked in the UK, but it’s still notable that his attempted slam of her as unknown to U.S. audiences is incorrect.) Beyond that, “Fuck her and fuck them” is a bad comment in general, especially when it’s on the record in front of a wide swathe of media.

Look, if there was some incredible need for Top Rank and Fury to avoid a pre-fight “face off” here, fine. They’re entitled to try and negotiate whatever terms they want, and the “face off” is often a dumb idea anyway. And if Fox and Abdo had agreed to that in advance of this, fine, they’re in the wrong for violating that. But Arum’s particular reaction here was way beyond what it needed to be. And while that kind of over-the-top approach sometimes works fine for boxing promoters, this particular language from Arum seemed extraneous, and deservedly drew him a fair bit of criticism.