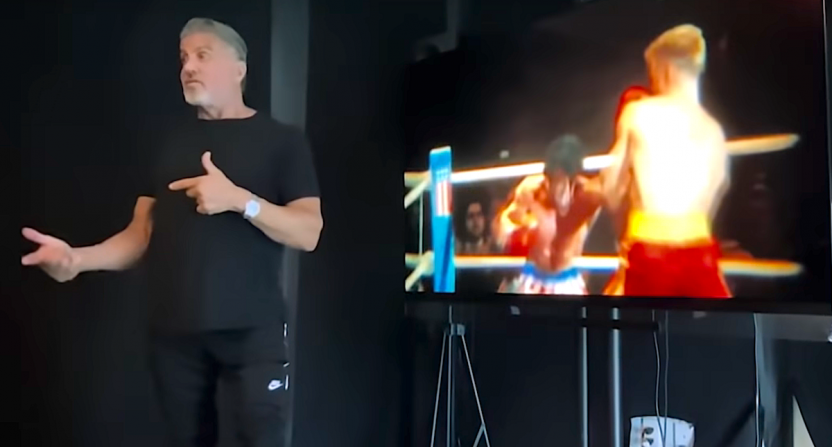 Thursday night (Nov. 11), many Rocky IV fans will go to select theaters to watch Rocky IV: Rocky vs. Drago, The Ultimate Director’s Cut, courtesy of Fathom Events. (Those who can’t make it, aren’t near a theater showing the film, or don’t want to pay the premium ticket price can watch Rocky V. Drago on digital video Friday, Nov. 12.)

Sylvester Stallone has added 40 minutes of never-before-seen footage to his director’s cut, boosting the run time of Rocky IV from 91 minutes to more than two hours of cinematic boxing drama. Fans and film buffs who want to see the process of making the director’s cut have an opportunity to do so with a documentary now available on YouTube.

The Making of Rocky vs. Drago by Sylvester Stallone follows Stallone as he edits the new version of the film together. As he works with an editor to cut in the new footage, Stallone also shares his feelings about Rocky IV, the Rocky franchise and how it affected his life and career, how to edit montages, and what he thinks about director’s cuts on the whole.

If you want to watch the whole documentary (which runs 93 minutes —  longer than the original version of Rocky IV) embedded below. Perhaps you’d prefer to come back after watching Rocky vs. Drago, however.

Anyone who was worried that the 40 minutes of extra footage would include more scenes of Rocky’s brother-in-law Paulie with the robot he was given as a gift will be relieved to see that’s not the case. And it’s entertaining to see Stallone notice editing mistakes that weren’t caught 35 years ago, such as Apollo Creed not wearing gloves, then suddenly having them on in the same scene.

Filmmaker John Herzfeld tells viewers from the start that the entire doc was filmed on an iPhone, so this isn’t necessarily the most visually compelling footage. But Stallone provides some intriguing insight into the filmmaking and editing process for the audience.

For instance, he admits that he had to learn patience with letting a scene play out as a filmmaker. Back in 1985, however, he had an MTV mentality of constant cuts and visuals powered by music.

One of the more curious things Stallone says can be seen in the clip above. He doesn’t consider the Rocky films to be sports movies. To him, dramas are different. That seems oddly dismissive of the genre, considering that many fans consider these the definitive example of sports-related storytelling. Sure, there’s more than boxing to Rocky Balboa. But how much narrative fuel would these movies have without the sport?

“Every time I go in there and I think we’re done, we’re not done,” Stallone says at one point. “It’s almost like panning for gold, you know? ‘Let’s go back for one more nugget,’ and then you find one, and then you get maybe two nuggets, three nuggets, and before you know it, you’re digging a new mine.”

Even something like the angle of a particular shot becomes important when coordinating it with the cut to the next shot. It might seem like the smallest thing, but Stallone explains how such a change serves a storytelling purpose. Directors can tinker endlessly with their film, but eventually have to let go for it to be finished. Some might say Stallone has never let go of Rocky Balboa, but this doc shows why he keeps getting pulled back to his story.

Rocky IV: Rocky V. Drago, The Ultimate Director’s Cut shows in select theaters for one night on Thursday, Nov. 11. You can purchase tickets through Fathom Events. The expanded film will be available on digital video and on-demand the following day, Nov. 12.