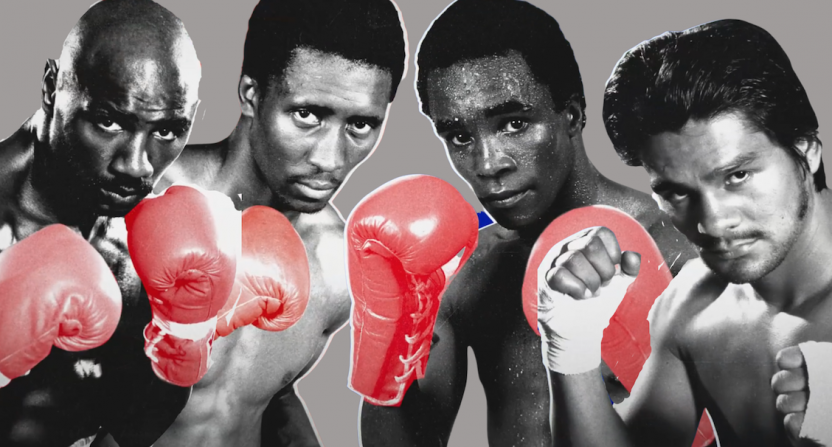 If you missed the first episode of Showtime’s The Kings amid the Floyd Mayweather-Logan Paul exhibition card last Sunday, the boxing docuseries is a four-part film with Episode 2 airing tonight (June 13) at 8 p.m. ET and the subsequent installments following on the next two Sunday nights.

(All four episodes are currently available for streaming at the Showtime website and app.)

The Kings chronicles a showcase era of boxing during the 1980s when the sport was trying to find new stars following Muhammad Ali’s retirement and the nation was struggling through recession. Sugar Ray Leonard, Marvin Hagler, Roberto Duran, and Thomas Hearns became known as “The Four Kings” and headlined a showcase era that included nine championship fights among them.

The series begins with Leonard’s emergence on the national stage after winning a gold medal at the 1976 Montreal Olympics. Leonard didn’t intend to continue his boxing career, but family health concerns necessitated becoming a professional to earn money. What began as a noble intention eventually became the driving motivation throughout a career during which Leonard became one of the most recognizable celebrities in the world.

Leonard’s success and popularity made him a target for resentment from rivals who believed that he benefited from privilege and a national TV profile, rather than working his way up the ranks. While that perception wasn’t true, it stuck to Leonard as the impoverished backgrounds of Hagler, Hearns, and Duran became key parts of their respective narratives.

Each of the other three boxers are featured throughout the docuseries, chronicling their efforts to gain national exposure and support for championship contention. But none received the same love as Leonard, whose telegenic looks, witty delivery (which also made him a successful broadcaster), and media accessibility led to mainstream stardom.

Hagler’s fortunes are tied to Leonard’s throughout the careers, beginning with both boxers fighting for title belts on the same card. Yet while Leonard won and ascended into stardom, Hagler fought to a controversial draw which stalled his career for many years. Hearns tore through the rankings and progressed through weight classes until he couldn’t be ignored. And Duran was an international boxing sensation whose status as the best fighter in the world was validated by defeating Leonard.

But as the docuseries details, this era of boxing revolved around Leonard and the other three fighters were largely defined by their bouts against him, especially Duran. All four fought each other, however, arguably highlighted by the 1985 clash between Hagler and Hearns which is considered one of the best fights of its time despite lasting only three rounds.

Archival footage obviously does much of the storytelling, but director Mat Whitecross (Oasis: Supersonic) uses slow motion, photo stills, and sound effects to emphasize pivotal, decisive punches in many of the matches. Those blows — several of which resulted in knockouts — resonate even more with these techniques.

Interviews with the boxers themselves, in addition to analysts Al Bernstein and Steve Farhood, writers Jerry Izenberg and Thomas Hauser, manager Jackie Kallen, and referee Richard Steele provide much of the narration. Though it’s notable that no one appears on screen with their words, as in most documentaries, unless it was an archival interview. As a result, we only see these fighters age in the ring, not in their post-boxing lives.

Whitecross also utilizes academics including Bonnie Greer, Michael Ezra, Jeffrey Sammons for insight when the series attempts to connect the 1980s era of boxing with what was happening in politics and culture during the same period.

Sports and culture are undoubtedly connected, but pairing the Four Kings’ endeavors in the ring with the presidencies of Jimmy Carter and Ronald Reagan felt like a stretch. It creates a shaky storytelling structure (yet has some good cliffhangers, a la The Last Dance) and is the weakest aspect of the four episodes.

Maybe Leonard was the embodiment of Reagan’s America, celebrating wealth and ignoring the struggles of the middle and lower class. That argument is certainly made, and maybe some viewers will find it a convincing one.

But The Kings works much better when it focuses on boxing, rather than expand its scope to the culture at-large. And these four fighters deserve it. Each is a compelling figure on their own, but their stories intersect and it’s impossible to tell them without incorporating their conflicts with the other fighters.

Three of the four fighters follow a similar arc as well, continuing their careers long after they should have retired. Hagler walked away, though largely out of disgust, and enjoyed the good life. Unfortunately, he’s the one who’s no longer with us. It’s too bad he didn’t see this celebration of his career, along with his peers who made boxing so memorable for generations of fans.

Part 2 of The Kings premieres Sunday night (June 13) at 8 p.m. ET on Showtime with the final two episodes airing the next two Sundays. All four episodes are currently available for streaming on the Showtime website and app.