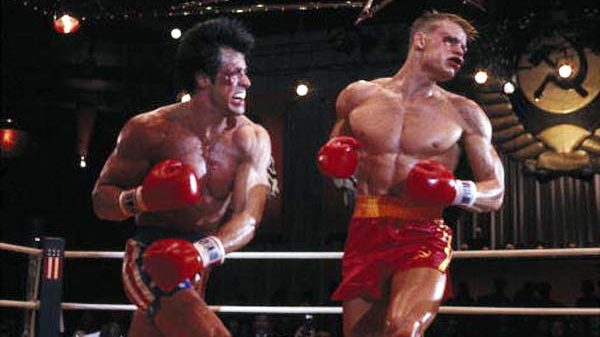 Rocky IV is returning to theaters for a one-night event in November. Though the 1985 Cold War boxing spectacle will show two weeks before Thanksgiving, fans will surely be thankful to star and director Sylvester Stallone for giving them the opportunity to see the film with 40 minutes of never-before-seen footage.

Fathom Events will present Rocky IV: Rocky V. Drago, The Ultimate Director’s Cut in select theaters throughout the country on Nov. 11. The event will also include an introduction by Stallone, a Q&A with him after the film, and a behind-the-scenes look at the making of the director’s cut.

“The fight scenes are more intense, the music is more powerful and the drama is heightened as world heavyweight champion Rocky Balboa (Stallone) must defend his title once again, this time against his most formidable opponent: Ivan Drago (Dolph Lundgren).”

Check out the trailer for this expanded edition of Rocky IV:

As you probably noticed at the end of the trailer, if you prefer not to see Rocky V. Drago: The Ultimate Director’s Cut in theaters (or pay the extra Fathom Events ticket price), the film will also be available on digital video and on-demand the next day, Nov. 12.

Stallone also released a poster image for Rocky V. Drago on his Instagram:

If you’re unfamiliar with Rocky IV or need a refresher summary, the fourth film in the Rocky series follows Rocky Balboa planning to retire after winning the world heavyweight championship. But Russian fighter Ivan Drago, the product of modern, high-tech training methods (and, well, chemical enhancements) wants to challenge Balboa. Rocky’s friend and former rival Apollo Creed decides to fight him instead and suffers fatal injuries during the bout. Seeking revenge, Rocky agrees to fight Drago in Russia.

So what will be included in those 40 minutes of extra footage? It appears we’ll see extended boxing scenes. There will probably be some scenes of Paulie with the robot Rocky bought for him. The trailer shows scenes of Rocky with his son, Rocky Jr. Maybe we’ll get more of Apollo Creed entering the ring while James Browm performs “Living in America.”

OK, with all due respect to the Godfather of Soul, that sequence probably goes on long enough as it is…

What we really need from a big chunk of those 40 previously unseen minutes is more scenes of Rocky training old-school with farm equipment in a barn, among the rocks and snow in Russia. Yes, more training montage!

Best song in a sports movie?

It’s not even close. ⬇️ pic.twitter.com/EPmHdTzUcW

Actually, make it longer. Throw in some of the other classics from that soundtrack, like John Cafferty’s “Heart’s on Fire,” “No Easy Way Out” by Robert Tepper, and Survivor’s “Burning Heart.” Use the original Rocky theme, Bill Conti’s “Gonna Fly Now” and Survivor’s “Eye of the Tiger” from Rocky III, if needed.

More jumping rope! More speed bag! More chopping wood! More running through knee-high snow! More pulling sleds with Paulie! Yeah, yeah — mix in some of Drago’s sterile training environment with machines, computers, and needles dripping with steroids. Then get back to the barn.

That can probably fill 40 minutes, right?

Rocky IV: Rocky V. Drago, The Ultimate Director’s Cut will show in select theaters on Nov. 11. You can purchase tickets through Fathom Events.

Related: Sylvester Stallone is working on ideas for a ‘Rocky’ prequel series