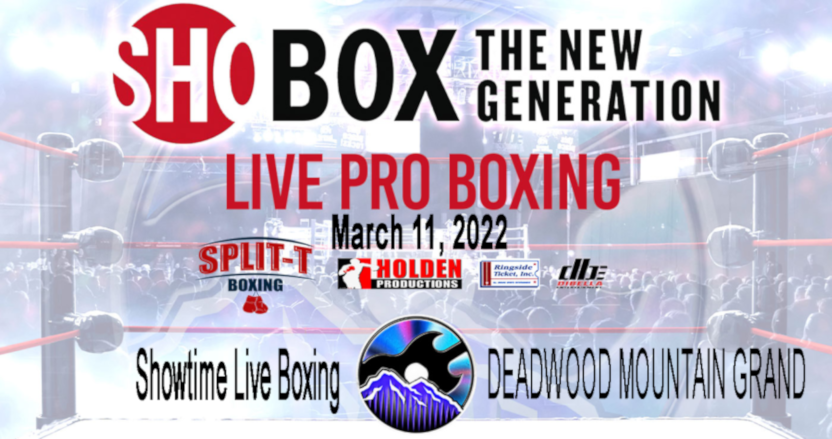 Friday night’s ShoBox: The New Generation card on Showtime (beginning at 9:35 p.m. ET) is headlined by Ardreal Holmes and Vernon Brown, but it’s the opening fight to the three-fight card that has an interesting announcing angle. There, 21-year-old Giovanni Márquez (a 2021 National Golden Gloves champion) will make his professional debut against Nelson Morales in a four-round, super lightweight bout. Márquez’s trainer and cornerman will be his father Raul, a famed boxer and analyst, who will be returning to his usual ShoBox ringside analyst role for the night’s second (Luis Acosta-Edwin de los Santos) and third (Holmes-Brown) fights. Both Raul and Giovanni Márquez spoke to AA about this this week, with Giovanni saying training with his father has been great.

“We’ve been training hard every day and getting a lot of great sparring in here in Houston. Working with him is just a great thing; he has a lot of knowledge in the sport, and he’s just pouring all that knowledge into me.”

“It’s definitely been easy, because I know his intentions are pure at the end of the day. So if he tells me something that might not sit right with me, I know at the end of the day it’s for my best, whether that’s ‘Pick up your hands,’ things of that nature. I know it’s for my best interests. So having my father in my corner is just a great thing.”

Giovanni said he’s thrilled to get the chance to make his professional debut on ShoBox, as he watched so much of Showtime’s boxing coverage over the years.

“I was always tuning into ShoBox. I always envisioned myself fighting on ShoBox. Never did I envision I’d be making my full debut on ShoBox, but here we are, and I’m going to take full advantage of the opportunity.”

“To be making my professional debut on such a huge platform like Showtime, ShoBox, it’s just a dream come true. I’m thankful and grateful for the opportunity. And I’m just looking to go out there and make a great first impression on the boxing world.”

Raul said this is going to be a wildly different broadcast for him with him going from trainer/cornerman to analyst in the same card, but he and the family are excited to see what Giovanni can do on this stage. And he said he thinks the experience Giovanni received from attending fights where he was working as an analyst has been helpful in getting him used to the stage.

“It’s very different, because I’m going to have to work his corner, be in the locker room, get him ready, get him pumped up. We’re all excited, the whole family’s very excited, Team Márquez is very excited. Giovanni, he’s very focused, and he’s taken all this pretty well. I know it’s a lot of pressure in some kind of ways, but I think the kid is built for this.”

“He’s been around this for a long time, I’ve taken him to big events. The media here in Houston, they really support us. Even when my other son Arturo was pro, they would always cover us. And Giovanni’s being doing a lot of interviews here, not only when he won the Golden Gloves, when he was doing other fights. So he’s used to doing interviews. He’s been a lot in the limelight, and I think he’s kind of used to it. I think he takes it very well, he takes pressure very well. He’s very focused.”

Raul said while the corner to analyst switch mid-card will be new for him, he’s confident he can do it.

“Honestly, I’m not worried about that. I’ve been doing TV, doing this for many years. I’ve broadcasting since 1996 when I was still an active fighter, on all the platforms, HBO Latino, Fox Deportes, NBC Sports. I’ve worked with the top boxing analysts that you can think of, I’ve done international calls, I’ve been around. And Giovanni just has to do his job; I’ll warm him up good, get him ready, pump him up. But he’s got his family behind him, he’s got his brothers there, his mom there, my wife will be there, his stepmom, so everybody’s going to be there to support him. And he’ll do his thing, and then I’ll go back and get dressed up and call the rest of the fights. I’m ready for it.”

He said while others have handled trainer/corner roles in fights and analyst work on the same card before, he believes it’s new to have a father and son doing it.

“It is a challenge. I don’t think it’s ever been done before with a father-and-son combination. I think maybe Teddy Atlas has done it, Joe Goosen, trainers who went back into the booth. It’s going to be fun doing this.”

And he said Giovanni has the real tough role here.

“Both of us will work our butts off, but at the end of the day, he’s the one that will have to go in the ring, and show his skills, and deliver. And he deserves it. And there will be people who say ‘He’s just on Showtime because his dad works for Showtime.’ I don’t believe that. He’s on Showtime because he’s got the skills, he’s got what it takes to be on Showtime. They’re not just going to put any kid on Showtime. He’s talented, he’s a talented kid, and he’s going to show why he’s on there.”

Raul said broadcasting has been a passion for him even while he was still fighting, and it’s something he attacked the same way he did his career.

“When I do something, I do it 110 percent. I’m a guy that’s non-stop, I’m always busy. I’ve got a growing family, I’ve got five kids, I got remarried, I’ve got a four-year-old and a three-year-old. I run a boxing gym, I do broadcasting, I’ve got Giovanni’s career. When I was an amateur boxer, I wanted to be an Olympian, and sure enough, I made the Olympic team, I made it to two Olympics. I didn’t medal, but I had a big career as an amateur, I did great. When I turned pro, I said ‘I want to become a world champion,’ and I did become a world champion, maybe not a big name like a Canelo or whoever, but who does that? I was a world champion.”

“And when I got into the broadcast booth, I always wanted to be one of the best broadcasters out there.  When I started in 1996 and worked with HBO Latino, I worked with Jim Lampley and Max Kellerman and George Foreman, he would always give me advice. I worked with Bob Papa, I worked with a lot of guys, and I always said ‘Man, I want to be on a bigger platform. I don’t want to be limited to just Spanish.'”

“I did some English broadcasts for international calls, and sure enough, 10 years ago, I got the opportunity to do Showtime in Spanish. And then that same year, I got the opportunity to do ShoBox with Barry Tompkins and Steve Farhood, who are Hall of Famers, and now Brian Campbell. So I wanted to be a top broadcaster, and I’m up there; amongst ex-fighters, I’m pretty good at what I do as a broadcaster.”

He said he’s now approaching training the same way, and he loves working with his son.

“And now it’s a new challenge as a trainer. I’ve never really done this; I’ve trained and helped in the past, but now I’m fully focused on my son Giovanni. I think he’s the complete package, I think he’s got all the tools for me to work off of. And I know the boxing game, I’ve been in this for so many years.”

“And now as a broadcaster, I see so many other fighters, contenders, champions, and you learn so much. So I want to become a respected boxing trainer, that’s my goal now. And I think Giovanni, with his skills and my mind and my experience, we’re hoping to go a long way in the boxing world.”

ShoBox: The New Generation on Friday, March 11 is live on Showtime at 9:35 p.m. ET/PT from Deadwood Mountain Grand Hotel in Deadwood, S.D.