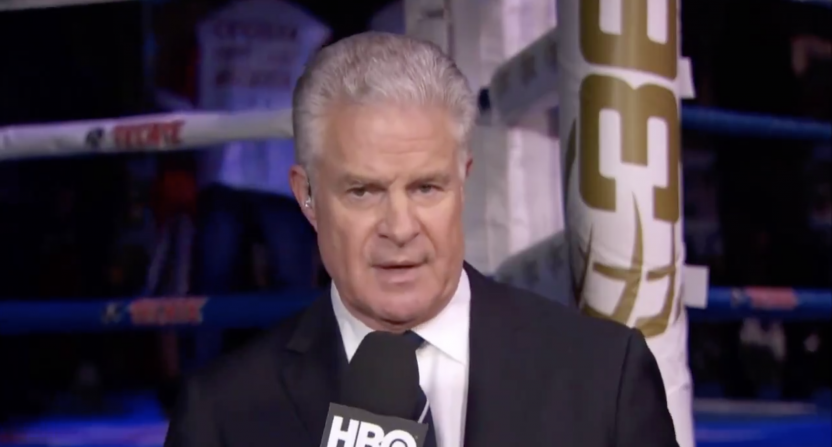 One of the most notable on-air presences during HBO’s 45-year run in boxing was Jim Lampley, who served as host and blow-by-blow announcer of their famed World Championship Boxing franchise for almost 30 years. Lampley was the face of boxing on HBO for many, and his teary signoff on their final broadcast in December 2018 was quite the moment. And while many others associated with HBO’s boxing coverage have popped up on other boxing broadcasts in the last few years, Lampley (age 72) really hasn’t. That’s now going to change, though, as he’s signed with Triller Fight Club as their new main play-by-play voice, starting with their June 19 card in Miami. Here’s more on that from Jason Price at Icon vs. Icon:

Triller Fight Club is a partnership between Triller and Snoop Dogg and is spearheaded by Ryan Kavanaugh. Produced by “So You Think You Can Dance” co-creator Nigel Lythgoe and featuring a pre-event concert by superstars Meek Mill, Myke Towers, Snoop Dogg and Lunay (more to be announced), the Fight Club event is an unprecedented evening combining the world’s best boxers and entertainers in a not-to-be-missed, four-quadrant entertainment extravaganza.

“It is an honor and a privilege to welcome the preeminent voice in boxing, Jim Lampley, to Triller Fight Club,” Ryan Kavanaugh said. “We will blend all the best elements of music, entertainment and sports, and there is no one better to help lead our broadcasts for fans of all ages than Jim.”

“I am impressed that Triller Fight Club is aggressively seeking to put together the best telecast possible, and it is that mentality that makes Triller the best possible platform for my return to ringside,” said Lampley. “This first telecast features Teofimo Lopez, conqueror of the great Vasiliy Lomachenko and an exciting new talent who has already made a historic mark on the sport. That says it all for me.”

Some of the headlines Triller has made on the boxing side so far have been for stranger fights such as Jake Paul-Ben Askren (and for their aggressive lawsuits against websites and individuals over illegal streams of that fight). But Paul has since moved on to Showtime Sports, and this particular card features many more established professional boxers, including López and Kambosos (and on the women’s side, they’re showcasing a clash for the middleweight undisputed world title between Franchon Crews-Dezurn and Erin Cederroos). So it makes more sense for Lampley to get involved with this promotion now rather than when Paul was headlining their events.

How long will the Lampley-Triller partnership last? We’ll have to see. But a multi-fight deal is promising, and their hiring of Lampley at all suggests they’re going for more respectability in boxing circles. And the card they’ve set up certainly will help with that as well. Meanwhile, boxing fans who have long enjoyed Lampley’s work will get to see him calling fights again, and that’s pretty cool.