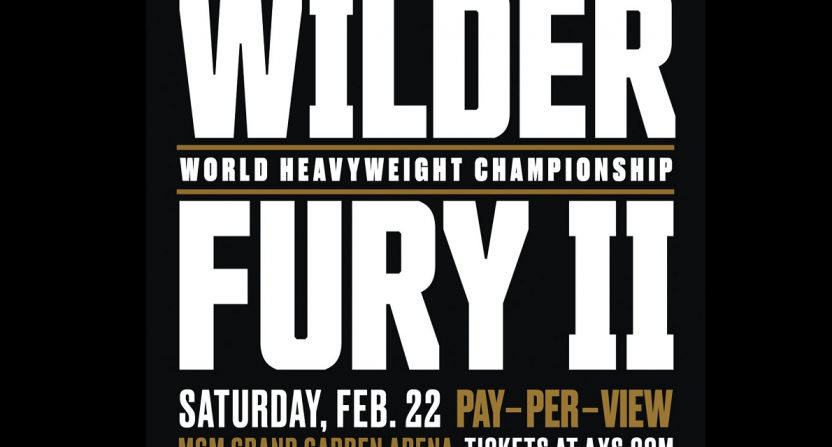 When Tyson Fury signed a deal with Top Rank earlier in 2019, it blew up any immediate hope for a heavyweight championship rematch with Deontay Wilder. That was a surprise, considering their entertaining draw bout in December of 2018 seemed like an easy choice to run back.

But Top Rank has a deal with ESPN, while Wilder’s PBC is partnered up with Fox Sports. That meant any rematch would have to overcome not only the usual hemming and hawing associated with boxing matchmaking, but also somehow find a way to make both network competitors happy. Today, we found out how that was going to happen: a jointly-produced MGM Grand pay-per-view card, on February 22nd, 2020. The deal reportedly includes a provision for Wilder-Fury III, regardless of the outcome in February.

ESPN’s Dan Rafael broke down how we got to this point:

Top Rank and Premier Boxing Champions announced on Friday that the fight, as expected, will take place at the MGM Grand Garden Arena in Las Vegas and will headline a joint pay-per-view between Fury broadcaster ESPN and PBC partner Fox, which also handled Wilder’s Nov. 23 pay-per-view fight, a rematch against Luis “King Kong” Ortiz at the MGM Grand.

Wilder and Fury finally did agree to the rematch in a rare deal between rivals Top Rank and PBC, one that also includes a third Wilder-Fury bout. But before the rematch would take place, the deal called for each to first have two interim bouts. Wilder and Fury got through those bouts to set themselves up for much bigger paydays than they would have received had they had the rematch right away.

The first match was legitimately entertaining, and is perhaps mostly remembered for Fury somehow getting off the canvas in the 12th round after a vicious Wilder knockdown.

We’re also going to be seeing quite a lot about this fight between now and February 22nd, and not only because it has the potential to be a good one. Getting both ESPN and Fox Sports on board means we’re going to get the typical cross-promotion we’d see on one network, but this time across two families of networks, both of which have major properties on which to promote the fight between now and February. Fox obviously has a weekend of NFL regular season games left, in addition to the NFL playoffs and this year’s Super Bowl. ESPN has their own upcoming NFL playoff game, along with plenty of noteworthy NBA and college basketball contests, among countless other opportunities.

It’s probably going to be somewhat inescapable. Hopefully the fight itself lives up to the likely billing.

Fortunately they always do, right?