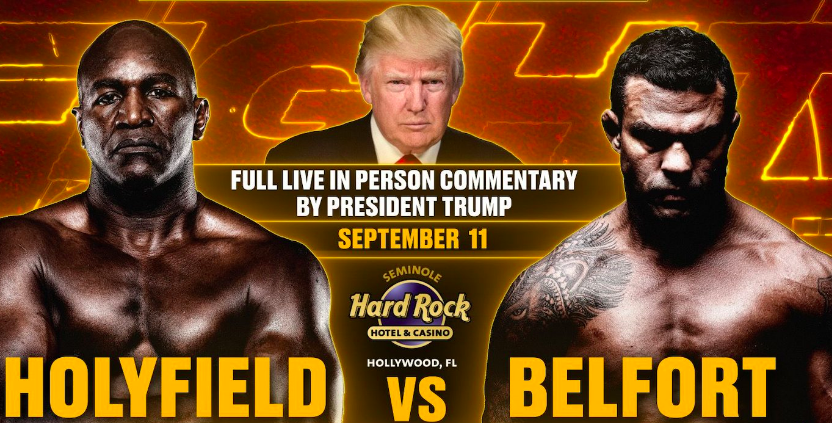 Before he became the President of the United States, Donald Trump was a mainstay of the Atlantic City boxing scene, hosting various high-profile matches at the now-defunct casinos that bore his name there. Still a fan of the sport, he’s returning to the ring this weekend to provide guest commentary on a “gamecast” of Saturday’s boxing broadcast by Triller Fight Club, which will be headlined by Evander Holyfield vs. Vitor Belfort.

Former President Donald Trump will be part of an alternate commentary feed for the Evander Holyfield-Vitor Belfort fight on @Triller PPV this Saturday night. pic.twitter.com/LEJ4N5Cpeu

Along with son Donald Trump, Jr., the former President is expected to provide commentary for the four-fight telecast, which also includes Anderson Silva vs. Tito Ortiz and David Haye vs. Joe Fournier.

Triller’s main broadcasting option for the event will be Jim Lampley and former champion Shawn Porter. Viewers who pay $49.99 for the event, which takes place on September 11 at the Hard Rock in Hollywood, Florida, will have the option to purchase the main broadcast or the Trump “gamecast.” The free preview of the event starts at 6 p.m. ET with the paid broadcast beginning at 7 p.m. ET

“I love great fighters and great fights,” Trump said in a statement on Tuesday. “I look forward to seeing both this Saturday night and sharing my thoughts ringside. You won’t want to miss this special event.”

Triller has dabbled in celebrity commentators for their fights before. Snoop Dogg’s commentary during the Mike Tyson-Roy Jones Jr. telecast as well as the fight between Jake Paul and Ben Askren made headlines.