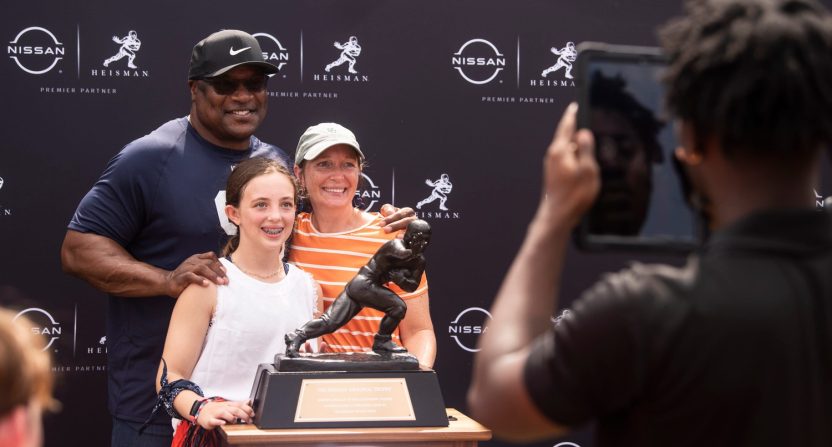 Everyone who knows him has a story about Bo Jackson.

Somebody saw Jackson (seen above posing for pictures with fans ahead of a Sept. 17 Auburn game) do this. Somebody saw Jackson do that. The tales are sometimes fantastical, but you can’t dismiss them. That’s amazing considering the extraordinary feats we know for sure. He’s almost like the sports version of Paul Bunyan where the facts are occasionally clouded and it is difficult to say with certainty where the truth ends and the mythology begins.

In his latest sports book, The Last Folk Hero: The Life and Myth of Bo Jackson, author Jeff Pearlman explores one of America’s greatest athletes. Pearlman has tackled a variety of subjects including biographies on Barry Bonds, Walter Payton, Roger Clemens, and Brett Favre. This was different. This is Bo Jackson.

“As I get older, I worry about people forgetting certain athletic figures,” Pearlman, 50, told Awful Announcing. “I don’t know if it matters to these guys, but it definitely matters to us as writers. We want people to remember Bo Jackson. We want people to know his amazing exploits, that this was the greatest athlete that ever walked the earth. For me, I love dipping into the past, and I really want to preserve his legacy.”

How much did Jackson cooperate with Pearlman? Very little. Just a 30-minute conversation in the early stages. But Pearlman is a dogged reporter who also “got lucky.”

To get as close to the truth as possible, Pearlman conducted over 700 interviews, the most he has ever done for a book. He also discovered a treasure trove of information: notes, transcripts, and audio recordings that the late Dick Schaap donated to the Auburn University library after Schaap coauthored the 1990 autobiography Bo Knows Bo.

“I felt like I was having conversations with 28-year-old Bo Jackson,” he said. “It was magical.”

Jackson was the first modern-day superstar two-sport athlete. The 1985 Heisman Trophy winner out of Auburn was so exceptional that he was a Pro Bowl running back in the NFL and an All-Star outfielder in Major League Baseball.

For a generation, his exploits were superhuman. We saw him sprint by other football players with breathtaking speed. We saw him lead off an All-Star game with a towering home run with former President Ronald Reagan watching. We saw him run up a wall like Spider-Man.

These were moments forever burned into the minds of people of a certain age. Many wondered about Jackson’s talents. Curiosity was piqued by the famous Bo Knows commercials.

Could he really do anything?

To illustrate the mythology, Pearlman opens his book with a story that seems straight out of Mission: Impossible. As the Chicago White Sox were flying home, suddenly the engine caught fire.

Everybody braced themselves for the worst, except for one person.

“The cockpit door opens and out walks Bo Jackson who was sitting in the cockpit talking to the pilots,” Pearlman said. “He says ‘Everything is going to be OK. These guys have it under control.’

“But then someone else said that’s not how it happened. ‘Bo Jackson was sitting next to me when the plane was going down. He got up and walked into the cockpit to help the pilots fly the plane.'”

Pearlman never did find out which version is the truth.

The days of that kind of mythology are long gone. Our lives are meticulously documented by us or others. There are very few secrets.

Perhaps that’s why Jackson is our last sports folk hero.

“Nowadays you can record everyone doing everything,” Pearlman said. “If LeBron James is working out, he’s going to post it on Instagram. (Back then), you didn’t have that so it’s a lot of mythology. With some stories, you have to roll with people’s memories to a certain degree.”

Pearlman has his own Jackson story. This one was easier to verify.

After visiting the site of Jackson’s childhood Alabama home, Pearlman took a brick from the now vacant lot. The house had been demolished long ago, but the foundation remains. On his way home, Pearlman was stopped by airport security who were curious to know why he was boarding a plane with a potentially dangerous object.

Pearlman explained that the brick was a memento.

“‘They called over another security guard,” he said. “And they’re like ‘This guy wants to bring a brick on the plane.’ ‘We don’t allow bricks.’ ‘He is a reporter, and he got it from Bo Jackson’s house.’ ‘Ok, we’ll let you through.'”

The Last Folk Hero: The Life and Myth of Bo Jackson is available now for pre-order from Amazon or independent bookstores. It officially releases on Tuesday.

[Photo from The Montgomery Advertiser, via USA Today Sports]