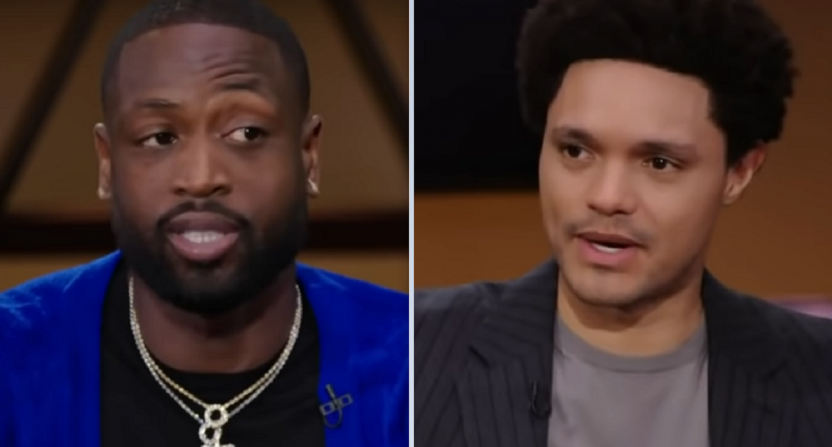 Former NBA star and current TNT broadcaster Dwyane Wade appeared on The Daily Show with Trevor Noah Wednesday night to promote his new memoir, Dwyane, and talk about life after a 16-year professional basketball career. Noah referred to the book as “a memoir in pictures,” rather than text complemented with a few photos. Wade agreed with that classification.

“I didn’t want to go at it from a standpoint of just words on paper,” Wade told Noah. “I’ve done that once and it was great. But this time, thinking about my responsibility and my role, I take it very seriously as a public figure.

“Just understanding that little Dwyanes need something to see. Reading something is great, but when they can actually see the image or something or someone, I think that right there is more powerful.”

Check out the interview for yourself, if only just to see Wade’s quick hands when Noah nearly spills his coffee mug:

Discussing the book, it became apparent why Noah wanted to have Wade on his show. He’s devoted quite a bit of time to athletes’ efforts to raise awareness of social issues and mental health in interviews with sports figures including Russell Westbrook, Chris Bosh, and Carmelo Anthony.

The conversation also included finding a new purpose outside of basketball, the empowerment of teaming up with Bosh and LeBron James, and his love of karaoke. But maybe the most important part of the interview included Wade explaining what he learned as the parent of his transgender daughter, Zaya.

Wade has talked about this before, notably with Robin Roberts on Good Morning America. But for those new to Wade’s story, it’s insight worth sharing again.

Meet Zaya. She's compassionate, loving, whip smart and we are so proud of her. It’s Ok to listen to, love & respect your children exactly as they are. Love and light good people. pic.twitter.com/G2lLVdD2VT

FULL INTERVIEW: NBA superstar @DwyaneWade opens up to @robinroberts about daughter Zaya’s gender identity and why it was important to feature this journey his new @ESPN documentary. https://t.co/ZdCAUU3gAQ pic.twitter.com/Bf6xUJQvcx

“When you have a personal connection to something or someone, you take it a little bit more serious,” said Wade. “My daughter, looking at me across the table, this is something I need to deal with, right? In the sense of, I don’t know everything.

Wade also appeared Thursday on The Dan Le Batard Show with Stugotz to promote his memoir and talk about his experiences with Zaya.

Dwyane is now available in bookstores and from online booksellers including Amazon, Barnes and Noble, and Bookshop.org.