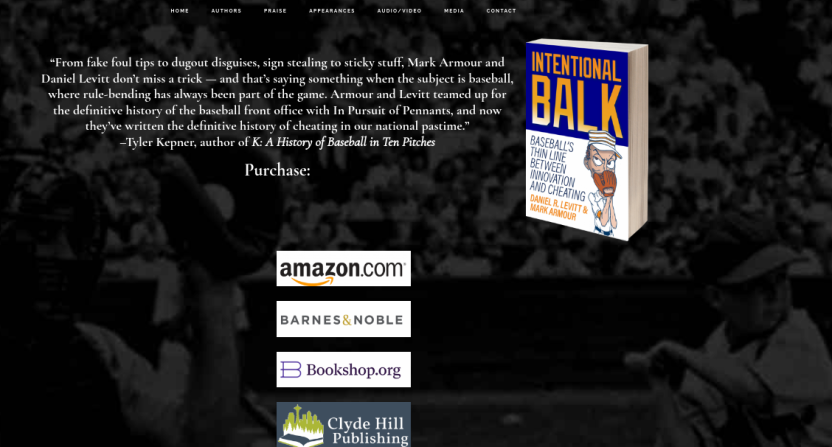 This year’s World Series between the Philadelphia Phillies and Houston Astros had lots of connections between the teams, but one more under-the-radar one is both teams’ past links to sign-stealing scandals. The Astros’ saga from a few years ago is well known, of course. But much less known is the elaborate scheme the Phillies put together in 1899, one of the first sign-stealing controversies.

Both of the Phillies’ and Astros’ sign-stealing discussions are covered in a recent book, Intentional Balk: Baseball’s Thin Line Between Innovation and Cheating. That book, by baseball historians Dan Levitt and Mark Armour, also covers the whole history of sign-stealing in Major League Baseball, and the history of a wide array of other MLB controversies. Other topics include everything from computer hacking to corked bats to altered balls to flooded fields to amphetamines and steroids.

Levitt spoke to AA last week on Intentional Balk, which comes from Clyde Hill Publishing. He said he and Armour got the idea for this book from seeing how recent controversies on steroids, sign-stealing and altered balls were often discussed in isolation. And that’s isolation both from the history of that particular tactic and from the history of other MLB rule-breaking.

“Mark and I, my co-author Mark Armour, are baseball historians, and we’ve always been interested in why things turn out the way they do,” Levitt said. “With all the various sort-of cheating scandals that have come around, recently anyways, between steroids and sign-stealing and stuff on the baseball, they all got treated very discretely. There was sort of this discussion over how bad each were.”

Armour and Levitt had previously each written several books on their own, but they’d teamed up for two previous titles, In Pursuit of Pennants: Baseball Operations from Deadball to Moneyball and Paths to Glory: How Great Baseball Teams Got That Way. Levitt said this particular project, which started two or three years ago, came out of those other joint books.

“We’ve each written books individually, but we’ve also written books together which were on team-building, and innovation in team-building. And one of the interesting things is that this in some ways is a continuation of that theme. The innovators in team-building are kind of the ones who maybe, at least at the team level, kind of push over the line. In 2017, we were all talking about the Astros, and that was the organization you hold up as being the geniuses, which in many ways was true. But then we also had the situation where they were pushing over into the sign-stealing, sort of taking it beyond the line.”

While Levitt and Armour both have long covered baseball history, Levitt said much of what they wound up including in this book was new-to-them material they found through research, not things they were aware of when they came up with the book idea. He said one surprising thing on sign stealing was how early it started and how sophisticated it was.

“A lot of it was stuff we uncovered. 1899 was really the first sign-stealing scheme, the Phillies were using binoculars from center field. And the modern prism binoculars were really only introduced in Germany in 1894, and five years later, they’re over here and a team’s using them to steal signs.”

And he said that wound up being particularly interesting with this year’s Phillies-Astros matchup.

“It’s kind of ironic. The Phillies were the first team, or the first known team to have any kind of sign-stealing scheme in place. And they also had one that was very sophisticated, more sophisticated than many; in 1899, they actually had a buzzer system. I just think that makes the story more fun.”

However, Levitt said that shouldn’t be read as those organizations being the only ones to cross lines. The recent sign-stealing scandal also had some implications for the Yankees and Red Sox, and many other teams have been associated with sign-stealing over the years. And when it comes to attempts to obtain unfair advantages in general, he said most teams have done something at some point.

“One of the interesting things is that if you go through the book, you can find a story for pretty much any team sort of cheating, whether it’s on the field or in the front office.”

Levitt said an interesting element of the sign-stealing discussion is that for much of MLB’s history, even sign-stealing with mechanical aids like binoculars, buzzers, and sign-relay systems (as compared to the often-tacitly-approved approach of a runner on second stealing signs without aids) was not explicitly prohibited.

“What I didn’t realize, and was fascinating, was there was actually no rule against sign-stealing, despite the fact that everybody felt it was illegal. Otherwise, why would you hide it and deny it? But there was not actually a rule against it, which, on our other theme, that leads to controversy and chaos when you have something people believe is wrong and you can’t really enforce it.”

He said league officials often even pushed back on reports of sign-stealing.

“What’s interesting is that the league presidents really had jurisdiction over this until late in the 20th century when the leagues were sort of rolled up and the commissioner’s office took over. And the various league presidents had very different perspectives on it. Ban Johnson, the original American League president, said ‘If I catch anyone doing it, they’re going to be banned for life.’ But that penalty is so out of whack with the crime that they never did it. And plus, when sign-stealing was brought to his attention, he said ‘No, no, there’s nothing here, and by the way, if people keep bringing me accusations, I’m going to fine you.’ Which of course discourages reporting.”

“One of the great stories is from the 1950s. When Paul Richards was the manager of the Orioles, he complained to American League president Will Harridge that the White Sox (who Richards had previously managed) are stealing signs. Will Harridge gave this incredibly feckless answer along the lines of ‘Gee, we don’t really know if this is going on, but there isn’t a rule against it, and even if there was a rule against it, I don’t know what we could do.'”

He said despite that overlooking from the top, though, there were still plenty of complaints about sign stealing, and on-field umpires sometimes pushed back on it.

“There were a lot of different responses. In the early 1960s, this was starting to get out of hand, and the National League said at their meetings that they might do something about it. But they never did. And it wasn’t really until around 2000 that there actually started to be some rules against it. But that didn’t mean people weren’t complaining about it. And there actually were a couple of instances of umpires trying to stop it, looking out to center field and saying ‘You can’t do that.’ There was one Royals-As game where [Royals] manager Whitey Herzog complained and the umpire went out and made [A’s pitcher] Rollie Fingers put away his binoculars that he had out in the bullpen.”

Levitt said with sign stealing in particular, one surprise for him and Armour was just how prevalent some form of this was in MLB history.

“The other thing is just how much of it there was. When we were putting together a chapter to show to some publishers, there was probably like 25,000 words, and we were like ‘10,000 words on all this different sign stealing is enough!’ The volume and ubiquitousness of it during the 20th century surprised us as well.”

Overall, Levitt said he and Armour didn’t try to personally rank different kinds of line-crossing behavior, or even different level of against-the-rules activity within the same form, but rather to illustrate the differing perspectives on all of this over the years. And he said those perspectives have varied widely, especially when it comes to divides between cheating on-field officials might be able to catch and other cheating.

“We’re trying to not so much put our own opinion on it as talk about why there might be different opinions on different things. One is this whole notion of gamesmanship. I think there’s a general feeling that if it’s on the field, it’s the umpire’s duty to catch it, whether if you trap a ball and hold it up like you caught it, or even to a certain degree the spitball. The spitball is sort of viewed as ‘Well, it’s not my job to be honest about it, it’s the umpire’s job to catch me.’ So that’s one thing that makes a difference.”

Levitt said other perspectives change depending on how complicated and effective a scheme is.

“Another one is the sophistication of it. If something has a mastermind, we maybe feel differently about it than some guy going rogue. If it’s using SpiderTack, which is a relatively new higher-tech substance, and high-speed video to help craft these pitches, rather than Whitey Ford putting some Vaseline on it and firing it in to Yogi Berra.”

Levitt said overall, he and Armour are trying to present not just a history of what happened in specific incidents, but also overarching themes around cheating and line-crossing in MLB.

“We try and talk not just about the cheating, but some of the themes. How innovative organizations might be the ones that sometimes step over the line, the idea that there’s some explicit cost-benefit analysis to cheating, ‘What’s the penalty if I get caught versus what’s the benefit to doing the unfair act?'”

Intentional Balk: Baseball’s Thin Line Between Innovation and Cheating is out now, and available from local bookstores, Amazon, and more.