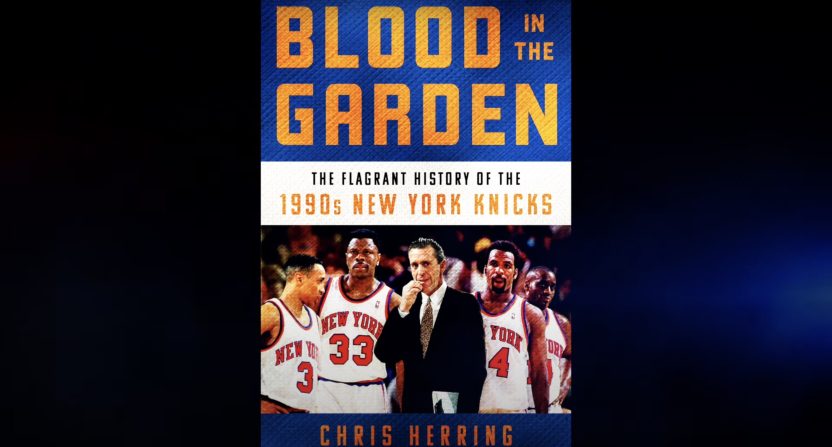 From afar, this seemed like a slam dunk: Chris Herring wrote a book about the 1990s New York Knicks, and Spike Lee is the most famous Knicks fan. Surely, these two were destined to team up. Well, it wasn’t quite that easy.

Blood in the Garden’s journey from a New York Times bestseller to the latest Lee project took some good fortune and good timing. While working on the book, Herring had attempted to interview Lee but never spoke with the Academy Award-winning screenwriter/director. That’s not necessarily surprising. A person as accomplished as Lee gets a lot of requests for a lot of different things from a lot of people.

No harm. No foul. In the world of journalism, sometimes people don’t want to talk to you. But here is where the story takes a surprising twist. A week before the book’s official release in January, an assistant for Lee saw Herring post pictures of the book on social media. In a fortunate stroke of serendipity, that assistant was a former Chicago-area high school classmate of Herring. This was not a close friend. The classmate, someone he hadn’t spoken to in over 10 years, came through with a major assist.

“She brought it to his attention,” Herring, a Sports Illustrated senior writer, said. “He had no idea that anything was happening with the Knicks book. He was kind of frustrated. He’s Spike Lee. How would he not know about a Knicks book that’s about to drop?”

Because Spike Lee is, well, Spike Lee, he immediately got a copy of the book directly from publisher Simon & Schuster. Lee quickly got in contact with Herring and the two spoke on the phone. Herring said he already had received offers to option the book and was hoping that eventually it might be turned into a documentary.

Herring didn’t know what to expect from Lee’s interest.

“I didn’t ask him if he wanted to direct it,” he said. “But I asked, ‘Do you think some of this would translate from a doc standpoint?’ He was like ‘Look man, I’m obviously passionate about a lot of things. But there is very little I’m more passionate about than this team, this era. I have to be the one to direct this.'”

In typical Lee fashion, the two had follow-up meetings courtside at basketball games in Madison Square Garden: Georgetown vs. St. John’s and the Charlotte Hornets vs. Knicks for the annual Martin Luther King Jr. game. As for why the two never connected earlier, the exact reason is unclear. According to Herring, Lee never received the interview request from his staff.

“Clearly, he would have spoken, if he understood what it was,” Herring said.

What will the docuseries look like? That’s still largely unknown. Herring will receive an executive producer credit for what promises to be an entertaining look at one of the most memorable second-place finishers in league history. The 1990s Knicks reached the NBA Finals twice and lost twice.

Those Knicks played a brand of basketball that doesn’t exist anymore. They were like the “Bad Boys” Detroit Pistons but more physical and less talented. Flagrant fouls, hard fouls, fights, and intimidation were in Pat Riley’s playbook. New Y0rk had more enforcers (Charles Oakley and Anthony Mason) than reliable shooters. They had only one future Hall of Famer: center Patrick Ewing.

The Knicks turned basketball into a street battle to help them overcome their deficiencies. They pushed Michael Jordan’s Chicago Bulls to seven games in the 1992 Eastern Conference semifinals and six in the 1993 Eastern Conference finals. The following year, with Jordan retired, they lost in the NBA Finals in seven games to Hakeem Olajuwon’s Houston Rockets.

Herring covered the Knicks for The Wall Street Journal from 2012 to 2016 but was 5-years-old when those Knicks reached the 1994 NBA Finals. He didn’t originally set out to write about this topic but was approached with the idea.

“The publishers are all headquartered in New York City,” Herring said. “Because of that, the people that run them were often Knicks fans. … A handful of publishers said, in part because of how bad the Knicks have been for a long time now, that there might be an appetite for the nostalgia of the 90s teams. In some ways, they are more interesting than a lot of teams because they came so close to winning but didn’t quite get there.”

Herring interviewed over 200 people for the book but interestingly none of the people featured on the cover. Riley, Ewing, Oakley, and John Starks all declined. Mason passed away in 2015. Still, Blood in the Garden has rich anecdotes that should make the docuseries must-see-TV. That includes stories about how Mason once threatened to kill coach Don Nelson, Riley banning the team psychologist, and more.

Herring’s father always wanted him to write a book and often sent his son ideas. Blood in the Garden is dedicated to his late parents Cedric and Marsha Herring.

“It’s a very sobering thought that they’re not here,” Chris Herring said. “I know they’re looking down. (The success) is gratifying, but I wish I could share this with them.”