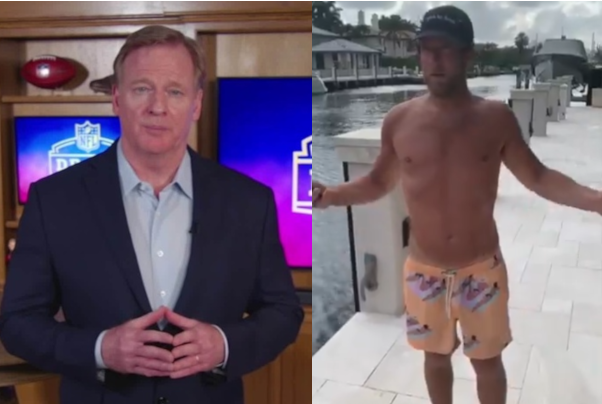 In a Friday news dump for the ages, the NFL has announced that they won’t be letting NFL Draft auction winner Dave Portnoy claim his prize of watching Monday Night Football with commissioner Roger Goodell after all. Portnoy, the founder and “El Presidente” of Barstool Sports, has had various run-ins with Goodell and the NFL before, from a Deflategate sit-in at the league offices in 2015 to a “Goodell Is Hitler” sign in 2016 to pulled Super Bowl credentials in 2017 to a clown towel giveaway, various merchandise battles, and a forcible eviction and detainment at the Super Bowl in 2019. And the NFL cited those issues and others as to why they won’t let Portnoy claim this prize, as Ben Fischer of Sports Business Journal writes:

Portnoy, who won the auction with a $250,000 bid, failed a background check that was a precondition to follow through on the invite to Goodell’s home for a game, NFL VP/Communications Brian McCarthy said. The background check noted Portnoy’s multiple encounters with NFL security and the ’11 incident in which he posted a nude photo of Tom Brady’s then-2-year-old son on Barstool.

The league also pointed to his arrest in ’15 for trespassing at the NFL’s Park Avenue HQ during the Deflategate scandal, and trespassing in ’16 that he posted online. Also, the league noted incidents at Super Bowl LIII week in Atlanta ’19, including falsifying credentials for the opening night media interviews, and then violating a ban by attending the game itself later that week.

Barstool may not have commented to Fischer, but Portnoy delivered comment of his own with a shirtless “emergency press conference”:

“All right, emergency press conference. We all knew this was fucking coming. I’m out here on the riviera, in the sunshine, trying to get my tan on, having a good time. NFL auction experience background check: ‘Mr. Portnoy, we wanted to update you on the background criminal check that was conducted on you in conjunction with your bid on NFL auction #3133625.’ That was, if you’re paying attention at home, a quarter million to watch Monday Night Football with Roger Goodell. Won it fair and square, it was an auction, charity. ‘Based on the background report, you did not pass the NFL’s background check.'”

“What did they say I did wrong? I falsified NFL credentials to gain access to Super Bowl LIII Opening Night in Atlanta in 2019, followed by police detainment. ‘After being informed by police that you were banned from entering Mercedes-Benz Stadium, site of Super Bowl LIII, you defied the police directive and attended the game.’ Criminal trespassing at 345 Park Avenue, that’s NFL commissioner headquarters, where Roger Goodell said he would talk to the media at all times. He did not. He had me arrested like a coward.”

“‘An arrest in 2015 at 345 Park Avenue. Posting nude images of a player’s two-year-old son on the Barstool website in 2011.’ First of all, me and Tom Brady are like this, and the kid had a fucking howitzer. He was like the Gerber baby. And if you can’t handle a big dick joke, then get a fucking sense of humor. ‘Your credit card will not be charged.’ Everything’s deleted. The NFL will donate the amount of the bid to the six non-profits.”

“So Goodell’s out, and we knew it was going to happen. You have cowards, you have mega-cowards, and then you have Roger Goodell. Don’t let me win it and then come up with this. Oh, you did the research on me? You don’t have to do the research on me, you’ve got a file on me the size of [big hand gesture]. People are like ‘Oh, Roger Goodell will play ball, he’ll make himself look good.’ I told everybody Roger Goodell has no self-awareness, no sense of humor, doesn’t know how to deal with a brain like this.”

“And he can’t be the funny guy, he can’t be ‘Oh, I’ll wear the clown shirt,’ he can’t do it. He’s the least funny human of all time. He’s a puppet and he’s a coward and this proves it. So 250,000 grand to charity, I won it fair and square, and they say no. Why? Because they’re afraid of me. They’re afraid of the brain and they’re not going to have some fun with this. So fuck you, Roger Goodell. By the way, don’t do charities and let a guy win it who you don’t want to win it. That’s on you.”

As Portnoy mentions there, instead of taking his bid, the league itself will donate $250,000 to the six charities it’s supported with the draft-a-thon. Fischer writes that they’ll also “select a ‘deserving front line worker’ from the pandemic for the experience” of watching MNF with Goodell. But it sounds like we won’t be seeing Portnoy and Goodell hanging out any time soon.