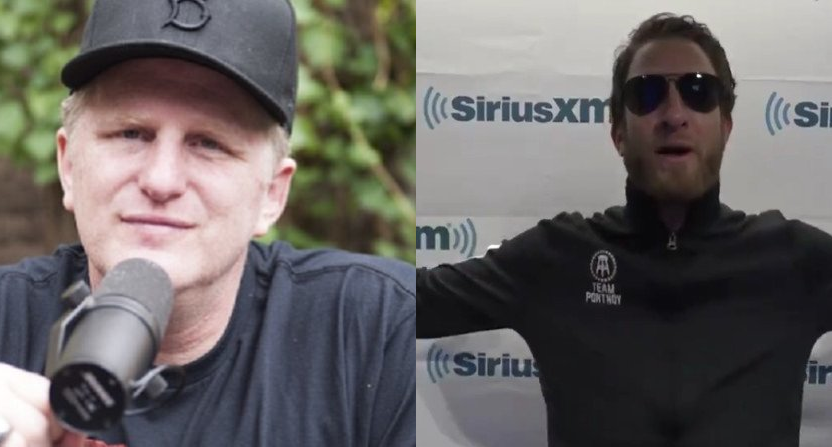 In June 2017, Michael Rapaport (seen at left above) joined Barstool Sports, saying that move was “like Shaq coming to the Miami Heat.” But in February 2018, Barstool fired Rapaport after his involvement in a series of Twitter feuds with various Barstool personalities. Barstool then created a clown t-shirt resembling Rapaport, he sent them a cease-and-desist, and he filed a lawsuit against Barstool, founder Dave Portnoy (seen at right above), and other Barstool personalities for defamation and breach of contract in September 2018, with that lawsuit including “Rapaport claims Barstool engaged in a “campaign to discredit” and embarrass him, including accusing him of having herpes. The actor wants to make it clear in legal documents that he does not have herpes.” Barstool then countersued in December 2018. And now, as Eriq Gardner of The Hollywood Reporter relays, there have been plenty of further filings, with a notable one being Rapaport’s motion for summary judgement (filed Monday). Gardner’s piece also quotes from a previous counterclaim from Barstool (filed in October). And there are a lot of remarkable quotes from both sides. Here are five that stand out:

“A literal declaration of war” (from Rapaport’s latest motion, pages 6 and 7):

A few months into their relationship, Defendants decided that Mr. Rapaport did not fit with Barstool, and decided to declare war on him for the purpose of generating publicity and viewers to its site. Ultimately, as discussed below, this was a literal declaration of war admittedly designed to ruin his career by: (1) openly and for pre-textual reasons firing him in breach of contract; and (2) defaming him repeatedly by stating that he was a racist, had beaten his ex-girlfriend “black and blue,” was a “fraud” and has “herpes.”

As discussed herein, the claims of racism and being a fraud were designed to alienate Mr. Rapaport’s African-American fans by implying that he was not the person he portrayed himself to be (that they supposedly knew facts about him others did not), and the allegation of supposedly abusing his ex-girlfriend, a blatant lie as well, was designed to ruin his career as an actor in Hollywood. The actions of Defendants had the desired effect, as also discussed below: Mr. Rapaport’s podcast ratings went from 4.5 stars to 1.5 stars, and he was unable to attract sponsors for a new over the air un-walled show following Barstool.

“Rapaport is defamation-proof” and “Rapaport has acknowledged that there are publicly available photos of him in which it “looks like” he has “a herpe.” (from Barstool’s October counterclaim, page 15):

2. Defendants allege that Rapaport is defamation-proof because his reputation is so badly tarnished that it cannot be harmed any further.

3. With respect to the allegedly defamatory statements regarding herpes, as alleged below, Rapaport has acknowledged that there are publicly available photos of him in which it “looks like” he has “a herpe.” As a result, Rapaport cannot recover even nominal damages for his defamation claim.

4. More broadly, as alleged below, Rapaport has a bad reputation that is not capable of further tarnishment. Among other things, Defendants are informed and believe, and based thereon allege, that Rapaport has pled guilty to aggravated assault of his ex-girlfriend. Rapaport also has a long history of publicly making racist, sexist and otherwise offensive comments.

Rapaport cannot seriously dispute that this is his reputation: He refers to himself as the “King of Trash Talk” and promotes his podcast by stating that he is sharing “offensive” takes.

“This is a guy who, among many other things, publicly posted a photo of him anally raping Dave Portnoy” (from Barstool lawyer Aaron Moss to Gardner):

“Barstool doesn’t shy away from controversy, but Michael Rapaport’s problem was that he bit the hand that fed him,” responds Aaron Moss, Barstool’s lead litigation counsel in the Rapaport matter. “No company in its right mind would continue to employ talent that ridiculed its entire fan base by calling them losers, which is exactly what Rapaport did here. As for defamation, it’s incredibly ironic that Michael Rapaport, the self-proclaimed ‘king of trash talk,’ would file a lawsuit over a Twitter feud. While you would never know it from his motion, this is a guy who, among many other things, publicly posted a photo of him anally raping Dave Portnoy and who said of a then-19 year old Barstool personality that she ‘got [his] Pipe.’”

Moss doesn’t stop there, adding, “This is a guy who has been suspended from Twitter for his misogynistic remarks, who pled guilty for aggravated harassment of an ex-girlfriend, and who has been accused by African-American cultural publications as having a ‘hobby of castigating black women’ and of being the ‘worst kind of racist.’ Rapaport has publicly acknowledged that it looked like he had herpes in a widely-publicized photo over which he has been ridiculed for years before joining Barstool. As we’ve said from the beginning, this lawsuit is nothing but a schoolyard squabble that has no business being in federal court, and we look forward to bringing our own motion for summary judgment soon.”

“I do what I want. When I want. All the time. Those are the only fucking rules that there are at this company.” (from Rapaport’s latest motion, page 12):

According to Mr. Portnoy “killing the comment section” is part of what Barstool does. Mr. Portnoy himself refers to Stoolies as “morons,” “losers,” and “braindead idiots.” However, despite Barstool’s efforts to push controversy across its platform to generate views, the platform claims to have no rules governing employee conduct. According to Mr. Portnoy at Barstool “[t]here are no rules. […] I do what I want. When I want. All the time. Those are the only fucking rules that there are at this company.”

In light of Mr. Portnoy’s own attacks against Stoolies, the February Tweet cannot possibly be considered one of public disrepute, even accepting Barstool’s false narrative that it was an attack on all Stoolies. Even had Mr. Rapaport attacked Stoolies, Mr. Portnoy already told him in October 2017 that he would not be punished for engaging in this activity. This assurance was provided as part of a discussion where Mr. Rapaport’s co-host, as part of a feud with another Barstool host, called Stoolies “basement dwelling losers” on Twitter.

A citation of Oakley v. Dolan and “Defendants noted in their depositions that none of them would disavow their accusations of Mr. Rapaport having herpes, even if they were presented a medical record showing otherwise.” (from Rapaport’s latest motion, page 25, and yes, it is amazing that Charles Oakley’s eventually-denied lawsuit against Knicks’ owner James Dolan wound up cited here):

Most telling however is that not only did none of the Defendants conduct research about the validity of their statements before making them, but as to the issue of herpes, Defendants noted in their depositions that none of them would disavow their accusations of Mr. Rapaport having herpes, even if they were presented a medical record showing otherwise. This active promotion of Mr. Rapaport’s suffering and indifference to the accuracy of their statements is textbook malice.

D. Accusations of Herpes
Under New York law, loathsome diseases include “existing venereal disease[s]” and other “loathsome and communicable’ disease[s].’” Oakley v. Dolan, 2020 U.S. Dist. LEXIS 28267, at *33 (S.D.N.Y. Feb. 19, 2020). All Defendants made public statements of and concerning Mr. Rapaport accusing him of having herpes. Mr. Rapaport does not have herpes. Defendants also made their defamatory statements despite having no knowledge as to the truthfulness of their statements and conducting no research as to their accuracy.

There have already been 100 documents filed in this case, and it sounds like there may be many more to come. And while it’s a worthwhile lawsuit to keep an eye on for the outcome, it’s also worth watching this for the subject matter. It’s not every day we see a multi-year court fight that prominently features claims about an actor and podcast host having herpes.