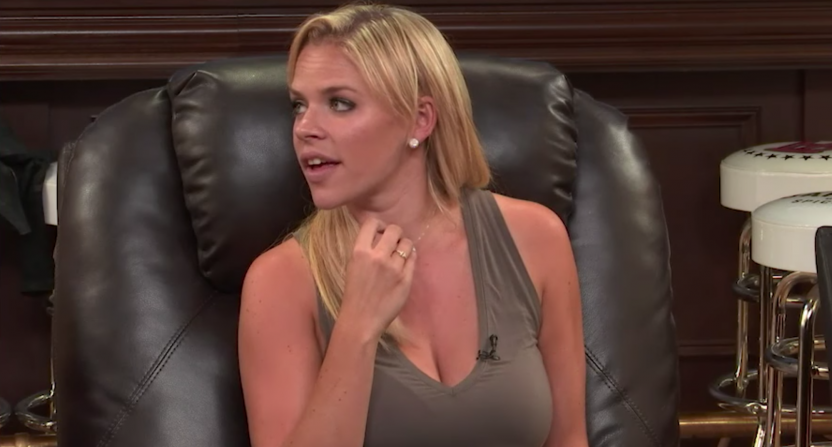 Julie Stewart-Binks announced this week that she is leaving Barstool Sports after only eight months, and there seem to be competing versions of how and why that is.

The way Stewart-Binks announced her departure Wednesday, it sounded as though she had decided to walk away.

I’ve really enjoyed my time working for Barstool Sports and Sirius XM. Thanks to Erika & Dave for an incredible experience and good luck to all the talented people I had the chance to work with. I have decided to take some time to decide my next career move.

But in discussing her exit on the SiriusXM show Barstool Breakfast, her former co-hosts Willie Colon and Francis Ellis suggested that Stewart-Binks had been “released.”

Colon: Today is a sad day. We heard news yesterday that our beloved JSB will not be working at Barstool anymore. She has left the company. I guess, was it safe to say she was released?

Ellis: Sure. I’m gonna stay away from this one.

Colon: She is no longer with us. There is a lot to it.

After the hosts praised Stewart-Binks and thanked her for helping their respective careers, Colon said this:

“Barstool is a unique animal. This is not ESPN, this is not Fox. This isn’t the traditional monster that you can tune in and say this is [unclear]. Barstool is authentic. It’s for the common man by the common man. This is the situation Barstool is in right now: People want to be a part of this juggernaut that has formed, but they don’t necessarily dive into what the core culture or the thread of Barstool what it is.”

Colon went on to explain that he butted heads with another Barstool personality when he first joined the company but that he had learned, “If you’re going to get into it, there’s no crying, there’s no regret. You either put your gloves on and your mouthpiece in and you get to swinging, or you get out the gym.”

Ellis then said that working at Barstool was “a real sink-or-swim kind of thing” and that, “The momma birds are pushing the baby birds out of the nest and saying you better learn how to fucking fly or you’re going to hit the ground and you’re gonna die.”

Colon and Ellis continued explaining the culture at Barstool, seeming to imply that Stewart-Binks struggled to adapt. They ended the conversation by praising Stewart-Binks’ talent and wishing her luck in the future.

But whereas Colon and Ellis seemed to suggest Stewart-Binks was canned, Barstool founder Dave Portnoy had a different take. Portnoy, does not typically play coy when a high-profile employee leaves (see Michael Rapoport), told Ryan Glasspiegel of The Big Lead that it was “great working with” Stewart-Binks and that “it was mutual that she would pursue new opportunities.”

Stewart-Binks did not immediately respond to request for comment Thursday.