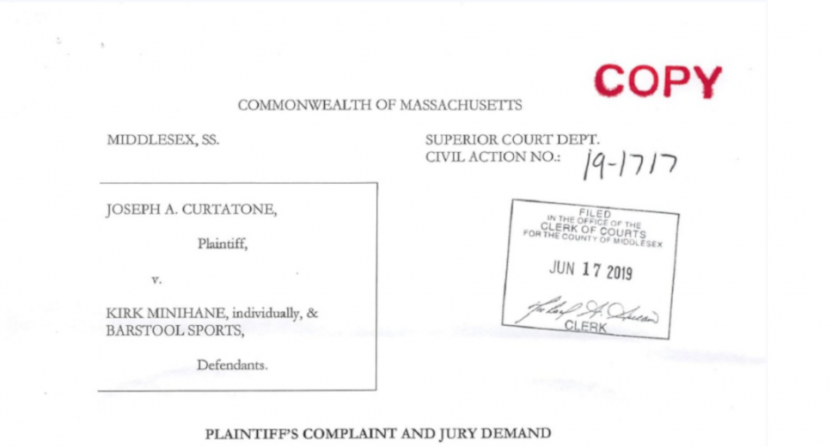 Barstool Sports has faced plenty of controversy over the years, from offensive comments from site personalities to the behavior of their Twitter followers to the 2017 cancellation of their ESPN2 show Barstool Van Talk to their assorted feuds with the NFL. Now, they’re being sued by a Massachusetts mayor. That would be Joseph Curtatone, the eighth-term mayor of Somerville, MA (directly northwest of Boston, with an estimated population of around 82,000). Curtatone announced on Twitter Monday that he’s suing Barstool and new Barstool personality Kirk Minihane over an interview Minihane conducted with Curtatone (while posing as “Kevin Cullen of The Boston Globe“, interesting considering that Minihane was responsible for Cullen’s 2018 suspension for fabrication), that was posted on Barstool’s website:https://twitter.com/JoeCurtatone/status/1140663597162516481The lawsuit can be seen at that link Curtatone tweeted. But there’s a lot of background here. Curtatone’s war with Barstool began May 31 when he criticized the company’s partnership with the Boston Bruins to distribute towels at a Stanley Cup Final game, building off a May 30 Boston Herald column that said the Bruins shouldn’t partner with Barstool:https://twitter.com/JoeCurtatone/status/1134564824816504837That then led to Barstool founder Dave Portnoy writing a “The Mayor Of Somerville Joe Curtatone Who Appears To Be A Legitimate Criminal Took A Shot At Barstool Sports Over Towelgate” piece. Some selected highlights from that:

So I’m trying my best to just ignore all the idiots who keep criticizing Barstool Sports, but I couldn’t ignore this one. The Mayor of Somerville coming from the clouds to pile on. Saying we use the word “sports” to disguise misogyny, racism & general right wing lunacy. Umm buddy what the fuck are you talking about? Well since politicians are basically professional public speakers I figured I’d offer the same challenge to Joe as I do to every single person who makes shit up about us. I offered to publically debate him on all his issues regarding Barstool Sports.What I didn’t know at the time is that Joe Curtatone appears to be a professional criminal. Like a real life mob boss. Oh you don’t believe me? Look at these headlines….

https://twitter.com/stoolpresidente/status/1134614250100596736https://twitter.com/stoolpresidente/status/1134614682050990081Curtatone then shot back:https://twitter.com/JoeCurtatone/status/1134623618296668161And he later appeared on a Boston Herald Radio segment (a streaming radio station run by the Herald) to talk about his issues with Barstool:https://twitter.com/JoeCurtatone/status/1136328259564658689That led to Minihane’s piece, which was posted June 6, and included “Now, like most craven politicians, Curtatone refused an interview with Kirk Minihane. He’d rather talk with spaghetti spine stenographers who will simply regurgitate his PC pablum. But when Minihane called and said he was from The Boston Globe… they dropped everything and scheduled an interview. Right on time, the good mayor called “Kevin Cullen” from the Boston Globe and gave us a 20 minute interview. You’ll notice that despite Miniha- I mean Kevin Cullen’s dogged questioning, Curtatone never once identifies a specific complaint against Barstool.” That’s what Curtatone’s lawsuit is about. However, in a bunch of tweets responding to that, Portnoy said the interview came at a point when Minihane wasn’t working for Barstool (he was announced as officially joining them May 30; he’d previously been a co-host on their Super Bowl radio shows this year, though)https://twitter.com/stoolpresidente/status/1140665800921145346https://twitter.com/stoolpresidente/status/1140670110690172928Update: Minihane responded on air Monday afternoon, and threatened a countersuit:https://twitter.com/BarstoolRadio/status/1140738530332872710Our original post continues below:Curtatone’s claim is worth reading in its entirety, and there are a couple of notable things about it. For one, despite the complaint’s mentions of what Portnoy and Minihane said about Curtatone, this is not a case of libel (written defamation) or slander (spoken defamation). Curtatone would face a tough battle there, considering that his job as mayor makes him a public official, which would require the difficult-to-reach actual malice standard for libel.

This is a more specific claim that’s particular to the Massachusetts Wiretapping Statute, which Curtatone’s complaint says “makes it a criminal violation to record an individual without his or her consent” and “also imposes civil penalties for violations of the Statute and affords aggrieved individuals a civil cause of action.” Curtatone’s filing also alleges that “the ‘consent’ that Minihane obtained from Curtatone to the recording was obtained through fraud because Minihane impersonated a Boston Globe reporter.”This is not the first lawsuit against Barstool. Brief Barstool personality Michael Rapaport sued them for defamation and breach of contract in September, including complaints about their comments claiming he has herpes. Barstool countersued in November, and their countersuit included claims that Rapaport had previously joked about sores that made him look like he has herpes. That battle appears to still be going on.As per the Curtatone lawsuit, it’s far from clear how that will play out. This claim specifically being about wiretapping is interesting, as that means that the usual libel discussions aren’t in play. And it’s notable that some recent lawsuit successes against media organizations, such as Hulk Hogan’s 2016 win against Gawker, haven’t come from libel suits, but from other claims (in that case, invasion of privacy). And while someone tweeted at Portnoy that there’s a May ruling suggesting “people generally have the right to secretly record cops and other public employees and officials in public places,” that may not apply given that the Minihane recording wasn’t in a public place.It’s also unclear if Portnoy’s claim that this was done before Minihane worked for Barstool matters; in a libel or slander case, Barstool would still have some responsibility as the publisher of the content, but it’s not clear how that relates to the wiretapping statute. But there still may be some difficult hurdles for Curtatone to clear here, especially considering that he appears to have consented to the recording when he thought it was a different interviewer. And previous lawsuits (real or threatened) involving interviews obtained under false pretenses often haven’t gone well, including several involving Sacha Baron Cohen. However, Baron Cohen had the defense of getting people to sign releases, which doesn’t appear to be the case with Minihane, and many of the discussions of legal action there were about defamation, not illegal recording.At any rate, it’s certainly notable that a Massachusetts mayor is suing Barstool. And that seems to suggest we’ll see plenty of further back-and-forth between Barstool, its fans, and Curtatone. This one will be worth keeping an eye on.[Joseph Curtatone’s claim on Scribd]