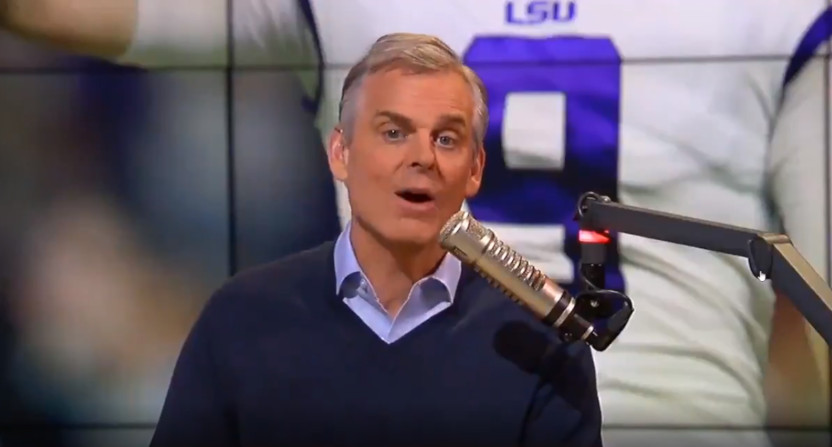 This past Wednesday, Fox Sports Radio and FS1 host Colin Cowherd posted a somewhat cryptic tweet that had the intended effect it was going for.

My life bout to get more interesting. ?

Naturally, that got the rumor mill churning and it moved into hyperdrive quickly when Cowherd followed up that tweet with congrats to Barstool Sports CEO Erika Nardini on the company’s valuation earlier in 2020.

And so, the natural question to ask at that point was…is Cowherd getting ready to announce that he’s moving from Fox to Barstool?

Let’s dig into what we know (and think we know).

Lots of rumors about me today on the Internet. I will simply say this — I will have a major announcement very early next week. Thanks for all your support.

One, the one specific thing we can probably presume is that Cowherd appears to be gearing up for a move back to Las Vegas (He currently lives in LA). On Friday, Cowherd implied pretty heavily that Vegas is calling his home.

Ever feel like a city is calling you? pic.twitter.com/ixO58uophm

The sports personality began his broadcasting career as the play-by-play voice of the Las Vegas Stars, a AAA baseball club. He parlayed that into a role as the sports director at KVBC, where he was named Nevada’s Sportscaster of the Year five times before moving on to other markets and eventually joining ESPN.

Outkick’s Bobby Burack also reported that, per sources, Cowherd was currently looking at property in Las Vegas for both a new home and studio space.

So what does all of this have to do with Barstool? Well, let’s start with Burack noting that “the move relates to the increasingly lucrative opportunities in the sports gambling industry.” Cowherd purchased a bit of stock in Penn National Gaming back in April and, per a conversation between him and Outkick’s Clay Travis, he was thinking long-term about its potential.

Bought a ton of Penn Gaming last week. At 13 a share. Will be bumpy ride— will go down if NBA season is cancelled. But will pop when sports returns.

And at this point, we remind you that Penn National purchased a minority share in Barstool back in January. So when Cowherd congratulated Nardini in his tweet, it might have very well simply been a satisfied stockholder saying thanks to the CEO who upped the value of his portfolio (ethical conflicts be damned!). Though, the fact that he was tweeting out an article from almost a year ago seems curious.

But could there be more to all of this? It’s worth noting that Cowherd re-signed with Fox and iHeart in 2018 with a new deal that gives him a salary as well as a share of the net revenues from his radio program. The deal was for four years and presumably runs through 2022. But, given that Cowherd does have an ownership stake in his radio program, and has made other investments outside of Fox, it is possible that the tease could be about some kind of Barstool partnership, even if it’s not about Colin jumping ship altogether.

Clearly, Cowherd has a financial stake in the success of Barstool, and his radio program presumably aligns with their audience, so it wouldn’t be too surprising to find out there’s some kind of connection coming between the two. It’s also worth noting that Barstool has branded sportsbooks in certain Penn National properties, including the Tropicana in Las Vegas and the M Resort in Henderson, Nevada.

But perhaps the answer is just more simple than all of this. Cowherd is moving to Las Vegas, which in and of itself is a big announcement. He’s interested in sports gambling and there are plenty of opportunities for him to get involved with that once there. Also, he’s an investor in a gaming company that also has an interest in Barstool Sports, so while he might not be working directly with Barstool, his vested interest is why he’s promoting them.

Or maybe the truth is somewhere in between. We will apparently find out early this week, per Cowherd himself.