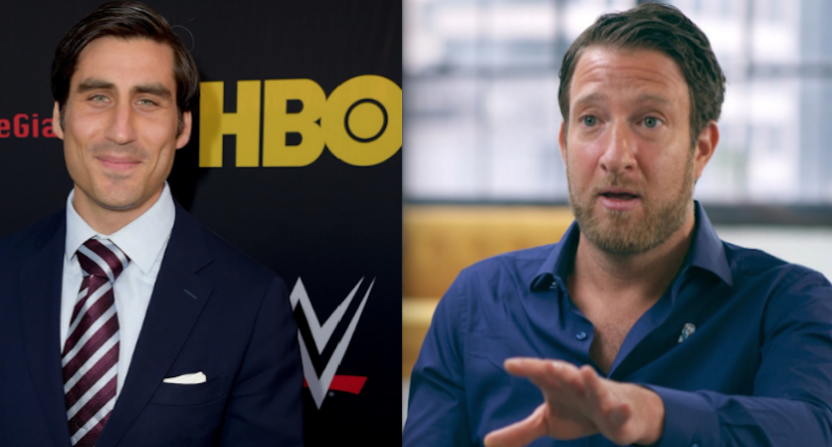 Sports media feuds are nothing new for Barstool Sports and their founder and President, Dave Portnoy, who historically has reveled partaking in any dustup with any individual that chafes him. Portnoy’s newest target is HBO Sports Executive Vice President, Peter Nelson, and the backstory for this one is, as always, a doozie.

HBO’s Real Sports did an unflattering segment on Barstool Sports last June, in which Portnoy was featured heavily (you can read my review here, and my thoughts on Barstool’s willingness to participate here). What was whispered about at the time was that Nelson was seeing/dating popular Barstool personality, Sofia Franklyn, who is half of the hosting duo of the very popular Call Her Daddy podcast.

It wasn’t clear at the time how serious the relationship was (the pair had been spotted a few times at events), if Nelson had any substantive role in the segment, and also if Nelson’s potential influence would have aimed to soften or sharpen the criticism directed at Barstool (the popular conjecture was that if Nelson did assert some influence, it would be to soften criticism toward Barstool. It now dawns on me that this is the closest thing we’ll have to a sports media version of Billions). Fast-forward to now, and the relationship between Franklyn and Nelson — and a possible conflict of interest — is coming under more heavy scrutiny, following comments made by Portnoy during a 30-minute explanation outlining his version of events that has led to an ongoing five-week hiatus of Franklyn’s Call Her Daddy.

A simplified version of a complicated situation would be that Franklyn and her co-host, Alexandra Cooper, are embroiled in an extremely contentious contract renegotiation, the aim of which includes more money (duh), to regain the Call Her Daddy brand which Barstool acquired the rights to, and potentially their exit from Barstool altogether. Over the weekend, the curtain was pulled back on the contentious negotiations, when the New York Post ran a story that the pair were now at odds with each other over how to break their current stalemate with Barstool. The New York Post additionally reported that Nelson (Franklyn’s boyfriend) was the one actively managing the potential exodus from Barstool.

The insider said the feud has been stirred up by Franklyn’s boyfriend, HBO Sports executive vice president Peter Nelson, 38, claiming that he has been advising them behind the scenes.

They were offered a deal with podcast network Wondery, the insider said, which was orchestrated by Nelson: “He was quietly shopping them even though they were still under contract with Barstool.”

With the New York Post article circulating, Portnoy released his version, which threw additional accusations about Nelson’s role in the rift as well as the Real Sports segment.

“I was starting to hear whispers and Alex confirmed it, and this is is a big part of the story. Sofia’s new boyfriend, which I guess Call Her Daddy people call “suit,” I call him fucking a bad guy from a James Bond movie who thinks he’s way smarter than he is……Peter Nelson, is that his name? HBO exec. Probably greenlit a hit piece on me not too long ago. But he had come into the mix. He was the one who brought in all these lawyers. The lawyer was his friend, I believe. This is what I believe, and he was openly shopping Call Her Daddy. He was acting almost as a manager, and he got a deal with Wondery. They were going to call the podcast “The Fathers.”

Portnoy would go on to say that Nelson had also gotten a copy of a Barstool employment contract through a friend that is an agent, and was helping to craft a legal strategy for the two to get out of their existing deal. Per Portnoy’s retelling, Cooper seemed to lose the stomach for the legal battle that was going to play out, and preferred to continue with Barstool under a new deal Portnoy was offering. He says the new deal included more money, the return of Call Her Daddy IP, and shortening the time left on the existing deal. Portnoy’s retelling says that the falling out revolved around Cooper’s preference to stay at Barstool versus Franklin’s preference to continue towards a messy legal divorce from Barstool, that again, Portnoy believes was partially influenced by Nelson.

While this is all complicated and interesting given that we rarely see talent deals unravel in such spectacular public fashion, the accusation that was potentially most damning was that Nelson’s relationship may have been the impetus for HBO’s Real Sports segment on Barstool.

When reached for comment, a representative at HBO Sports provided the following explanation to us:

The acceptance of that statement probably will have a heavy correlation to your opinion on Barstool and Portnoy himself. For what it’s worth, a source familiar with production of Real Sports told me that Nelson’s involvement with Real Sports was minimal, and he was focused on larger opportunities for HBO. The source went on to say that story ideas were almost universally generated by producers and correspondents, but that it might have been wise to add an editorial note about Nelson’s relationship when the piece initially ran.

What’s interesting from an industry perspective is that this very public blowup boils down to what’s been a growing contentious issue between content brands and content creators. Ownership of podcast brands has become a significantly bigger issue in recent years, and has been at the forefront of recent union organizing efforts and contract negotiations.  You’ve often seen talent slide around from network to network, often not bringing the brand they built up with them, and those brands and built-up followings instead staying with the company that played an assisting role in growing that brand.

Name a faster team than @barstoolsports.

Ultimately, both Franklyn and Cooper realized their efforts to build up Call Me Daddy without ownership of that brand was going to be problematic long-term. What’s unclear is if the pair will repair their diverging thoughts on remedying the situation, and if either will return to Barstool.

While Nelson’s potential involvement is now getting the bulk of the well-known Stoolie outrage, it’s unclear how much, if any, that fury is warranted. Regardless, Portnoy commands a pretty loyal army of followers that makes life uncomfortable to whomever is in his crosshairs (we’ve been there, and it’s very unpleasant!). Portnoy’s 30-minute account of the situation was a tactical decision to put pressure on Franklyn, Nelson, and others. With outcomes from contentious litigation to an amicable extension in play, this is again another example of how following Barstool provides its own crazy soap opera beyond their own content, which at this point is intended to be part of the unique experience of Barstool.