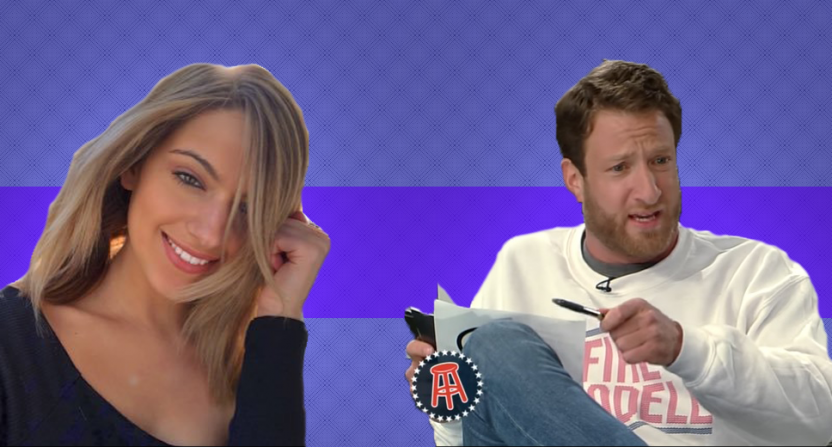 Here is what we have got here in a nutshell:

Barstool Sports founder Dave Portnoy once again waded into controversy on yesterday’s edition of Barstool Radio when Ria Ciuffo, host of Barstool’s Chicks in The Office, called him out on the air for comments made about her appearance. Specifically, Portnoy said “she’s not going to be able to put her face in front of a camera in five years, because people will throw up.”

Ciuffo, who is not yet of legal drinking age and is seen below tweeting about the incident, walked away from the encounter after Portnoy effectively and angrily doubled down on his comments.

I’m on the road to becoming Milton tough.

Posting this now since I might not look as good in 5 years @stoolpresidente pic.twitter.com/BGlnAn7jHt

From there, things played out as you would imagine – although with a slight twist. Deadspin, who has been the most vigilant (and as some may argue, overly vigilant in documenting Barstool’s penchant for cringeworthy behaviors) critic of the company, did cover the incident given that, well, this was a pretty terrible look.

The twist, though, is that Barstool didn’t wait for Deadspin’s coverage before firing back a retort, which typically incites their tribal following into harassing the particular writer who penned the critical piece (usually, Deadspin’s Laura Wagner).  Instead, Barstool opted to go on the offensive early by writing this mock Deadspin article, attributed to Laura Wagner and screenshotted below. 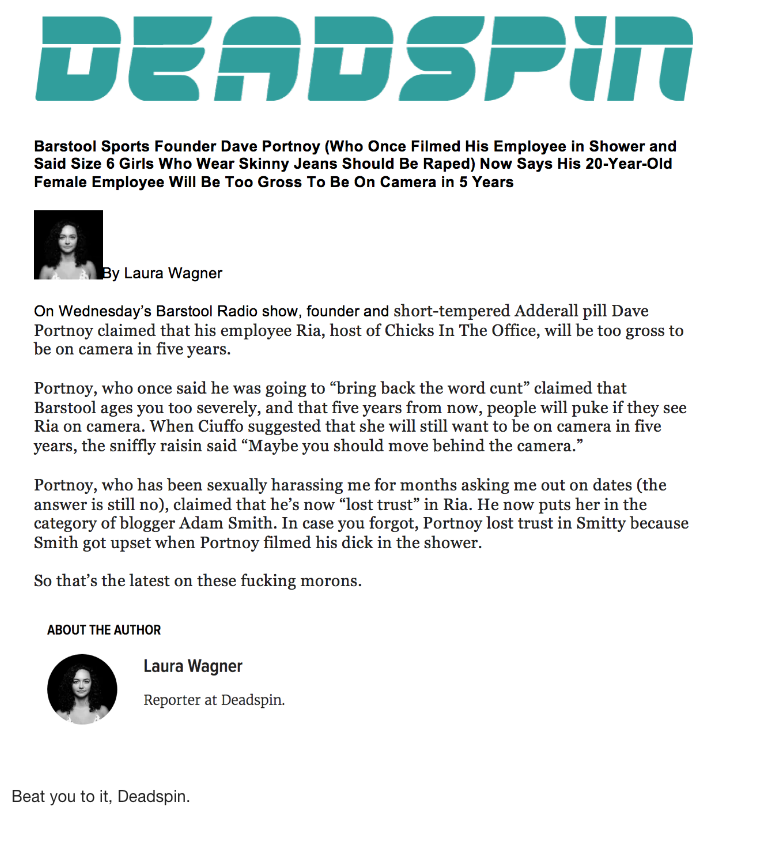 Would this preemptive strike deter Deadspin from covering another installment of “holy shit, what did Barstool do now?”

No. Deadspin did indeed cover the incident although Wagner didn’t end up penning the article. This feels like the tenth installment of these two sites clashing over the past year, all of which typically follows the same cycle of “Barstool did something terrible again” followed by “go fuck yourselves Deadspin, we’re bigger than you, haven’t gone bankrupt, and our followers will make your lives hell,” which then in turn leads to other outlets (including us, in fairness) attempting to shine a light on these events while hoping to avoid the tribal zealousness of feedback often provided by the Barstool audience.

“Look how shitty these guys are?”

“Fuck you, you failing PC losers”

“It was a joke and a bad one. People who know us, know we’re not REALLY serious.”

And then, if we don’t cover the issue…

“Awful Announcing isn’t covering because they don’t have a backbone anymore.”

And if we do cover the issue…

“These guys just want to get pageviews covering Barstool. They even tweeted the article later and the next day” (we do this for all articles, multiple times).

Personally, I think Portnoy’s comments were really shitty. There is no way to ignore that. There is also no way to ignore the fact the he gives no fucks and doesn’t take kindly to those around him trying to steer him towards an apology. He’s like your friend who is too drunk, and when you try to get him a glass of water at the bar, he gets mad and comes back with a shot and a beer just to show you that you will NEVER CONTROL ME AND FUCK YOU FOR THINKING YOU CAN.

This is more or less the Barstool cycle that plays out once or twice a month. Portnoy is entrenched in it, feeds off of it, and does a masterful job pushing everyone’s buttons. The Barstool audience eats up these dustups each and every time, and the call to arms to defend the brand is a part of their lives. The actual situations or issues don’t really matter as long as Barstool is framed as the fun and non-PC side of any argument. Erika Nardini, the company’s CEO, either avoids tough questions as the company’s most palatable executive, or does a graceful job dancing around them in the rare scenario she’s asked about the incidents.

Basically, Barstool isn’t going to change. Some thought it would as it grew and became more mainstream. It’s not happening, nor is it ever going to happen. On the flip side, the reactionary outrage is also not going to go away either. So more or less, pick a side, get some popcorn, and watch this riveting stalemate – or just try and tune the whole thing out.

RC: “He said that I’m going to look so gross in five years, that people are going to puke on camera? I didn’t know you said that about me before!”
DP: “There’s a chance I said that.”
RC: “That’s horrible. That’s really horrible.”
DP: “I’m talking about… I can’t get double teamed right now.”
RC: “But you can, because that’s so horrible.”
DP: “I’m just saying you’re going to age Ria cause you’re in Barstool world like your boyfriend Hank [Lockwood].
RC: “But in five years, people will puke when they see me?”
DP: “Well, that’s aggressive.”
RC: “That’s really aggressive for someone who…”
DP: “I will not apologize. “There is no apology coming for that.”
RC: “For saying people are going to puke?”
DP: “It’s the same, I said the same thing about you and Hank.”
RC: “It’s messed up to say about Hank too.”
DP: “Exactly.”
LG: “But Hank is a guy you know it’s different.”
KC: “That’s where Dave says the MeToo movement… [talking between three people]”
RC: “Nobody’s saying George Clooney’s out there looking gross. Well maybe older men should not be called gross and you should not say we’re going to age poorly and gross.”
DP: “Well, then you’re in the wrong place.
RC: “Hm.. I don’t think I’m in the wrong place. I’ve been here for two years. But you said in five years I’m going to look so gross on camera…”
DP: “Yeah you and Hank together. I didn’t say Hank looked great and you look bad. I said you both look gross.”
KC: “Dave’s been pushed to a corner right now, he’s frazzled. He just lost a huge game to Liz.”
DP: “I’m not frazzled. I’m frazzled to Liz, I’m not frazzled by this.”
KC: “And now you’re doing this to get your hands…”
DP: “I don’t give a fuck. HEY, you wanna hear it again? Ria and Frank, uh, and Hank, are going to grow old and gross together. Done.”
KC: “That is a lot different. That’s not how you articulated it last time.”
DP: “It’s the same thing.”
[multiple people saying it’s not]
DP: “I’m talking the same thing. It’s Ria and Hank living in a Bizarro world universe.”
RC: That’s so different than saying in five years people won’t even want to look at me on camera,”
DP: But it’s not different in the scheme of talking for your sister, who got engaged at 27.
RC: “When we’re talking about jobs, and I work on camera and you’re saying in five years I won’t even be able to have a job… I want to be working here in five years. I want to be on camera. I want to stay here.”
DP: “Well maybe you’ll have to go behind the camera.”
KC: You’re such a dick.
LG: “He doesn’t mean that.”
KC: “He’s just being a dick on purpose. Look at that stupid face”
DP: “Welcome to Barstool Radio, Ria.”
LG: “He’s just being a dick because he lost an argument to me, that’s why you’re being mean to Ria.”
DP: “I did lose an argument.”
KC: “Just apologize.”
DP: “Get out of here.”
KC: “You need to know, I could have told you that was about to happen.
DP: “It’s obviously a fucking joke, if she can’t take a fucking joke than don’t walk in here.”
KC: “Clearly, she wasn’t taking it as a joke. You’ve got to be able to read that situation.”
DP: “Then she shouldn’t fucking come in.”
LG: “Well, she thought you were going to apologize.”
DP: “Well, than she doesn’t know me Liz.”
KC: “Well, that’s true. Expecting an apology from Dave ever is so silly.”
DP: To walk into the radio when I’m on the radio and be like a puke thing, that’s such an obvious overexaggeration and you’re going to cry? Get the fuck out of my face with that.”
LG: “I think it took her by surprise…”
DP: “It’s the whole thing with the engagement and Hank… Honestly, if you’re gonna cry, then walk your fucking ass out the door. I don’t give a fuck about that, and I’ll double down on that. You want to stare at me, Liz? I don’t give a fuck. That’s how we built this company.”
LG: “I know that.”
DP: “So you want guys and girls to be treated the same? They are. I’m talking about the same fucking thing”