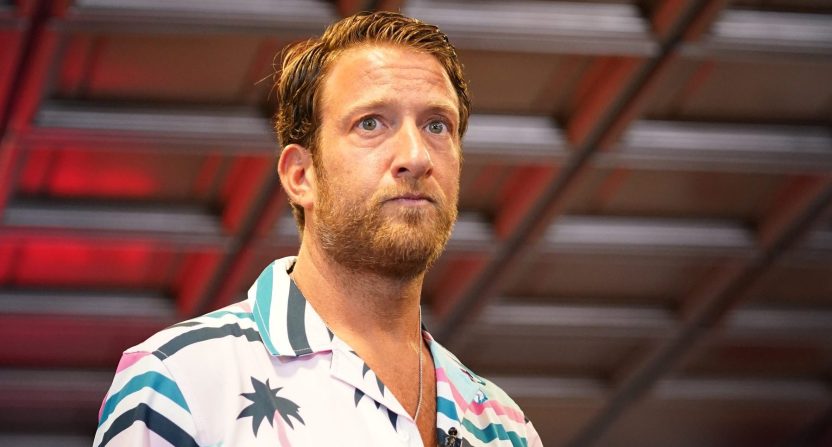 Last November, Insider ran a report from Julia Black in which several anonymous women accused Barstool Sports founder Dave Portnoy of sexual misconduct, including choking and filming them without consent. In February, Insider posted a follow-up report from Black and Melkorka Licea, which included interviews with three more women who accuse Portnoy of claims that include filming sexual encounters without consent, sending them videos of him having sex, and breaking one woman’s rib during a sexual encounter.

This past weekend, the New York Times ran a story about Portnoy and his growing role as a sports-betting industry spokesman on behalf of Penn Entertainment, formerly Penn National Gaming, which is about to take over Barstool, as well as Barstool Sportsbook, which is currently seeking licenses to operate in multiple states. Reporter Emily Steel, who earned the 2018 Pulitzer Prize for Public Service, spoke with gambling industry watchdogs and regulators, many of whom have voiced concerns or signaled discomfort with licensing Portnoy given the aforementioned allegations, to say nothing of the many other unsavory things he has said over the years. Some people she spoke with also voiced concerns about the messaging that Portnoy uses in his gambling marketing, which “often come off as irresponsible,” per Keith Whyte, executive director of the National Council on Problem Gambling.

According to The New York Times, members of the Massachusetts gambling commission shared concerns at a public meeting about Portnoy following the Insider reports. Meanwhile, the Nevada Gaming Contro Board said in a statement that “it is investigating Penn’s compliance with gambling regulations, including its due diligence into Barstool and Mr. Portnoy before their 2020 partnership.” While the board may decide to do nothing, they could also force Penn to sever ties with Portnoy before approving their license.

According to the Times, they provided Penn, Barstool, and Portnoy with questions before printing the article. The only on-record response they received was from Portnoy.

“You have so many factual inaccuracies it’s actually laughable,” Portnoy responded. “It’s below me to even dignify this hatchet job with a response.”

Portnoy did dignify it with a response on Monday when he appeared on Fox News’s Tucker Carlson Tonight, saying that he had, in fact, offered to do a face-to-face interview with Steel seven months ago.

“When I heard about [Steel’s story in April], I said, ‘Let’s sit down — open-book. I will answer any question you have,’” Portnoy told Carlson. “‘I don’t care what your politics are, how you sit — I am the witness of a story you are working on for basically a year and I am saying: “I will sit down with you. You can ask me anything.” I’m not saying, “Lawyers in the room.” Nobody, just me.’”

Portnoy also told Carlson that Steel sent him a list of questions 48 hours before the story was published.

“We want all these answers to all these allegations in 48 hours,” Portnoy said, accusing the Times of “trying to make the case that I’m a scumbag and sway people.”

“[Steel] never had interest in telling the truth,” Portnoy said. “All she wanted to do was build a case against me.”

The New York Post reached out to the Times to confirm Portnoy’s side of the story but, according to them, it was Portnoy who refused to provide answers after the newspaper declined his request to videotape the interview.

“More than a week before the article published, we presented Mr. Portnoy with an opportunity to answer detailed questions related to our reporting, which was thorough and fact-based,” a Times spokesperson told The Post. “Despite our offer, he declined to provide any answers, and has yet to challenge any facts in our reporting.”

Sunday, Portnoy also shared a series of direct messages between him and Steel in which the two attempted to figure out the logistics surrounding a potential interview. The messages Portnoy shared show that he reached out to Steel on May 10 with knowledge of her reporting and said that he would like to sit down for an “on-the-record conversation.”

This is a direct quote:

“The Times provided Mr. Portnoy with detailed questions about this article. Barstool executives did not respond to repeated messages. Mr. Portnoy did not provide answers.”

Steel responded by saying that the Times would love to do an interview with him and that they would be in touch soon. Portnoy added that he wanted to record the interview and be able to share it himself. Steel got back to Portnoy on May 23 to let him know they were still reporting and not ready to interview him but he could provide a comment in the meantime. Portnoy responded by saying that Steel didn’t seem eager to speak with him since two weeks had passed and asked to speak with his editor, whose contact information she provided.

The DM conversation doesn’t pick up again until a day noted as “Today” when Steel is asking Portnoy to respond via email to her questions. Portnoy provides the aforementioned quote used in the article and accuses Steel of refusing to accept his initial interview offer. Steel responds with a request to discuss the email questions via phone call but Portnoy says he wants to do an in-person interview in which they can both ask questions. Steel agrees to meet in person and to record audio but not video, to which Portnoy says “audio and video or nothing” and that the interview must take place in Miami. Steel says that the Times does not accept those terms and Portnoy shares his disdain for how the process plays out.

The New York Times Communications Twitter account got involved on Monday, quote-tweeting Portnoy’s video with their version of events.

“Over a week before this story published, we presented Mr. Portnoy opportunity to answer detailed questions related to our thorough, fact-based reporting,” said the Twitter account. “Although he declined to provide any answers, we included his sentiment in the story itself, despite claims to the contrary.”

The exchange he displays here was captured on Nov. 15 and does not include other, repeated efforts to engage with Mr. Portnoy or our offer to allow him more time to respond, which he ignored.

The account then followed that up with an additional tweet to say that Portnoy’s video did not offer the full breadth of the conversation and the overtures made to get his side of the story.

“The exchange he displays here was captured on Nov. 15 and does not include other, repeated efforts to engage with Mr. Portnoy or our offer to allow him more time to respond, which he ignored,” said the statement.

Steel also shared an image from the direct message conversation between her and Portnoy that was left out of the video in which she offers to extend the deadline for Portnoy to respond.

“I emailed Dave Portnoy a detailed list of questions about my article more than a week before it ran,” Steel tweeted. “I made multiple attempts to hear his perspective. He posted an edited video about my reporting.”

And here was the end of the exchange with Portnoy, which he did not include in his video: pic.twitter.com/xyajqBKeim

And so here we are. Again. The cycle has played out pretty much just like with the previous reports about him and Barstool, with Portnoy expending a lot of energy to discredit the reporting and cast doubt on those behind the story, while they and their organization stand firmly behind their reporting.