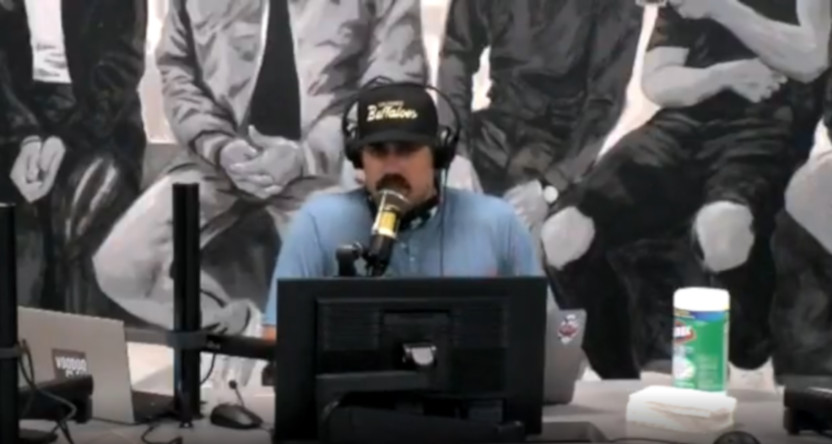 On Thursday, following ESPN’s pre-game MLB show featuring President Donald Trump, Trump did an interview in the White House’s Rose Garden with Barstool Sports founder Dave Portnoy. On Friday, before Portnoy had even officially put that 20-minute interview out on his Twitter account, Barstool’s Dan “Big Cat” Katz complained on his own Barstool Radio show (on Sirius XM) about Portnoy doing that interview. Katz expressed concerns about that interview taking Barstool into politics (saying they hadn’t been there before, something that’s certainly debatable when you consider Portnoy’s repeated Fox News appearances and past tweets lamenting COVID-19 closures that got retweeted by Trump), but also talked about how disappointed he was that he wasn’t consulted in advance of Portnoy doing that interview. Here’s the 10-minute segment Katz spent on this Friday:

.@BarstoolBigCat weighs in on Dave's sit down with President Trump pic.twitter.com/SBkCjOYDKh

Here’s a full transcription of that:

“I watched the video, I watched it twice this morning. There were no hard questions, there were no, you know, follow-ups. You have to have that ready to go. You can’t let it become, um, a political act. And the other part of it is, I don’t think it’s a coincidence that the president’s office reached out to Barstool four months before an election when he’s polling at his worst. Again, I don’t want to talk about politics, but I’m forced to right now. Because this is what now Barstool has become. And I’m going to get to all that in a second, cause that’s the bigger point, but I don’t think it’s a coincidence that we were offered this at this specific point in time. And that bothers me because it feels like we’re being used in a political race.”

“But the bigger issue, and the part that is really killing me to my core this morning, is that I wasn’t made aware whatsoever that this was happening. I found out via Twitter and via text message just like everyone else. And you may say to yourself ‘That’s not a big deal,’ but I’ll give you a little backstory of why it hurts, and why for the first time ever, I’m saying to myself, ‘What am I doing? Like, what am I doing?'”

“Cause in December 2019, I sat down with Dave, Erika [Barstool Sports CEO Erika Nardini], and Jay Snowden, Penn CEO [Snowden actually became CEO of Penn National Gaming in January 2020, and they officially acquired a minority stake in Barstool shortly after that]. And the deal was getting decided and we were putting everything together, and all three of them looked me in my eye and said ‘You are a key part of this.’ It’s actually written down, it’s not like ‘Oh, we think you’re important,’ it’s written down that you are a key part of this deal, this deal doesn’t happen without you, Dan. They looked me in the eye and said ‘You are a partner in this, you are a partner in what we’re building.'”

“So flash forward to yesterday, and I find out on Twitter and I text Erika, I text Dave, I text everyone ‘What’s going on?’ I have no idea. I then talk to them. Dave found out that he had the opportunity to interview the president on Wednesday. He talked to Erika, he talked to [majority owner] Chernin Group, he talked to Jay. He didn’t talk to me. He blatantly said ‘I do not care what Dan thinks about this.'”

“And I might not have been…if we had sat down and talked about this, I might have landed on ‘You know what, you’ve got to go do the interview.’ But I never had that opportunity. And it leaves me in a spot now where I’ve got to ask ‘Does Dave Portnoy care about what I think? Does Erika Nardini care about what I think? Does Jay Snowden care about what I think? Am I a partner in this or not? Am I building something with them or not?’ Because it seems like this is a big decision. Again, you get offered something like this, it’s very hard to turn it down, I understand that, but it’s a big decision to make that push over the line of ‘We are now in the political.'”

“Because you can’t pretend now! You can’t pretend ‘We don’t do politics.’ When you interview the president in an election year, four months before the election, you can’t say ‘We don’t do politics and we stay straight down the middle.’ It’s impossible. That ship sails. And if that’s what we want to do, that’s okay, but I need to know. Because I thought I was a partner, and I thought my opinion mattered, and I thought where I came, my thought process mattered in this decision-making and where we want to go as a company. And clearly it doesn’t.”

“And I’ll go back to it again; being offered an interview with the president in the Rose Garden is something that’s very rare, and you can’t just say ‘Oh no, we’re not doing it.’ You have to think about it, you have to understand why we’re being offered it, are we being used, is our platform being used for political gain? What is the motive behind it? Are we going to have an interview that’s hard-hitting and follow-up questions, or is it simply going to be a softball interview that’s used to make someone likeable?”

“Like, politics are serious, man! You can’t do a political interview and not be serious. It’s a serious fucking game and that’s why I don’t talk about it. I don’t have the intelligence, I don’t have the ability to navigate these waters. And once you get in them, you can’t pretend that you’re not in them. And the fact that I wasn’t asked or even given a heads-up, the fact that this company that I love so, so much and I’ve given so, so much for, and I love so, so many people here, and what we do, and how we change lives, and how we make people laugh, my opinion doesn’t matter! And it sucks, cause it’s a really tough realization.”

“So I’m in a spot now where I really don’t know what to do. For the first time in my career at Barstool, I really don’t know what to do. Because I’ve been told that I’m an equal partner in all these things and I’m not. And it leaves me with the feeling that Erika and Dave and Jay, they do not care what I think. And they can tell me they care, but their actions spoke to it, they don’t really care what I think. And if they did, they would have at least given me a heads-up, they at least would have told me so I don’t have to find out when everyone else finds out. And that’s where I’m at.”

“So, um, yeah. So let’s take a break. We’re going to take a two-minute break, and then we’ll come back, and try and do something different and get back to the regular show. But that’s something I had to say, that’s something I had to get off my chest. And, um, yeah. It sucks, man. It’s the first time. I love this company so goddamn much, and it’s the first time that I’ve kind of just been at a loss. Because we’ve made that transition to the political world that I thought we weren’t going to do, and I wasn’t even tipped off. Not once.”

“And it hurts, man, it fucking hurts. It feels like something that I didn’t expect, because Dave and I have worked together for a very long time. We have a very close relationship. And I just didn’t, I thought he thought more of me. I thought he would at least give me a phone call, give me a heads-up, let me just weigh in. And if he doesn’t agree with it, that’s fine. But not even getting a chance to weigh in? It says a lot, it says a lot about what he thinks about me, it says a lot about what Erika thinks about me, and unfortunately, it’s put me in a real pretzel. Because I don’t really know where that leaves me.”

As mentioned in there, Katz is listed as a key figure in Barstool’s agreement with Penn National, so it wouldn’t necessarily be all that easy for him to leave even if he wanted to. And he is under contract. But under-contract people have worked out agreements to leave Barstool before (as with the Call Her Daddy saga that led to Sofia Franklyn leaving), so Katz isn’t necessarily stuck there if he doesn’t want to be. We’ll see if his complaints about not being consulted here lead to anything.