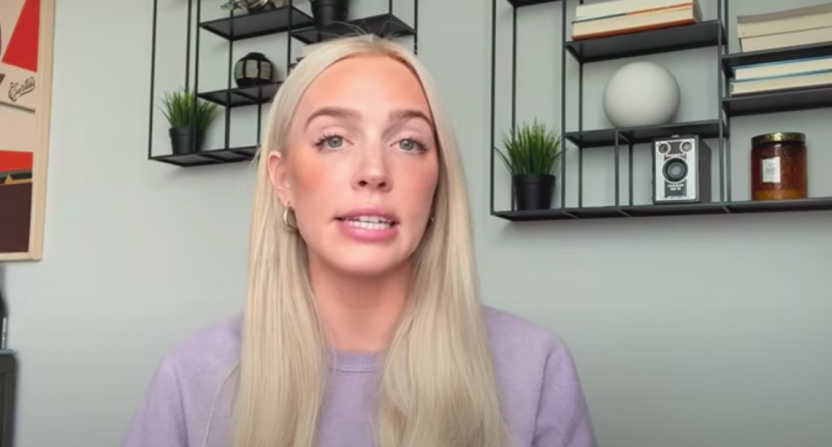 There are many things you can say about Barstool Sports, their personalities, and the sagas that unfold between them. Uninteresting is not one of those things.

The latest brouhaha to come out of Barstool Land involves the extremely popular “Call Her Daddy” podcast, which seemingly imploded last month but now appears to have been reborn following a fallout between the two hosts and rumors of a conflict of interest involving now-former host Sofia Franklyn’s boyfriend, HBO Sports Executive Vice President Peter Nelson.

First, a refresher and/or introduction to what we’re talking about here. The popular podcast “Call Her Daddy,” which features raunchy and unfiltered discussions about sex, dating, and life in NYC, was started by friends Sofia Franklyn and Alexandra Cooper in 2018. It quickly took off and Barstool swooped in and acquired the show within a month, helping it climb from 12,000 to two million downloads just as quickly. It has since been one of the highest-rated podcasts on the Apple Podcasts charts on a consistent basis.

Everything seemed to be going fine until early April when the show abruptly stopped publishing new episodes. The cryptically titled “Kesha… The End” was published on April 8 and then…nothing. Listeners (known as…deep breath…Daddy Gang) initially presumed that Barstool was silencing the hosts for unknown reasons, and an April 21 statement by both Franklyn and Cooper that they “legally can’t speak out yet” about what was happening only intensified the search for answers.

A New York Post report on May 16 introduced the revelation that Franklyn’s boyfriend, Peter Nelson, has inserted himself into the fray by attempting to get both hosts to leave Barstool for a new deal elsewhere.

The insider said the feud has been stirred up by Franklyn’s boyfriend, HBO Sports executive vice president Peter Nelson, 38, claiming that he has been advising them behind the scenes.

They were offered a deal with podcast network Wondery, the insider said, which was orchestrated by Nelson: “He was quietly shopping them even though they were still under contract with Barstool.”

Our own Ben Koo succinctly explained all of this in a recent post:

A simplified version of a complicated situation would be that Franklyn and her co-host, Alexandra Cooper, are embroiled in an extremely contentious contract renegotiation, the aim of which includes more money (duh), to regain the Call Her Daddy brand which Barstool acquired the rights to, and potentially their exit from Barstool altogether.

The next day, Barstool president and founder Dave Portnoy released an episode on the “Call Her Daddy” feed (titled “Daddy Speaks”) explaining the company’s side of things.

“I was starting to hear whispers and Alex confirmed it, and this is is a big part of the story. Sofia’s new boyfriend, which I guess Call Her Daddy people call “suit,” I call him fucking a bad guy from a James Bond movie who thinks he’s way smarter than he is……Peter Nelson, is that his name? HBO exec. Probably greenlit a hit piece on me not too long ago. But he had come into the mix. He was the one who brought in all these lawyers. The lawyer was his friend, I believe. This is what I believe, and he was openly shopping Call Her Daddy. He was acting almost as a manager, and he got a deal with Wondery. They were going to call the podcast “The Fathers.”

The hit piece that Portnoy is referring to is the HBO’s Real Sports segment that ran last year and painted Barstool Sports in a fairly unflattering light.

Going to go on a wild hunch and say there's going to still be some lawyers involved w/Barstool's @callherdaddy saga but it appears the show will just be @alexandracooper.

Says Cooper on YouTube: "I am so f—— excited to get the show back on the air." New episode Wednesday. pic.twitter.com/4aBxWRfVq4

Fast-forward to this past Friday when a few things happened in quick succession. The “Call Her Daddy” Twitterfeed was updated to include one host, Alexandra Cooper, while Franklyn was removed. Meanwhile, Cooper uploaded a 34-minute video to YouTube titled “The truth about Call Her Daddy” in which she tells her side of the story and announces that she has signed a new deal with Barstool and will resume the podcast as a solo endeavor.

According to Cooper, the problems between the duo began when they started renegotiating the second year of their three-year contract with Barstool. Per Cooper, the deal was initially set for $75,000 each in year one, $85,000 in year two, and $100,000 in year three. Three months into the deal, she says that the duo received raises. Cooper also notes that she received a separate raise for editing and marketing of the podcast, which was not shared with Franklyn. The difference in the amount of behind-the-scenes work that each host put into the podcast appears to have been a major source of friction between the two.

In the video, Cooper claims that Nelson was unhappy with the financial deal the hosts had in place and that it was below industry standards. At that point, Cooper says Nelson took over negotiations and made demands that included a guaranteed salary of $1 million for each host, more merchandise revenue, and the ability to regain ownership of the intellectual property rights.

“Dave Portnoy essentially told us to go F ourselves in every single hole possible,” says Cooper. “It was awful. Everyone was telling us that this was the deal…that document essentially pissed Dave off so much because he was like ‘I don’t even need to renegotiate with you guys.'”

This is when Nelson reportedly began shopping the hosts around to new networks and media outlets. While there appeared to be positive momentum, the two hosts had a meeting with Portnoy who extended them a new deal. Coopers says that while she was interested in taking the offer, Franklyn was “not matching my level of excitement at all.”

From there, per Cooper, Franklyn wanted to start fresh with a new show elsewhere, while Cooper decided to get her own representation and approach Barstool about a return by herself.

Portnoy confirmed the news on his Instagram feed, saying “we got the deal done today.” He also added that he did not have ill-will against Franklyn, though he capped everything by saying “it’s all now back to Alex Cooper and Peter Nelson, go fuck yourself, you fuck.” So there’s that.

For her part, Franklyn hasn’t updated her Twitterfeed since May 19, when she posted the introduction to a video explainer of her own side of the story. The full video was released via her Instagram Stories but is no longer live. The NY Post was able to record the highlights, which include Franklyn saying she felt like Cooper had gone behind her back in financial dealings with Barstool and was trying to take control of the show from her.

“I found out that Alex had gone behind my back and done something. And I found out it wasn’t the first time. And that’s why we’re here. I trusted Alex. I feel betrayed.”

“I am willing to do ‘Call Her Daddy.’ I really am. I just can’t do it under the circumstances that she wants,” she said, claiming “she is demanding that she controls the show.”

“At the end of the day, what it comes down to, is that I am very aware that this brand, the Daddy Gang, is bigger than Sofia and me. Much bigger. And I am so fucking excited to get the show back on the air. To continue to talk about sex…and blowjobs…and talk about shitty one-night stands…and get into it. And I think that it fucking sucks because the excitement I have, I wish Sofia had had that day on Dave’s rooftop.”

So there you go. You’re all caught up on the “Call Her Daddy” drama. You’re welcome.