Rough N’ Rowdy is supposed to be a piece of cornerstone content for Barstool Sports. Barstool has successfully held four shows, but it appears they don’t know how to deal with illegal streaming just yet.

LikeButta, a Twitch streamer, uploaded the 4th edition of Rough N’ Rowdy onto his stream for the world to see. Once it was posted to the Barstool Sports subreddit, it appears that the powers that be became aware of it. The official Barstool Twitch account then threatened to “swat” LikeButta if he did not take down the stream.

The incident in question has caused Twitch to suspend the channel. It isn’t immediately known how long the suspension will last. Per Deadspin, a Twitch spokesman wouldn’t comment on a length of time, but noted that Barstool did violate Twitch’s community guidelines by violating the “privacy of their users.” 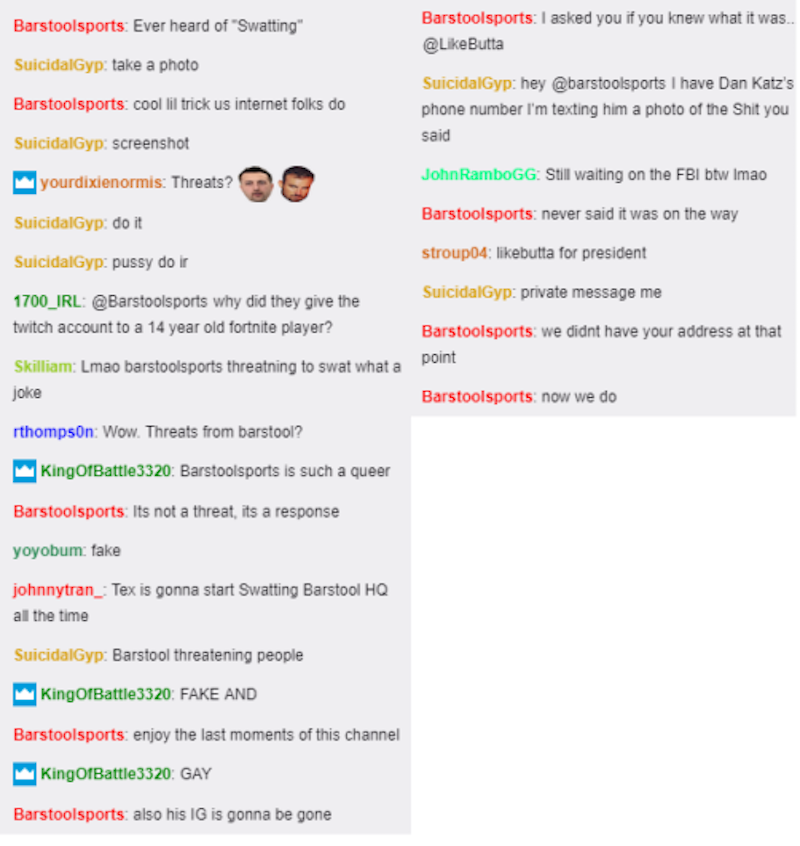 “Swatting” is a dangerous prank that has been growing in controversy, where someone finds out another person’s IP, calls 911 with an emergency at the user’s location, and urges the police to arrive at the person’s house. People have died from swatting in the past, and it carries criminal charges in some areas.

Devlin D’Zmura said that he was responsible for the threat and apologized for it during a radio segment on SiriusXM on Monday. He also issued an apology on Twitter to the person that he threatened to swat.

@LikeButtaFPS can’t DM wanted to give an apology somehow your way too. I was obviously over the line and there was no reason to take it that far whether I knew the severity or not. There are simply no excuses. Genuinely sorry for your troubles sir and what I’ve done here. Be well

D’Zmura is part of Barstool Gametime, a brand associated with gaming underneath the Barstool Sports umbrella. D’Zmura is also often seen operating the brand’s Instagram account as well recording around their New York office.