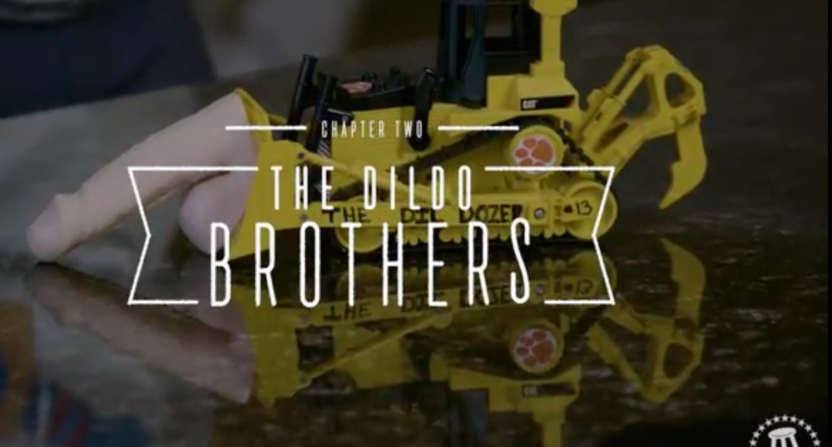 What if I told you…that someone would eventually make a documentary about Rick Pitino’s infamous restaurant bathroom sexual encounter with the woman who later married Pitino’s assistant, and later still tried to extort him and was sentenced to seven years in jail for that? Well, if you bet the someone in question would be Barstool Sports, you’re correct.

That’s just one of a slew of topics the site plans to cover in short-form documentaries. As founder Dave Portnoy and CEO Erika Nardini told Digiday’s Sahil Patel, they intend to boldly go where ESPN usually doesn’t. They kicked the series off with a 10-minute short on the drunken antics of Buffalo Bills’ fans (including the chapter on the infamous dildo-throwers, which is pictured above) released a couple of weeks ago, and they have much more in the works:

“It’s the perfect documentary for us,” said Barstool Sports CEO Erika Nardini. “It’s on a subject matter that most people would view as funny or crass, and we’ve turned it into something that’s cinematic but still funny. You’ll see that in other things that we do.”

Since its release, “#BillsMafia” has collected 7 million video views across BarstoolSports.com, Facebook, Instagram and Twitter. It’s the first of six documentary shorts that Barstool plans to release by the end of the year, all covering topics in Barstool’s wheelhouse. Topics include the sex scandal involving Louisville basketball coach Rick Pitino, the “Balloon Boy” hoax and the controversy surrounding NFL linebacker Manti Te’o’s nonexistent dead girlfriend.

“ESPN’s not doing a ‘30 for 30’ on Te’o’s dead girlfriend or ‘Six Seconds of Fury’ with Rick Pitino; we will,” said Barstool Sports founder Dave Portnoy.

“Traditional documentaries mostly appeal to a far more established audience,” added Nardini. “We’re appealing to the same guys who follow us on Instagram and love ‘Saturdays are for the Boys,’ and saying we’re going to give them a documentary, too.”

Social media views are notoriously unreliable, so take those stats with a grain of salt (especially as they’re presented without the average amount of time viewers watched for), but it’s clear the Bills’ film at the least managed to attract an audience. And it’s quite possible these other ones will too; Barstool has a prominent brand and a substantial audience, these subjects seem like a fit for both, and there are plenty of people who want to watch more on subjects like the Pitino scandal. Portnoy’s quite right that none of those particular subjects seem likely to draw the standard 30 for 30 treatment either, or even a 30 for 30 short. 30 for 30 certainly isn’t extensively profiling dildo-throwing fans.

It will be worth keeping an eye on how these later documentaries are constructed, though. The documentary on the Bills’ fans got decent access, but it had plenty of willing participants. Will Barstool be able to get any sort of access to the key players in stories like the Pitino or Te’o ones? Or will this just be people opining about it from afar? The latter approach might work too (especially as it’s been long enough since those stories that there will probably be some people eager to hear about them again, or for the first time), but it would be quite different from what we’ve usually seen in the sports documentary field. And Patel notes that while Barstool is fronting the costs for these, it may be harder to make that money back from a sponsorship on touchier subjects like the Pitino one.

In any case, there certainly seems to be more of a plan for video here than we’ve seen in other recent shifts in that direction. And it’s easy to see why Barstool would greenlight short documentaries on subjects that fit their brand and audience; there’s a lot to suggest that might work, and in the case of this first one at least, it appears to have done pretty decently. It will be interesting to see how the later ones come together and how the views stack up for them, though. And it will be worth watching how they’re received, and if Barstool keeps going with this plan after this initial wave.