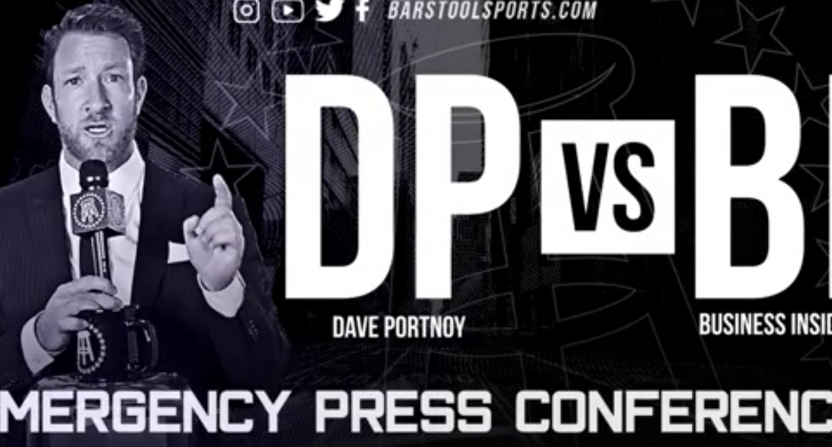 Ever since the Business Insider piece from Julia Black that ran last Thursday with the headline of “‘I was literally screaming in pain’: Young women say they met Barstool Sports founder Dave Portnoy for sex and it turned violent and humiliating,” Barstool figures have been pushing back. The ways they’ve done that have been different, though. Many Barstool personalities took to Twitter to talk about how they “believe Dave” and how “honest” he’s been with them, while Portnoy himself took a harder tack, sending out initial videos  accusing Black and Business Insider of a “hit piece” and ulterior motives, then going  o “your head is going to be on my spike” in a Twitter video that tagged BI CEO Henry Blodget (and also saw Portnoy swinging a mallet and saying he was going to use it on Blodget’s head):

It's the top of the first. Nobody on nobody out. I haven't even started @hblodget pic.twitter.com/I5kqB0OfUO

On Thursday, Portnoy delivered another video rant about BI and Blodget:

?NEW TOKEN CEO?@EKANardini gives her thoughts on last week's article about Dave & breaks down all the questions it's brought up.

Here are some of Nardini’s particular comments, via Reice Shipley at Barrett Sports Media:

“The piece was extremely hard for me to read. It was hard for me because I don’t think any women should be forced to do anything against their will. Regardless of how that story was constructed or who it was about, that is something that I stand behind.” said Nardini.

“The second thing that was really disturbing was how that piece came together. The fact that it dropped the same day as Penn’s earnings. The fact that I’d heard about the piece almost a year before from a hedge fund manager who was actively shorting the stock.

“It was hard to see something written like that about someone that I work so closely with and have so much respect for. Who I have a deep friendship and partnership with and who I care about immensely.”

…“Dave Portnoy is the most honest forthright person I have ever met, and 100 percent to a fault. I trust Dave and I believe him, and the facts are saying that what Dave has been saying is true.”

The different Barstool reactions here appear to be targeted at different audiences. The comments from Nardini are a calmer response they can point to for investors. And dealing with investors does matter for them given recent stock slumps at corporate parent Penn National; that’s not necessarily all about this issue, as Penn has posted slow online growth, missed out on getting a New York gambling license, and saw significant selloffs from hedge funds earlier this year, but this does appear to be of some concern to some investors. And it’s worth noting that while Nardini discusses this in more of a serious tone, the substance of her comments is still pretty similar to what Portnoy has been saying, claiming that piece came with an agenda to tank Penn stock, saying she believes Portnoy, and not committing to any investigation or other action. She’s not talking about heads on spikes, but she’s certainly standing behind Portnoy and ripping Business Insider.

Meanwhile, Portnoy’s comments here appear primarily targeted at Barstool fans, and at fans of him in particular. His fired-up, ranting approach has been fine for him in the past, and he seems to be sticking with it. And what’s maybe the most notable about all this is we’ve seen it all before as a reaction to coverage of Barstool, even to the degree of blaming executives and agendas that the companies deny had any involvement in the coverage. That happened with HBO’s Real Sports piece on Barstool,  it happened around Michael Rapaport’s lawsuit (eventually dismissed), it happened around discussion of Barstool’s offensive speech waiver, and it happened with the Call Her Daddy contract negotiations. As AA’s Ben Koo pointed out, Barstool seems to have a pretty boilerplate playbook in handling these scandals and controversies which almost always seems part of their overall strategy to grow their business.

On the heels of the Insider article alleging sexual violence and intimidation women under 20 years old, Dave Portnoy challenged the Stoolies to buy his frozen pizza brand

And they did. I wrote this in 2019 and even these allegations didn’t throw a wrench in the Barstool playbook pic.twitter.com/npY5jzST1s

In each case, Portnoy went on a rant, Nardini generally backed him but in a less dramatic way, and the criticism over that particular issue eventually died down, but almost always after some type of counter attack by Barstool.  Despite the severity of this most recent controversy, it seems once again the pattern will hold.