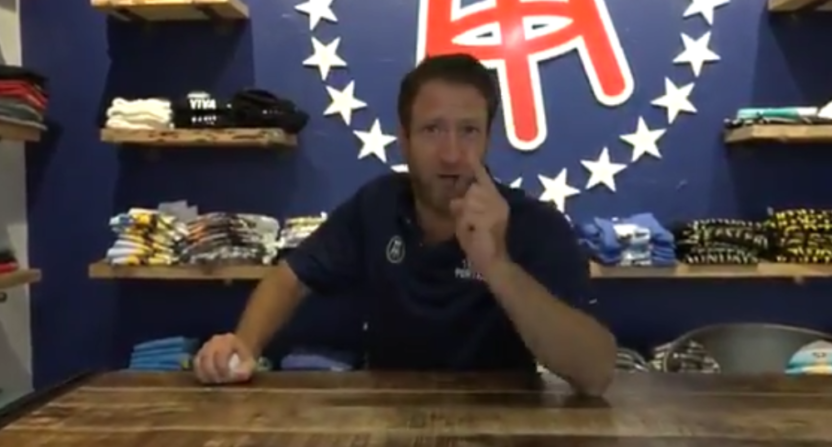 Discussions of objectionable conduct and sexual harassment are permeating many industries in the wake of the Harvey Weinstein saga, and they’ve hit the sports world with complaints of harassment against NESN anchor Marc James and now talk about Barstool Sports (a new potential ESPN partner) wanting employees to sign waivers where they expressly agree they don’t object to “offensive speech” or “speech and conduct that explictly relates to sex, sexual orientation, gender, national origin, religion, disability and age.”

(Update: Barstool CEO Erika Nardini took to Twitter Wednesday night to say that every employee has to sign this contract “to ensure that they are comfortable not only with the type of content we create but with the process of creating it.” She also said that Barstool has a “zero tolerance harassment policy.” Her full response can be seen near the bottom of this post. Original post follows.)

This came out publicly thanks to Elika Sadeghi discussing it in a Twitter thread; she blacked out the company name, but others, including Ryan Glasspiegel of The Big Lead, publicly stated it was Barstool. That led to Barstool founder Dave Portnoy then criticizing Sadeghi in a video. First, here’s Sadeghi’s tweet with the waiver:

They wanted me to sign this. I refused, for multiple reasons. I ultimately decided I didn't want it, even if I was exempt from signing this. pic.twitter.com/3psAPIvKrQ

That tweet comes in a thread where Sadeghi says she wasn’t going to share this, “but recent events have made me realize how important it can be,”and where she said the waiver may be unenforceable, but “is likely meant to make people feel like they can’t speak up if something happens.”

She then tweeted this makes people “feel powerless to speak up.”

That's how things like this happen. Not always through contracts, but through a variety of ways in which people feel powerless to speak up.

Sadeghi goes on to say the existence of the waiver caused her to walk away from the job. She doesn’t name the company, but others were quick to name Barstool, and that led to Portnoy delivering a video blasting her:

It’s sad when people who crave attention insert themselves in important stories just to make it about themselves pic.twitter.com/PlvA3NQYo3

“All right, real quick, I got to talk about this Elika Sadeghi girl. If you haven’t read, she went on a series of tweet rants, and I’m doing the “Serenity Now” ball, so I don’t go absolutely bananas, which I already have. I’m just trying to relax. Basically, we tried to hire her. People may remember, she was in the office, we had a good repertoire, we needed somebody for the college football show, she’s a college football expert. We offered her a two-year deal, she accepted it, and then retracted, backtracked, basically because we had a clause in our employment agreements, which to be honest I had never seen. 10 years, we don’t have contracts, we get bought by Chernin Group, lawyers, you know, contracts, basically, and you can read her tweets, basically said she couldn’t sue us over offensive remarks, whether it be sex, race, creed, whatever.”

“Pretty boilerplate stuff. You work at Saturday Night Live, you sign that. You can’t be offended by eating ass jokes, 69 jokes, Jew jokes, you just can’t. Because we do it 24/7. She redacted our name, but everybody knows because she kind of has a big mouth, we offered her a contract, she wanted everyone to know that she turned us down. Thank fricking god, because it would have been a nightmare working with this girl. Everything works out for the best. She tried to say because of the news of the day, I guess Harvey Weinstein and shit like that, that she had to go public to defend other girls.”

“This girl’s the biggest fraud. She’s trying to make herself part of the story. She said to us she never had the feeling we treated anybody with disrespect. She didn’t think that was Barstool employees. She got mad about a legal clause. A legal clause! We’ve never…Jenna Marbles, superstar, go ask her. Did we sexually harass her? Did we treat her with disrespect? No, we made her a star. Ask the girls we have in the office, we have a ton of them. We don’t do that.”

“And I resent…and people, by the way, are going to connect the dots. The fact she redacted us, that’s just charity case. Redacting means nothing, I’m getting blown up about this. Well, fuck you for making us part of this. We had nothing to do with this story. I’m not Harvey Weinstein. Every major media company right now, I don’t want to throw them under the bus, but lots of them are having sexual harassment issues. We never have. Not because of this clause, we’ve never had the clause. We just started making people sign contracts. We were told we need stuff like this to protect us or we’re going to get sued by people pursuing personal agendas.’

“Which, I think that may be what’s happening here. She’s trying to make herself part of a story that she is not part of. And neither is Barstool Sports. I want to clear the air. You don’t understand that, that has nothing, we’re not saying you can go grope somebody, we’re not saying you can sexually harass somebody, we’re saying that we’re going to make jokes and you’ve got to be cool with it. That’s all. And her other reason was ‘I can’t sign this because somebody will leak it, and they they’ll be like ‘Hey, Elika, how could you sign this?’ Nobody leaked it! You leaked it! You friggin’ leaked it to make yourself part of the friggin’ story! Leave us out of it!”

“All the sexual harassment stuff like that, people always throw arrows and throw stones at us no matter what. We haven’t done shit! Leave us out of it! What is it, Frankie, ‘Keep my name off your lips’? Hey Elika, keep our name off your lips. We treated you with nothing but respect and friggin’ dignity. We offered you a job. And this is how you say thank you, with this garbage? To try and make yourself the center of a story and get people to talk about you? Get out of here! It’s friggin’ garbage. It’s rubbish, and it’s garbage, and I won’t stand for it.”

Not only with the type of content we create but the process of creating it. There should be no confusion to outsiders between the disclaimer

This contract makes surrounding our content creation and what is deemed acceptable within our workplace culture.

Everyone who works at Barstool is committed to making it the best it can be. People who don't want to do that shouldn't work here. Viva.

It should be noted that Barstool’s waiver here is not a sports media standard, and isn’t necessarily the “boilerplate” Portnoy calls it. Nothing stating an employee expressly does not object to offensive speech and conduct has been in any of the numerous industry contracts we’ve reviewed. And the waiver has taken plenty of criticism on Twitter.

However, Ian Karmel, a comedian who has written for Chelsea Lately and the Late Late Show With James Corden, seemingly disagreed with the Twitter critics on this one.

I'm not sure what the rules are for new media like Barstool, but for TV writers its protected & even went to court.

There’s also a 2006 sexual harassment lawsuit against Warner Bros related to crude comments in the writers room of Friends that was thrown out.

In ruling unanimously for Warner Bros. Television Productions, the state high court said the show’s writers did not direct their lewd comments at the woman who sued them or at women particularly.

State law “does not outlaw sexually coarse and vulgar language or conduct that merely offends,” Justice Marvin R. Baxter wrote for the court.

Baxter said the court based its decision “on the totality of the undisputed circumstances, particularly the fact the ‘Friends’ production was a creative workplace focused on generating scripts for an adult-oriented comedy show featuring sexual themes.”

At any rate, Portnoy’s response has certainly made it explicitly clear that this waiver was for Barstool Sports, and that they’re standing by it. We’ll see if anything further comes from this.