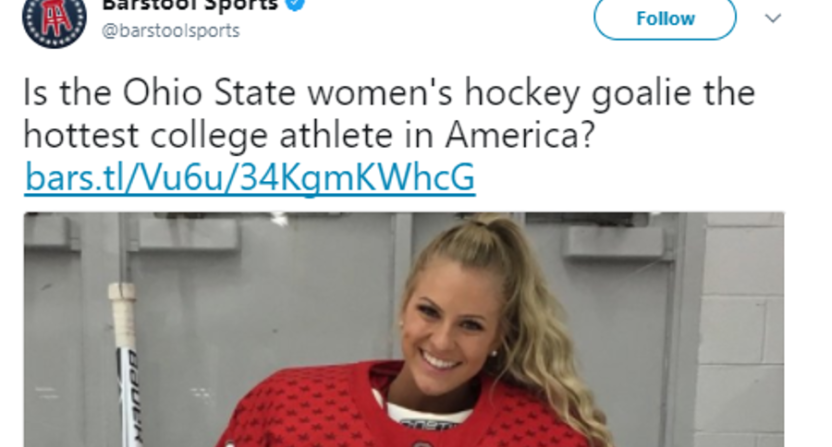 Barstool Sports is a site with a massive audience and many corporate partnerships; it’s also a site that regularly posts pictures of scantily-clad women, opines on the appearance of female athletes, and takes blowback for doing those things. Both of those aspects have been on display this week, with Mark Burns writing a Forbes story about the new “The Barstool Tailgate Show” on Facebook and the Barstool Twitter account posting a story asking if Ohio State women’s hockey goalie Maggie Cory was “the hottest college athlete in America,” generating significant pushback, and then apparently deleting the story.

Update: Barstool has responded, saying they took down this post because Cory asked them to: 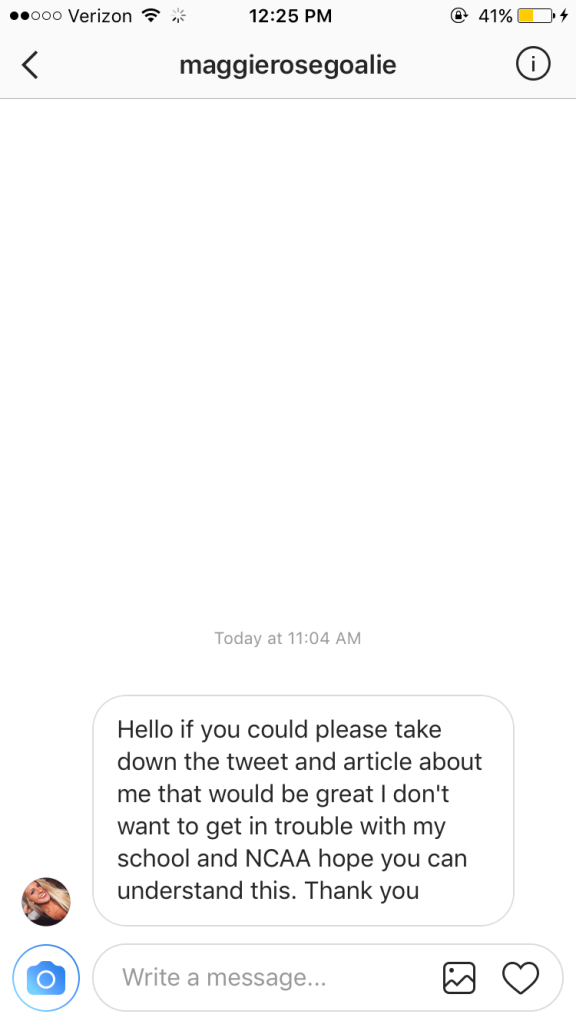 Here’s part of what their writer KMarko wrote about this:

Since I started working here 8 years ago our policy has been the same.  If a girl asks to be taken off the website, we take her off the website.  Maggie asked if we could please take the post down.   Gaz forwarded me the screenshot, I clicked over and moved it to Drafts and went back to writing something else.

That link produces a 404 error, and even the cached version doesn’t work, only providing a list of Barstool headlines, but we can get an idea what it contained from places that aggregated it. One of those is Maxim, which has also deleted their story. Its cached version lives, however:

We’ve seen our share of hockey hotties, most notably the badass babes of the U.S. Women’s National Hockey Team who stripped down for ESPN’s “Body Issue.”

And thanks to our friends at Barstool Sports, which boldly asked if she was “the hottest college athlete in America”, we can now introduce yet another puck-slapping stunner who’s poised to capture the imaginations of hockey fans–Maggie Cory.

The wholesome Minnesota native committed to play goaltender for the Ohio State Buckeyes women’s hockey team back in January. Decked out in the university’s uniform, the pretty blonde looks ready to kick some serious ass on the ice.
With only 20 posts, Cory has racked up an impressive 10,000-plus Instagram followers.
That number will surely only increase throughout her rookie season, especially if she keeps posting shots like these.

This was also aggregated at hockeyfeed.com (and is still up there), with the following content:

Not since Manon Rheaume have so many men fallen in love with a goaltender. Piercing eyes and gorgeous blonde hair aside, we’re big fans of her brand new all red set up for 2017-18, as well. The Minnesota native is poised to do big things with the Buckeyes this season and you can bet that she’ll have a few more sets of eyes on her this time around.

The Barstool piece has taken major blowback, though, perhaps most notably from Bleacher Report’s Natalie Weiner:

This is fucking nauseating. https://t.co/9xRWaiNm0s

She wasn’t the only one to bash it:

this is disgusting and you should all be *super* embarrassed.

Barstool Sports commenting on the appearance of women isn’t new, though. They regularly feature “smokeshows,” as illustrated by this look at their latest posts Wednesday afternoon: 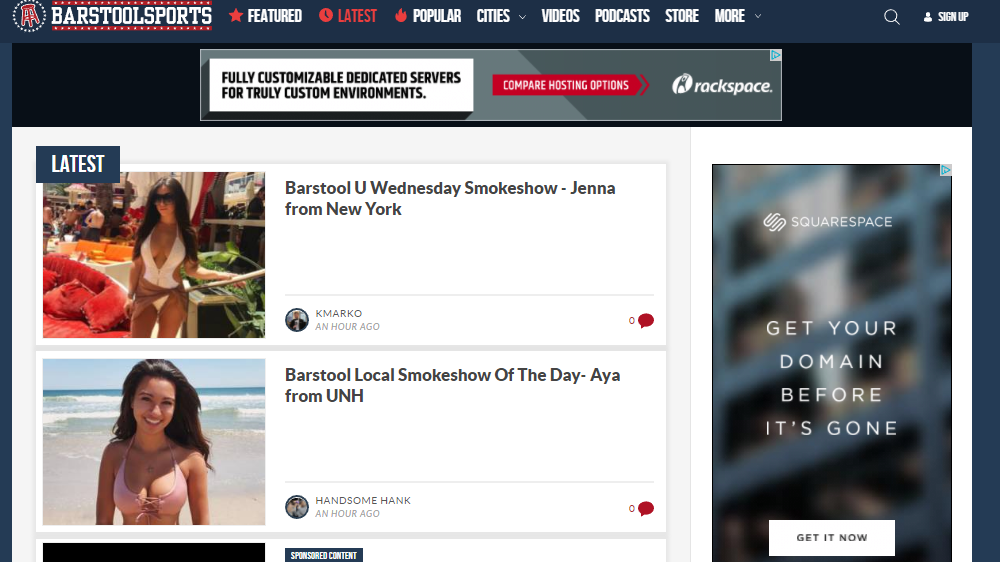 What’s perhaps more interesting is that Barstool deleted this off their site, and that Maxim deleted the post referencing their post, but that Barstool has kept this up on Twitter. Barstool has not regularly been a site that deletes posts over backlash. And this is far from the first time they’ve been accused of sexism; Nick Stellini’s detailed piece on Barstool and their social media use in January 2016 is perhaps the most pointed example of Barstool criticism, but there’s been a lot of it elsewhere as well. Generally, though, Barstool has shrugged it off and kept on doing what they do, so it’s curious that they deleted this post.

A big question to ponder with Barstool is how their increasingly-mainstream presence and expanded profile will fit with their controversial content. They’ve hired former athletes like Pat McAfee and Dallas Braden, they’ve done TV specials, they’ve talked with FS1 about a late-night show, and now they’ve signed on to Facebook’s program of video shows. Burns has some interesting details about what this “Barstool Tailgate Show” is going to look like:

Dubbed ‘The Barstool Tailgate Show’, the new piece of video programming will cover college football from different campuses over the course of the 2017 season, with all 10 shows set to air on Facebook Live prior to the Saturday primetime game. Barstool founder Dave Portnoy and former NFL punter and brand personality Pat McAfee will host each episode as they discuss traditional college football storylines along with some of the more comedic news and happenings in college sports. Each show is scheduled between 22-35 minutes.

Chief Executive Officer Erika Nardini explained that there isn’t a brand which relates better to college guys than Barstool, calling the partnership with Facebook “a logical progression that we’re creating commentary and programming around their sports.” The former AOL executive said that one of the overarching goals with each Facebook production is to capture the energy and atmosphere on campus, regardless if the broadcast is from a tailgate or local bar.

Said Nardini: “Prior to last fall, the Barstool guys had only used Periscope (for video) because the Facebook Live product really didn’t exist, and we just didn’t put any emphasis on it. I think there’s a couple of things we really like about Facebook. Their emphasis on video is unparalleled, both long and short-form video. Two, the live experience whereby the way you can interact with live and connect what we’re doing on Instagram and Instagram Stories with what we’re doing in the live broadcast creates what we feel is a great environment for fun programming. Then, obviously the power of Facebook and with the Watch distribution, I think you’ll see that rival traditional broadcast. That’s what we’re betting on.”

“Rival traditional broadcast” is an interesting line. On some levels, maybe, but it’s worth taking whatever audience numbers emerge here with a grain of salt, especially considering that Facebook videos have often only recorded 20 seconds or less of viewing and that Facebook drew controversy this week for saying it can reach more young Americans than census data says exist:

Facebook faced criticism on Wednesday after an analyst pointed out that the company’s online advertising tools claim they can reach 25 million more young Americans than the United States census says exist.

The analyst, Brian Wieser at Pivotal Research, said in a note Tuesday that Facebook’s Ads Manager says it can potentially reach 41 million 18- to 24-year-olds in the United States and 60 million 25- to 34-year-olds. The catch, according to Mr. Wieser: the census counted just 31 million 18-to-24-year-olds last year and 45 million 25-to-34-year-olds.

“The buyers and marketers I talked to were unaware of this and they are using it for planning purposes,” Mr. Wieser said in an interview. “Buyers are still going to buy from them and plan for them, but this is something that doesn’t need to be an error and puts every other metric they might provide into question.”

So, yeah, Barstool’s Facebook show will definitely draw significant numbers, but those numbers shouldn’t be repeated blindly, and saying that any sort of streaming video product is competing with TV feels like a stretch at the moment. But regardless of that, it’s clear that Barstool is becoming bigger and bigger, and they’re hiring more and more well-known athletes and personalities. Burns’ story mentions that one new addition is former Ohio State and NFL linebacker A.J. Hawk, and that other names could follow for this campus show:

For the inaugural show at Ohio State this Saturday, Portnoy and McAfee will be accompanied by ex-NFL linebacker and Ohio State alumnus A.J. Hawk, who is also a co-host of the new Barstool football podcast ‘Laces Out’. Nardini said that not only will notable school alumni be targeted as show guests but there could be a rotation of other Barstool personalities making Facebook appearances. She also mentioned the possibility of “bringing on new talent altogether,” though she didn’t elaborate on who that could be.

Barstool is also launching a weekly “Barstool U” Snapchat show on campus culture this week, and they’re rolling out documentaries on off-the-field aspects of sports, such as Bills’ tailgating and dildo-throwing, Rick Pitino’s sex scandal and Manti Te’o’s fake girlfriend. So, they’re becoming a bigger and bigger brand all the time, but they’re obviously still keeping much of their edgy content. That perhaps makes it yet more interesting when they do back down and delete a post like this one on Cory, though. It makes one wonder what motivated that, and if it’s a one-off situation, or evidence that Barstool’s line of what’s acceptable is changing a bit with their added mainstream presence.