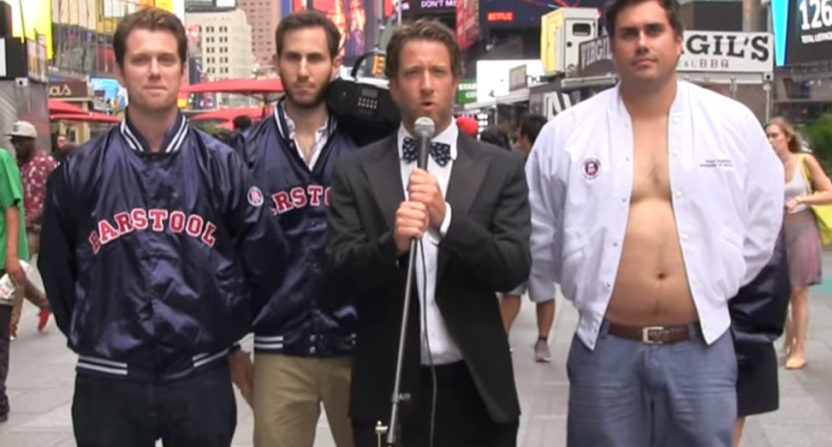 There’s been talk for quite a while about Barstool Sports expanding into premium subscriber-only content, and now it seems that day is closer. Back in July, Mark Burns wrote at Forbes that Barstool CEO Erika Nardini was “exploring” a premium subscription service, and the company’s delved into other forms of direct revenue with apparel sales (including their big Black Friday one) and pay-per-views such as the Rough N Rowdy fighting contest (they’ve now bought that company).

“We have a premium service that we’ll eventually be launching,” Portnoy said. “Not sure when. Don’t fucking freak out all of the people. It won’t be, we’re not going to put shit behind a paywall, but it’ll be new stuff. (The Chernin Group) wants us to do it, so it’s very important to the company, blah blah blah. We are going to do it. One of the things, like video and it’s a package. You’re going to get a bunch of extra shit. Again, probably not supposed to talk about it, but I talk about what I want to talk about.”

Portnoy went on to further explain the video element of the premium offering, and Barstool blogger Kevin Clancy chimed in, saying that there would be a simulcast element to it.

“You can watch us. There will be extra content. There will be all sorts of perks, a whole nice package,” added Clancy, although it’s unclear which Barstool podcasts and radio elements would be simulcast, whether maybe in real-time or on-demand.

Barstool announced last month that it would also be launching a 24/7 channel on SiriusXM in January. Maybe some of those shows could be packaged into the premium offering as well.

“They’ll be more coming on that in the future,” continued Portnoy on Barstool Radio about the premium service. “In my head, I quickly did the math. It’s like, what’s the downside of saying it’s coming? Nothing in my mind.”

This idea’s been floated even before Nardini’s July comments, as a Reddit thread from last November mentioned Clancy (KFC) saying premium is “obviously in the future of this company.” And that makes some sense on a few fronts. First off, the media world is getting hit hard in general, with Mashable’s sale to Ziff Davis for less than $50 million (less than a fifth of its April 2016 valuation) and associated layoffs just the latest example in a brutal year for media, from national to local to digital-only. Digital advertising revenue is particularly bad, especially with so much of it going to Facebook and Google, and that’s sparked calls for consolidation.

And short-form videos alone aren’t going to make up the difference, with many publishers ordering less of those series. Barstool in particular knows that, with their Barstool Tailgate Show on Facebook only lasting six weeks. (Logistical and production issues were cited in the mutual decision to end that series, and they still could wind up doing other things with Facebook, which Nardini called “one of our most important partners,” but it’s still a case in point of not every Facebook show working out well.) So lots of media companies and personalities are looking to get into premium content (from Sports Illustrated to Clay Travis), and Barstool’s large and passionate fanbase would seem to make them a good fit for this kind of play. It also makes sense that Barstool majority owners Chernin want this to happen; they’re putting lots of money into Barstool on the content side, and it’s logical for them to look for revenue sources beyond advertising, PPVs and merchandise.

The key questions are going to be what’s put on this premium service, how many people will subscribe to it, and how those who don’t subscribe to it will react. Portnoy’s comment about “we’re not going to put shit behind a paywall, it will be new stuff” suggests this will be content that wasn’t previously available, and that’s probably a smart call; many people really resent being told to pay for what they were previously offered without an extra fee, as the reaction to NBC’s Premier League streaming changes has shown. If Barstool offers new content on a premium service, then those who want can subscribe, and there probably won’t be huge backlash from those who don’t pay for the extra stuff.

But this company’s already creating a lot of content, so there are challenges to consider in terms of doing more without diluting their brand. (That may be part of why Portnoy doesn’t seem super excited about this idea.) There are also challenges in terms of getting fans who are already consuming a lot of your content to pony up for even more. And it should be noted that it’s a very crowded sports and entertainment marketplace, with a whole lot of subscription options out there for everything from written to audio to video content. To make this work, Barstool is going to have to create further content that’s in high demand, and charge a price that fans are willing to pay. We’ll see how this works out for them.