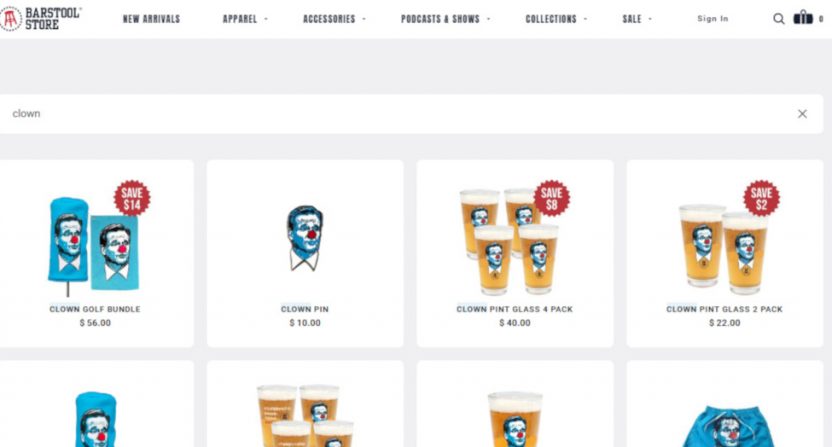 Barstool Sports appears to be involved in some more litigation, but this time, it’s not from a Massachusetts mayor or Michael Rapaport. Instead, they’re being sued by the designer of perhaps their most famous image: NFL commissioner Roger Goodell with a clown nose. That image has been used on everything from t-shirts (worn by the likes of New Orleans Saints’ head coach Sean Payton) to towels (distributed at a Patriots’ season-opening game in 2017 after the Deflategate saga, with one autographed by Tom Brady later being auctioned off for $6,500 at a charity event) to coffee mugs, cooler packs, pint glasses and bathing suits (some of which are seen above; you can see all the “clown” merchandise here), and Barstool founder Dave Portnoy wore one of those shirts at a protest against the Pope outside the Republican National Convention in 2016 while holding a “Goodell Is Hitler” sign (it’s exactly as weird as it sounds). And now, the designers of that image filed a lawsuit this week saying the 2015 deal they made with Barstool was a one-time-usage license and Barstool is violating their agreement by continuing to sell those products:

Barstool Sports must defend against a copyright infringement lawsuit filed July 8 in the Southern District of NY, claiming that it has commercialized the Sad Roger image without consent. Plaintiffs acknowledge a 1-time license in 2015 & allege it doesn't cover recent activities. pic.twitter.com/yFLPzuL4N4

As per TMZ, “The guys behind the suit are Jake Bernier, Kenneth LeMarier and Joseph Bernier … who claim they created Sad Roger and licensed it to Barstool for a ‘one-time use in 2015.'” For his part, Portnoy responded to this a few days ago (on July 8, when the lawsuit was filed) with a post titled “The Guys I Bought The Clown Shirt From Are Mad I’m Rich And They Are Poor And I’m Big And They Are Little So They Are Suing Me.” Some highlights:

Did these guys not get the memo I’m on vacation and have a cold? Jesus Christ. Now I got to write a blog about this shit. Here is the bad news for Jake Bernier and company. Unfortunately emails and DM’s don’t delete after 2 weeks. I bought this design fair and square back in 2015. I bought it for 300 bucks and some publicity for them. Now here is where it gets weird. We’ve continued to work with these guys. We’ve done probably 5-10 more designs in the past couple years with them. I have tons of DM’s. Guess how many times they complained? Zero. They’ve been happy as pigs and shit. They didn’t even have the balls to tell me they issued this lawsuit.

Also the facts are if I didn’t buy the Clown Shirt from them and make it famous nobody would know what it is. If it wasn’t for me it would still be worth 5 cents. I bought it at a fair price and made it famous. Now these guys are just ambulance chasing. America can be so sad. Don’t blame your failures in life on me. Be better at what you do.  I mean the guy literally says “once you buy it I assume you own it” and now 5 years later he decided to sue.   I think even Michael J Portnoy Esquire could win this one….

That post includes a series of DMs discussing the sale, which revolve around the Permanent Inc. guys saying they want to continue to sell the shirts themselves as well and Portnoy saying that’s fine as long as no one else does. It also has an email with this paragraph:

As outlined in our discussion earlier, We [Permanent Inc.] are granting you access to this design for a one time fee of $300. We will also continue to print and sell this design ourselves but will NOT extend access to any other designer,printer, etc. We ask that you make mention on your site where the design came from and to point out our website url [www.permanentinc.org] (which we will update to reflect “shirts now available via barstoolsports.com”) and our twitter account [@incpermanent]. We also ask that you provide us with a banner ad on your homepage at a future date (content subject to your approval).

“We’ve spoke with these guys a lot during the course of the last 5 years where they’ve done a bunch of designs for us,” Portnoy says. “They always act super happy, but never heard them ever say to me, ‘hey, we think you violated our contract.'”

“It could not be more black and white that they sold us the design. It’s sad. It’s disappointing that if they had this big of a problem, that they haven’t mentioned it.”

Portnoy says he expects an apology from the designers.

We’ll see where this one goes, but it’s certainly notable to see Barstool’s most famous image as the subject of litigation.