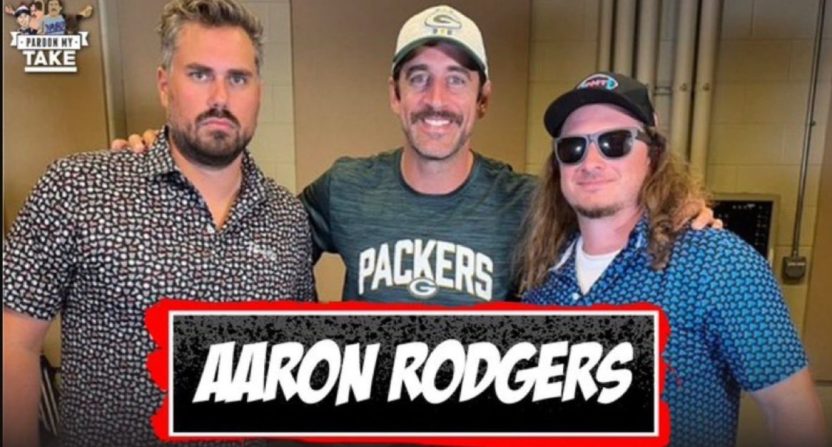 Aaron Rodgers went on Barstool’s Pardon My Take podcast earlier this week and the interview nearly went off the rails when he was sarcastically asked about people dying from COVID-19.

Co-host Dan “Big Cat” Katz recently joined ESPN Chicago’s Tom Waddle and Marc Silverman for his weekly appearance and the Barstool personality said he had no regrets about the interview with Rodgers, but realized asking the quarterback to estimate how many grandmothers he killed by not getting vaccinated against COVID may have been a mistake.

Rodgers infamously refused the COVID-19 vaccine, a status he misrepresented nearly one year ago as the quarterback said “yeah, I’m immunized” when reporters asked whether he was vaccinated. After he was later ridiculed for lying to the media, Rodgers repeatedly spoke out against the COVID vaccine during appearances on The Pat McAfee Show.

Although he refused the vaccine, Rodgers at least made it clear that COVID is a topic he doesn’t take lightly during his recent appearance on Pardon My Take.

“How many people do you think you killed? What’s your count?” joked Pardon My Take co-host Eric Sollenberger, commonly known as PFT Commenter.

“I mean, I know you guys are f***ing around but I don’t find that part funny,” Rodgers said, appearing to seethe at the sarcastic question. “I really don’t.”

During his appearance with Waddle and Silvy, Big Cat discussed the uncomfortable interaction with Rodgers, calling it “a good lesson that PFT and I sometimes have to learn.”

“That was one of those ones that you know, we don’t really live in the real world,” Big Cat said of hosting Pardon My Take, a comedic podcast that borderlines being a parody of more traditional sports shows. “So when we go out into the real world and we say something that we’ve been joking about in the confines of our studio on ears that haven’t heard those jokes before, it’s kind of like, ‘Wait, what did you guys just say? Are you guys really joking about grandmothers that died from COVID?’ And then when you get it repeated back to you, you’re like, ‘Oh, yeah that is kind of messed up. You’re right, good point.’ So yeah, maybe not the best, but we moved on. Score one for Aaron, but he was smiling, so it was all in good fun.”

“All in good fun” is an interesting way to categorize it. The moment didn’t appear to be “in good fun” for Rodgers, but the Pardon My Take hosts quickly shifted subjects and the trio went on to find topics they mutually agreed were in good fun for the podcast’s remaining 30 minutes or so.