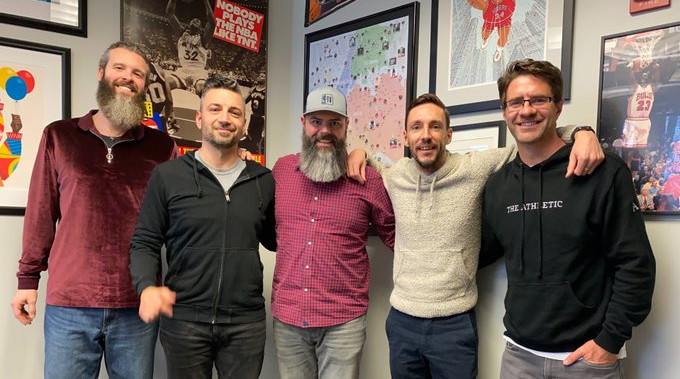 The Athletic has tried many different forays into the world of podcasts and video content, and not all of those have lasted. And, beyond that, while some of their high-profile additions have stuck around for the long term, others have been caught up in layoffs, approach-shifting cuts, or contract non-renewals. So it’s certainly notable to see one of their efforts well outside their typical written content not only extended, but expanded. That’s the case with “No Dunks,” the daily podcast/videocast from the crew formerly known as “The Starters” (during their six-year run with NBA TV) and “The Basketball Jones” (during their independent run, which dates back to 2006, with J.E. Skeets, Tas Melas, and producer Jason “JD” Doyle), and their subsequent time with The Score). That group joined The Athletic in October 2019, and as Liz Mullen writes at Sports Business Journal, they’ve now not only signed on for an extension, but also an expanded relationship:

CAA and Silver Tribe Media, a new talent management firm founded by former CAA broadcast agent Michael Klein, have negotiated a multiyear extension for media personalities behind The Athletic’s “No Dunks” program. …Financial details of the extension were not disclosed, but the agreement includes an expansion of the relationship between “No Dunks” and The Athletic to include video sales and distribution on YouTube and other platforms. Under the new deal, The Athletic will have the ability to sell the video of the show. The group will continue to produce the daily, hourlong podcast/vodcast.

The group includes Tas Melas, Phil “J.E. Skeets” Elder, Trey Kerby and Leigh Ellis. It is executive produced by Jason Doyle. …”We’ve been covering the NBA for over 15 years, and working for The Athletic has been the most fun we’ve ever had,” Elder told SBJ. “They’ve allowed us to spread our wings creatively, encouraging live watch parties on YouTube to interviewing ‘Survivor’ winners to writing about F1 racing. Honestly, they’re the best players’ coach a bunch of basketball sickos could ever ask for.” Klein, who left CAA a month ago to form Silver Tribe Media, negotiated this deal with CAA broadcast agent Matt Olson.

From a personal perspective, it’s nice to see the No Dunks crew continue to survive and thrive. There aren’t a whole lot of people from the 2006-era sports blogosphere still active in sports coverage, but these guys are, and they’re still doing a lot of what they did early on. This is also the only current podcast/vodcast to feature two former editors of Yahoo’s Ball Don’t Lie NBA blog, in Skeets and Kerby. (That highly-influential blog has produced an awful lot of talent still involved with NBA coverage, though, including Kelly Dwyer on his The Second Arrangement site and Dan Devine at The Ringer.) And they have a great current group of Kerby, Melas, Doyle, Skeets and Ellis, as seen from left to right above in a 2020 photo.

And the TBJ/Starters/No Dunks crew has kept their irreverent and funny approach to NBA coverage throughout their time with The Score, NBA TV, and now The Athletic. And they’ve kept a lot of their original fans while adding new ones.  So it’s cool to see a current sports media company that still values some of the old approaches, and it’s cool to see that the No Dunks crew has been able to keep this up for 15 years, and for more time to come. And this new expanded deal is also interesting, especially with Mullen’s note of “Under the new deal, The Athletic will have the ability to sell the video of the show.” That may help provide more leverage to get No Dunks back on TV somewhere, and that could further broaden its audience.