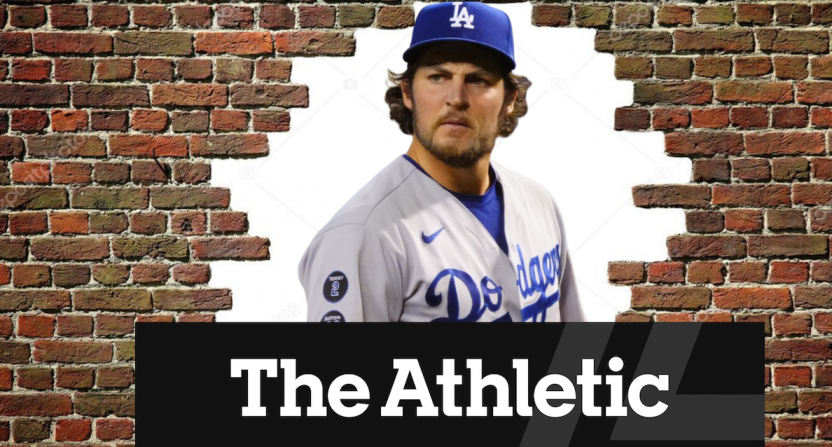 The report contains some graphic details and is troubling to read, but it’s an ugly story brought to light by some tough investigative journalism from Ghiroli and Strang. Both reporters have done similar work for The Athletic — for instance, a report on aggressive sexual misconduct by former New York Mets manager Mickey Callaway — and credit should be given to the outlet for providing a platform for this kind of work.

But The Athletic is a subscription-based entity with most of its content kept behind a paywall. As a result, those without a subscription to the publication weren’t allowed to read the Bauer article in its entirety. And that drew criticism from many people on social media who felt the piece should be available as a public service.

You should make this free. It’s quite important.

One response to that would be that subscribing to The Athletic isn’t terribly expensive. It works out to approximately five dollars per month. But people may not want to spend that money — or sign up for a seven-day trial — especially if they only want to read this one article.

Additionally, not everyone who wants to read the report is a sports fan wanting to read The Athletic’s coverage. The Bauer story is now in the mainstream news cycle and people may just prefer to learn about someone in the public eye who’s been accused of assault and look at the details to form their own opinion on the matter.

this is important and should not be being a paywall. this is not something to be profiting off of.

Yet quality journalism isn’t always offered for free. The Athletic depends on subscription revenue, in addition to investment funding the company has received, to exist.

Reporters like Ghiroli and Strang, along with the many others who work for the outlet, need and deserve to be paid for their work. The resources allowing such reporting to be done also needs to be funded. That requires money.

Seems insensitive to have a paywall on this to make a profit off of this, just my opinion.

Is the Bauer story something that The Athletic should profit from, as many people accused the site of in their criticism? Was this news that should be readily available, as opposed to analysis or opinion that readers can pay for if they so choose?

Is this comparable to, say, coronavirus coverage that was made available for free during the pandemic by outlets including the New York Times, Los Angeles Times, and The Atlantic that felt information was important enough to be accessible to anyone who wanted it?

Have you thought about opening this article up? This needs to be read by everyone.

Of course, this is the internet, so readers could find the story elsewhere if they chose to pursue it. Yet those stories were largely aggregated from The Athletic’s original reporting. Yahoo did so, as did our sister site The Comeback. The Washington Post and ESPN wrote similar accounts after obtaining a copy of the restraining order and receiving statements from Bauer’s representation and the alleged victim’s lawyer, but did not break the story.

Additionally, The Athletic made an unlocked version of the story available on the site’s home page soon after the full report was published.

This version is unlocked for all to read.

That said, supporting journalism allows for more people’s stories — the good and the horrific — to be told. https://t.co/9WIwsOJzbD

Another reality of the modern internet is that plenty of people will post paid content online for others to view for free. At least one Twitter user posted The Athletic’s story with a video of him scrolling through the text.

Another transferred the text to a document and posted it on Google Drive:

sharing the trevor bauer article for those who don’t have the athletic https://t.co/QBrC1woOts

We don’t know what sort, if any, internal discussions at The Athletic concerned publishing the Bauer report in front of the subscription paywall so everyone could read it. But an unlocked version of the story was made available for non-subscribers alongside the original article.

It is worth noting that The Athletic has made content available for all, such as breaking news pieces, selected articles, or an extended trial for anyone who wanted to give the outlet a look during the COVID-19 lockdown.

Did this story warrant availability to all as a public service? Obviously, The Athletic felt differently this time around. But if further coverage is published for all readers to read, not just subscribers, that question will have been answered.