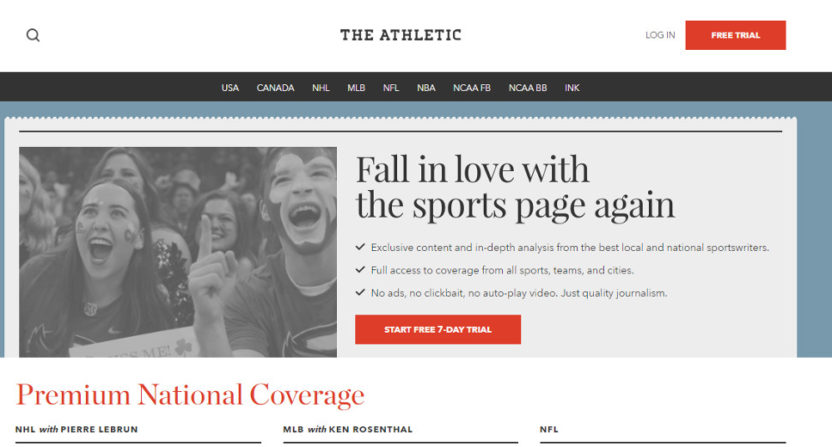 The many, many expansions of The Athletic seem set to continue. As per comments from CEO Alex Mather to Benjamin Mullin of The Wall Street Journal, the company has raised $20 million in a third round of funding led by Evolution Media (they previously raised $10 million in two rounds led by Courtside Ventures). And they have big plans for that new money:

The Athletic plans to use most of the financing to continue its expansion across the U.S., establishing a presence in every market with a professional sports team by the end of the year. By the end of 2018, the Athletic plans to have between 200 and 350 employees, up from its current staff of 120. The company currently has a foothold in 23 markets across the U.S. and Canada, and plans to expand to roughly 45 markets by the end of the year.

In the works are city sites for Boston and Los Angeles and coverage of soccer in the U.S., Mexico and the U.K., Mr. Mather said. The company is also planning to establish teams dedicated to coverage of NFL and the NBA nationally.

The national NFL and NBA sites certainly make sense, as they’ve previously gone down that road with national NCAA football and basketball sites, and national MLB and NHL sites more recently. The NFL and NBA have even bigger followings, so launching national sites there has plenty of appeal. A city site for Los Angeles definitely is logical too, given all the teams there, and one for Boston could work; that market does already have Greg Bedard’s subscription site, to say nothing of the many newspapers, radio and TV stations, but it also has a lot of passionate fans.

Soccer coverage in those three countries has merit too; The Athletic hasn’t really dove into soccer too heavily so far, apart from some pieces about local MLS teams on the city sites, but the sport has plenty of fans, and if The Athletic’s aim is to become a go-to universal sports site, it will need some coverage on those fronts.

But what’s perhaps particularly notable is the commentary about a presence in “every market with a professional sports team.” Presumably that’s for a certain definition of “professional” (likely the NFL, NBA, MLB and NHL, maybe also MLS, but even that definition is excluding a lot of other professional leagues). Even there, though, that’s going to take substantial expansion, and the doubling or more of the company’s markets and workforce. Last month, we discussed how The Athletic had beat writers covering 20 of the 30 MLB teams (though they have added a 21st team, the Kansas City Royals, since we published this post), and it looks like they’ll be pushing to make that all 30 by the end of the year.

Some notable markets on there beyond Boston: Baltimore/Washington, D.C. (six teams), Miami and Denver (four teams), and Atlanta, Tampa Bay and Milwaukee (three teams each, if you count the Green Bay Packers as a Milwaukee team). Expect those cities to wind up with Athletic verticals before too long.

What’s also interesting here is the financials. Here’s Mather’s commentary on that to Mullin:

The Athletic doesn’t have any advertising, but Mr. Mather said the company plans to begin testing sponsorship for events and podcasts in the coming months. He said the company is also considering syndication deals with local TV stations, but no such deals are in place yet.

The question is if The Athletic’s hirings and expansions can bring in enough revenue to pay for themselves in the end, and if cases like Chicago are the exception or the rule. The Athletic has shown it can attract significant masses of subscribers in some markets, but will it be able to do so in all of these markets it’s targeting? And are the people who have signed up so far a trend of what’s to come, or has the company already attracted most of the sports fans willing to pay each month for online subscription sportswriting and podcasts?

The newest round of investment suggests there are plenty of wealthy backers who believe in this idea, and there’s definitely now a lot of funding for the company to work with. We’ll see how their expansion goes.