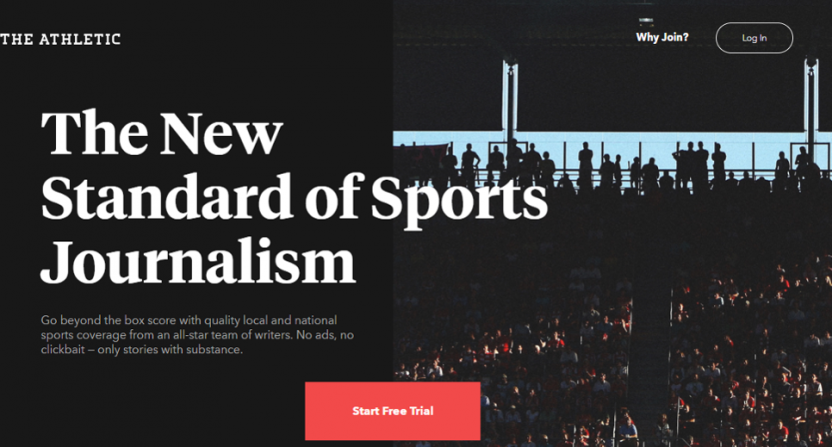 The dramatic funding growth continues for The Athletic. The site brought in $20 million in an Evolution Ventures-led round of funding in March (added to a previous $10 million they’d raised in two rounds led by Courtside Ventures), which was one of the largest rounds ever for a sports media company, really only behind the staggering $40 million in Series C funding The Players’ Tribune pulled in last January.

Well, The Athletic has now matched that, bringing in $40 million in their own Series C round at an estimated company valuation of $200 million. Here’s more on that from Sara Fischer at Axios:

Other participants in the round include former backers like Comcast Ventures, Evolution Media Capital, Courtside Ventures, The Chernin Group, Y Combinator, Advancit and Luminari, as well as new investors like Amasia and BDMI. While Peter Thiel is a founding partner at Founders Fund, sources say he’s not directly involved in the deal. The Athletic confirmed that partner Napolean Ta is brokering the deal.

The money will be used to invest in audience, data and editorial teams that drive subscriptions, per Athletic co-founder Alex Mather, as well as podcasts and video teams. Prior funds were used to poach veteran sports journalists with big salaries.

That last part is perhaps particularly interesting, and it suggests the company’s focus is shifting a bit from expansion to new markets to expansion to new mediums and investment in areas they already have a presence. After that March funding round, Mather talked about plans to expand the company from 23 to 45 markets and from 120 to 200-350 employees this year. It’s only October, but as per Fischer’s piece, they have 300 full-time employees and 47 markets, with Mather saying most of their markets are currently profitable.

But there isn’t an infinite supply of viable markets or important new hires out there; the company already launched/announced six new verticals in August, hit a long-time goal of coverage in all 32 NFL markets in September (and boosted their national NFL coverage with the hire of Jay Glazer), made their long-anticipated move into D.C., and beefed up national NBA coverage with hires like Shams Charania and Frank Isola.

It’s not quite Alexander “wept for there were no more worlds to conquer” (from Plutarch via Hans Gruber), as there are obviously plenty of sports media personalities out there who don’t currently work for The Athletic, but it’s approaching that; they now have a presence in most logical markets and verticals in most logical sports, and they’ve picked up a lot of the writers who seemingly would be a fit.

Thus, it seems reasonable that the focus with this new money isn’t just going to be on further expansion to every conceivable market. Expansion’s nice for advertising in the form of news coverage and social media discussion, and it’s useful for bringing in new subscribers, but not every expansion makes sense. Rather, the larger potential new subscriber pools out there are probably those who live in cities already served by The Athletic, but haven’t yet subscribed for one reason or another, and it sounds like the company’s trying to figure out ways to get them on board and get them to stick around.

Retaining those subscribers is going to be an important piece of the long-term picture here. Fischer’s article says The Athletic has “over 100,000 subscribers and a 90 percent renewal rate,” and those are both impressive numbers (even if the “over 100,000” isn’t actually any growth from the “six figures” Mather said they had in March), but the company’s going to need to keep that renewal rate high if it wants to survive for the long term. Investing in audience and data teams may help there, and providing further content with expanded podcasts and video may help convince current subscribers to renew. We’ll see what exactly they do with the money, but they certainly have a lot of money now.

At any rate, this is an incredible amount of funding by the standards of the sports media world, and it further expands The Athletic’s already-considerable resources. And it’s notable that in an age where there’s a lot of skepticism about the future of media outlets (both digital and print), there are a lot of investors who believe The Athletic’s no ads, direct-to-consumer subscription model makes them worth funding. That perhaps looks even better after the recent revelations of inflated Facebook video views, which prompted a lot of outlets to try pivots to video that didn’t actually reap many rewards.

There are still some questions about the long-term viability of The Athletic, including how many more potential subscribers are out there and how many current subscribers will stick with the company for the long run. However, this round of funding shows there are a lot of big investors that believe in what they’re doing. And it gives them the resources to be an important sports media player for years to come.