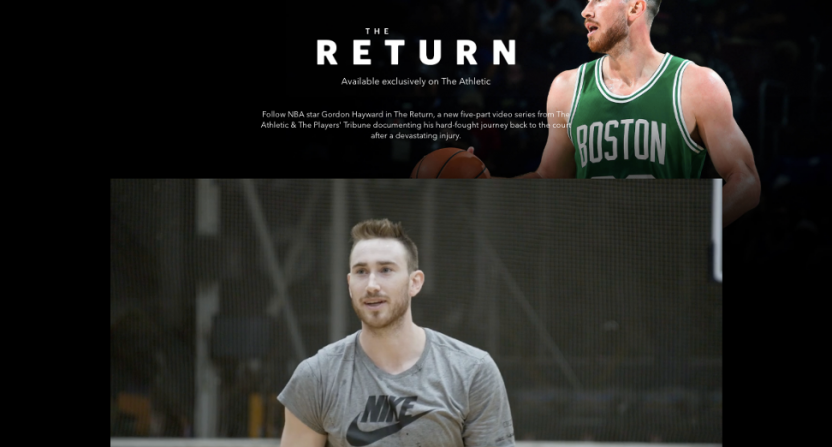 While The Athletic is not exactly following the many doomed sites that pivoted to video (appropriate, considering that much of their early success came from emphasizing quality written pieces and hiring writers who were let go or undervalued by video-chasing sites), they do seem to be planning on a major expansion of their audio and video content in addition to their written work. The company announced this week that they’d raised $40 million in Series C funding, one of the largest funding rounds ever, and in an interview with TechCrunch’s Eric Peckham, CEO Alex Mather said boosting audio and video content is a key goal with this new money:

We raised this Series C with audio and video in mind. We can tell even more stories when we add in audio and video possibilities. Our goal is to serve the subscriber: some love to read, some love to listen, others prefer to watch. We look up to things like The Ringer, Andre the Giant on HBO, VICE News, Gimlet, and The Daily by The New York Times all as incredible storytelling, and we ask ourselves “how can we do sports versions of those?”

The Athletic has already dove into some of those areas, of course. They already feature some podcasts, especially ones that some of their writers and editors had previously established, (like Tim Kawakami’s podcast), and they’ve done some video content, such as a collaboration with The Players’ Tribune for a series on Gordon Hayward (screenshot seen above), which was produced by TPT but only available on The Athletic’s website. But so far, much of the focus has been on written work. Going beyond that is an interesting idea, and it’s notable that just before his answer to Peckham about boosting audio and video, Mather talked about why the written emphasis had worked so well for them:

We’re obsessed with the consumer and all our research in the beginning said that people still like to read books and articles. Advertising with text may not be as good as with video, which may be why so many other companies “pivoted to video,” but we think the written word is still the best way to convey certain types of stories. It’s straightforward, it doesn’t require headphones.

There’s an incredible amount of talent out there that can produce these stories and that has been cast aside by many entities. We saw it as an opportunity to give them great jobs and bring value to our subscribers. That has paid off for us.

And the “cast aside” portion of that answer is a valuable element to consider here. Something that’s helped The Athletic stand out in a crowded sports field is their focus on in-depth written coverage, which, as Mather noted, not everyone is still doing. (And much of the other in-depth written coverage out there is ad-supported; The Athletic can offer an easier reading experience than many competitors thanks to not selling advertising and making their money just off subscriptions.) But the video and audio fields are much more crowded; there’s seemingly a new sports documentary announced every week, whether on a variety of TV channels or on digital platforms, to say nothing of the countless streaming analysis and discussion shows, and our massive “Should I Listen To This?” series is a small illustration of just how many podcasts are out there.

Also, it’s notable that doing any sort of in-depth audio or video content tends to carry significant production costs. Yes, this massive $40 million funding round will certainly help there, but there are plenty of other costs for The Athletic as well, especially with the size of their staff and with some of the big names they’ve hired. They can absolutely afford to dive into video and audio, and to try some different things out there. But it’s not like this is their only expense.

Could The Athletic find some success in the audio and video fields? Of course. They have a lot of talented people, some who already have experience with audio and video content and others who could unquestionably do it well. They also already have a significant subscriber base to promote this content to. But entering the audio and video markets in a big way isn’t easy, especially given all the competition out there. It will be interesting to see just how The Athletic approaches this, and how it works out for them.