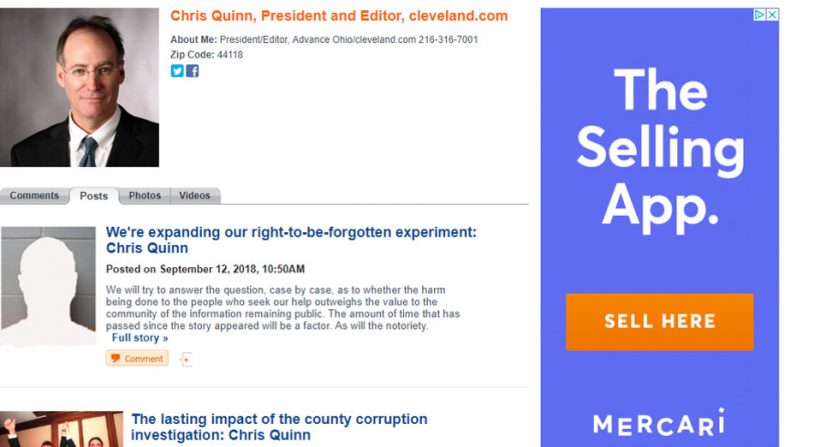 It’s no secret that many newspapers are seeing plenty of defections for The Athletic, the well-funded startup that’s ambitiously expanding. The company has reportedly offered many writers 15-36 percent pay boosts and small stakes in the company, to say nothing of their focus on features rather than print deadlines and video hits, and that’s a compelling offer for many. But that has some at their former companies annoyed, and Cleveland.com president and editor Chris Quinn (Cleveland.com is the umbrella site owned by Advance Publications/Newhouse Newspapers, and is closely linked to the Cleveland Plain Dealer) showed that in an unusual way Saturday, sending an angry internal all-hands email over the impending departure of basketball writer Joe Vardon (one of several NBA hires The Athletic announced Monday).

Quinn’s email is quite remarkable, as it goes way beyond the standard “We’re sorry to lose X.” In fact, it says that writers (including Vardon, who was copied on the email, and Zack Meisel, Ari Wasserman and Tom Reed, who already left Cleveland.com for The Athletic) would be foolish to choose The Athletic, claiming that their business model won’t work in the long run. Cleveland Scene editor-in-chief Vince Grzegorek posted that email Monday; here’s the key part:

I want to say a word about The Athletic, which suddenly seems frantic to raid our staff because of its inability to groom talented sportswriters on its own. Most of you know Joe Vardon is headed there, and they do not appear to be finished in their recruiting efforts.

This has the feeling of desperation to me. As I’ve mentioned since this thing started, it’s financial model is not sound. In the print days, the Daily tried it. In the digital era, Patch tried it. Each time someone tries it, an investor kicks in a huge amount of money to get the thing launched but because the financial model is so unsound, it always fails. If you could sustain an experienced staff on digital subscription revenue alone, we’d have gone that way a long time ago. To produce the kind of content we produce takes more than digital subscribers.

But suddenly, across the nation, the Athletic seems intent on raiding the top sports reporting staffs of each major city. This has the feeling of a last-ditch effort at survival, a strategy to try to savage the reigning sports voice quickly and try to steers fans to their site. Again, I feel certain the effort will fail. We not only lead the region in sports audience, but we continue to grow it. No one is knocking on our door. And, frankly, the Athletic is pretty awful. The writing is bloated, seemingly unedited wheezing, not at all what our sports audience has made clear it wants.

…I say all this because I suspect the onslaught will continue. If you get one of these limited-time offers, please take the time to talk with the folks here before making a rash decision. If they go under, a lot of veteran sports writers will be out of jobs in a suddenly glutted market. I’d hate for someone on our team to be one of them.

Look, some skepticism about The Athletic’s long-term prospects is reasonable. The sheer amount of staffers they have means they’ll need a lot of subscriptions to be profitable, and while their massive funding to this point means they don’t have to worry much yet, it’s far from certain that this will work for every team and every city where they currently have a presence. And yes, this could well go sideways and hurt those who jump. But it’s a bit rich for someone to suggest that newspaper or newspaper-linked digital content jobs are somehow safe or reliable in 2018 either, as we see countless layoffs there all the time. And while some may like Cleveland.com’s coverage better than The Athletic’s, there are plenty on the other side of that as well. It’s far from assured that “the kind of content we produce” is better at Cleveland.com.

Beyond that, though, the really remarkable thing is Quinn saying the quiet part out loud. Staff poaching by a digital startup is a reasonable thing for an editor to complain about over coffee or drinks with colleagues, or even in an email to other editors or bosses, but sending an all-hands e-mail about this is a step further. And how Quinn did so is pretty insulting; he implies that journalists who work for him aren’t capable of looking into offers and making a reasoned decision, claims that he knows better than anyone that The Athletic will fail, and even issues a veiled threat (“I’d hate for someone on our team to be one of them”). That’s particularly obnoxious when you consider that Vardon was one of the recipients of this email.

It’s no secret that The Athletic and local newspapers are at least somewhat in competition. In fact, on The Athletic’s side, co-founder Alex Mather made the same mistake of saying the quiet part out loud last October, commenting “We will wait every local paper out and let them continuously bleed until we are the last ones standing. …We will suck them dry of their best talent at every moment. We will make business extremely difficult for them.” He eventually somewhat apologized, but that comment is still notable as some proof that the animosity here certainly isn’t all on the newspaper side. H

However, there’s even a difference between those general comments of Mather’s (aimed at the entire newspaper industry) and the comments from Quinn, aimed specifically at one competitor and suggesting that his staffers are too dumb to evaluate job offers from that competitor on their own. And it’s worth noting that not every newspaper has seen such huge losses to The Athletic; for example, The Washington Post kept their talent despite offers, forcing The Athletic to look elsewhere. Yes, they have more resources than many, but it’s certainly possible to improve things for the talent you already have instead of whining about a new player in the space stealing your talent with better offers.

Of course, part of Quinn’s job is trying to retain talent, and that may have motivated him to send this email. But from this standpoint, that’s not going to work out so well for him. This isn’t a “We’re sorry to see talented people leave, but we’re looking forward to bringing in others” email, or even a “What can we do to make things better for you?” email; it’s an unnecessarily fearmongering email, and one that doesn’t appear to have a lot of factual basis right now. No one’s clear exactly what The Athletic will look like in a year or two years, but at the moment, it seems difficult to say that jobs there are inherently more threatened than those in the newspaper industry.

And while Quinn’s arguments about the challenges The Athletic may face could have some merit, he’d probably be better off making those quietly to other people who he’s worried about losing instead of putting them in an over-the-top email blast that was certain to get quoted elsewhere. The frustration’s understandable, but the response isn’t a good look. And it may not do much to help Cleveland.com avoid further losses.