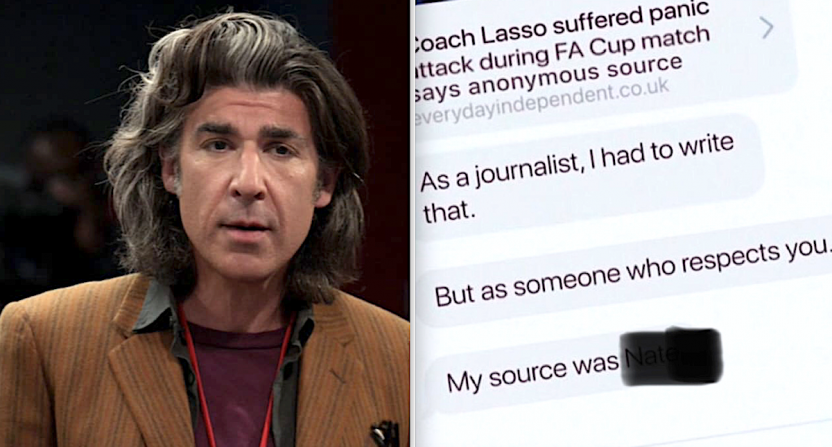 Did Trent Crimm, The Independent do the right thing?

Spoiler alert if you haven’t watched Episode 11, of Ted Lasso Season 2, “Midnight Train to Royston,” or if you’re waiting to binge the entire season later on. (Awful Announcing’s staff recap can be read here.)

Fans who have devotedly watched each episode every week know that the episode ended with a bombshell. Crimm informs Ted via text message that he is reporting that the manager left AFC Richmond’s match versus Tottenham due to a panic attack — not a stomach issue caused by food poisoning, as the public was told.

But here’s where the controversy comes for those who work in media: Crimm reveals that his source for the story was Nate, Ted’s assistant coach. A reporter giving up his source is highly unusual in the profession. Most would go further and call Crimm’s decision highly unethical.

Many actual reporters asserted that a journalist would never — and shouldn’t ever — give up a source like that.

C. Trent Rosecrans, longtime Cincinnati Reds beat reporter for The Athletic and current president of the Baseball Writers Association of America, agreed. Many reporters give the subject of a story a heads-up as to what’s coming. But they usually ask for comment beforehand.

“What bugged me was the order,” said Rosecrans. “He should have contacted Ted for comment/clarification before publishing. And then given the heads-up. Also, giving up the source is wrong.”

Several others in the profession criticized Crimm’s move on social media.

trent crimm is a shitty journalist, thank you and good night

I don’t like criticising other journalists but Trent Crimm from The Independent, what are you doing mate?

Trent Crimm did everything wrong. Didn’t go to Ted for comment before publishing. Seemingly didn’t have any additional sources confirming his intel. And then outed his only source. Unprompted. In writing. https://t.co/rhzlsMNmAg

And as a journalist, I have a *big* problem with what Trent Crimm (of The Independent) did at the end too. That would *never* happen pic.twitter.com/MSLl3qliZq

“I personally have never done this and don’t ever think I would, barring some particularly weird circumstances,” said Kyle Meinke, MLive.com’s Detroit Lions beat reporter.

“Certainly not with a nuclear bomb like that. But I can tell you there are definitely some reporters who I think would do it to help get ahead. A heads-up like that would obviously groom Ted (in this case) to be an even better source for Trent Crimm (of The Independent).”

Meinke went on to explain that he’s never heard of someone actually doing this. On the flip side, he’s had sources ask him to give up leaks but always declined to do so.

Related: Ted Lasso recap, “The Signal”: What a fish pie can do

As Crimm explains, he revealed his source to Ted because he developed a respect for the manager while spending the day with him for a feature story. The grizzled reporter (portrayed by actor James Lance) was ready to write a takedown of an underqualified coach hired to oversee a then-Premier League soccer club with a devoted hometown following.

But after watching Ted on the job, following him to an event for a local school, and having dinner with him, Crimm saw that the person that most fans and media viewed as a buffoon was a genuinely nice man who considered people’s feelings in nearly everything he did.

“Though I believe that Ted Lasso will fail here and Richmond will suffer the embarrassment of relegation,” Crimm wrote in his story. “I won’t gloat when it happens. Because I can’t help but root for him.”

We haven’t seen much from Crimm in Season 2. The media covering AFC Richmond appears to have accepted Lasso and his unusual coaching methods (as an American football coach hired to coach an English soccer team), largely because of his engaging personality and warm empathy.

But whether it’s because he suspected something wasn’t right or just wanted more to the story, Crimm approached Ted about leaving the Tottenham match when seeing him at the local Crown & Anchor pub. Ted stuck to his food poisoning story, though Crimm seemed wary.

I can feel it in my bones that this scene is gonna come back to haunt us. Trent asking for a statement and Ted lying to him is definitely gonna lead to something.
And I'm already stressed about it. #TedLasso pic.twitter.com/iOTfKLFx8f

Obviously, his suspicions were confirmed when Nate leaked Ted’s panic attack to him. It was a stunning betrayal by the former kit manager promoted to assistant coach by Ted after demonstrating his knowledge of the players and soccer strategy. Throughout Season 2, Nate has become increasingly angry at being overlooked and bullied, which has extended to feeling that Ted gets too much credit for Richmond’s success.

Of course, Crimm doesn’t know that Ted has dealt with panic attacks throughout the two seasons of the series, traced to his fears of abandonment from losing his father. That also applies to leaving his son behind in the United States and getting divorced from his wife. Even when Rebecca originally wanted to undermine Ted, she didn’t resort to divulging something so deeply personal.

(And whether or not a reporter would think Ted’s mental health is news is another question worth raising, as Awful Announcing’s Andrew Bucholtz and Michael Grant did in our Ep. 11 recap. Though Jay Rigdon points out that the standards might be different in the British press.)

The repercussions of Crimm’s report are a big storyline for the Season 2 finale. How will this affect Ted and the public’s perception of him? How will he react to his issues being revealed? What will happen to Nate? And will Crimm actually suffer any blowback, either for the report or for burning a source? Oh, the anticipation… !