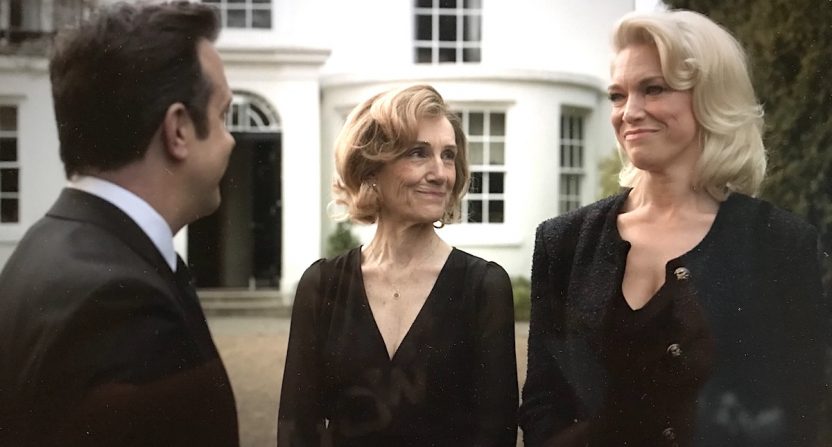 Following Coach Beard on his magical mystery tour through London was a narrative digression that polarized many Ted Lasso fans. But with the emotional punch (punches?) that Ep. 10, “No Weddings and a Funeral,” brought, maybe taking a breath beforehand was necessary.

No standalone story focused on one character this time. The funeral for Rebecca’s father created a setting where the entire cast could gather in one place and plenty of storylines could be addressed. With two episodes remaining in Season 2, is there time to wrap all of this up? Join us in suits, ties, and dress shoes (unless anyone prefers fluffy flip-flops) for our weekly group recap.

Reaction to the Ted talk with Dr. Sharon?

Ian Casselberry: The big moment fulfilled the build to it. Ted’s revelation of his father’s suicide set a high bar for a follow-up, but the script and Jason Sudeikis’s acting hit the mark. Ted isn’t just sad, he’s angry. It’s influenced everything about him. We see Ted needing to push through talking about this and feeling the relief of getting to the other side. I know Sudeikis just won an Emmy, but let’s just give him the trophy for next year too.

However, I do think it was a mistake to intercut Ted’s admission with Rebecca’s. I understand what the writers were going for; these were traumatic, formative moments when authority figures let them down. But it took away from the power of each scene — and the great acting in them — to combine them, and the cuts were borderline annoying.

Michael Grant: What we’ve all been waiting for, a better understanding of why Ted is so overly upbeat and optimistic. The setup makes a lot of sense. A funeral acting as a trigger for a panic attack seems believable and awfully paralyzing.

Dr. Sharon’s character has grown on us. I enjoyed them connecting over their mutual dislike of tea. That building of trust helps her finally break through with Ted and get him to share the horrific details of his father’s suicide. Very glad to see this therapist-patient relationship evolve.

Andrew Bucholtz: I think Ted’s talk with Dr. Sharon lived up to the expectations the series was placing on it, and I actually liked the intercutting with Rebecca’s comments. It was interesting to see the ways their traumatic experiences around their fathers were similar and yet different. That wound up being a nice in-episode build to Ted making it to the funeral and helping Rebecca get through her eulogy.

That particular resolution was better than I expected. I thought the Ted-Dr. Sharon talk would be its own thing, and Ted would later apologize for missing the funeral, and that would have been fine. But it was lovely to see Dr. Sharon help him get to a place where he could not only get through his own trauma, but be there for someone else when she needed support.

Was the Rebecca-Sam storyline resolved to your satisfaction?

MG: Doesn’t seem resolved to me. Feels more like they hit the pause button.

Rebecca and Sam getting back together again in some fashion is inevitable. There’s too much of a hot connection. But there are also a ton of landmines that need to be deactivated. Clearly, Sam wants to be out in the open while Rebecca prefers for it to remain a secret. The public/private nature of their relationship will need to be resolved before they can go forward as a couple.

IC: First, I don’t think it’s over yet. Not in romantic terms, necessarily, but in repercussions. What if more people — coaches, players, staff — find out? Will they leak it to Trent Crimm, The Independent?

While I wish the boss-employee dynamic had been addressed more, I like how Rebecca broke things off. As exciting as their fling was (Nora’s reaction was great), she and Sam are in two very different stages of their lives. Sam is all about the now, Rebecca is thinking about the future and doesn’t want another failed relationship. That felt real, not goopy. How about another Emmy for Hannah Waddingham too?

AB: I agree that this doesn’t seem fully over, either in terms of actual romance or in terms of repercussions. But I thought this was a fine way to handle this for the moment, and I think Ted Lasso has been smart about that in general (also with Keeley and Roy, and a bit with Beard and Jane). Too much TV treats romantic relationships as the answer for everything, but this show recognizes the importance of people needing their space inside those relationships, and sometimes even needing to step away from relationships entirely.

Guesses on what Rupert said to Nate? 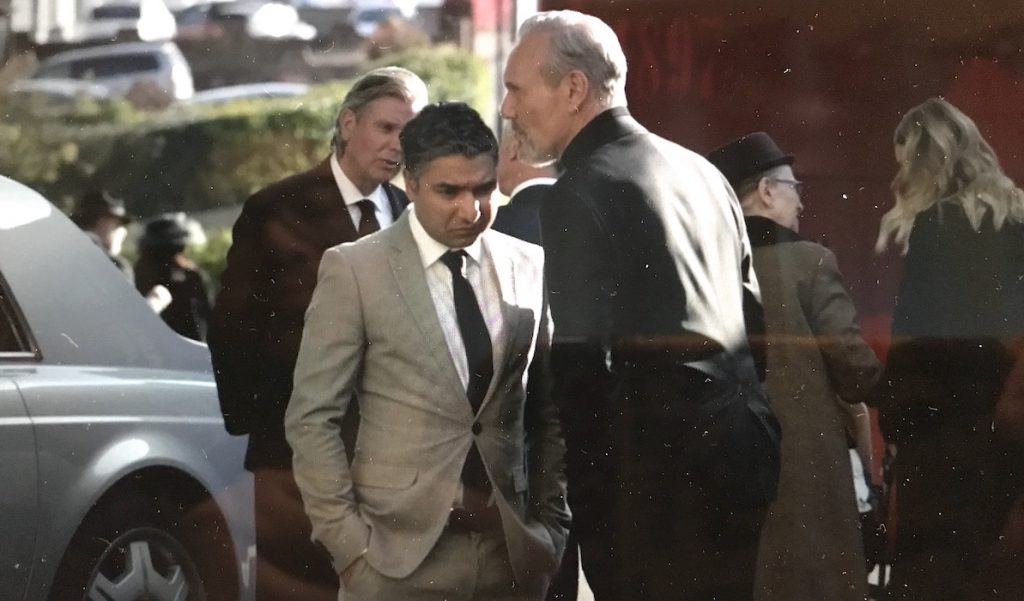 AB: I’m wondering if there’s a correlation to Rupert’s comments about returning his/his wife’s shares of the team to Rebecca. We’ve seen nothing to suggest that Rupert has reformed or gotten better, and it doesn’t feel like he’d do that just for fun. So I wonder if he’s bought or is buying a rival team and if that might lead to him stealing away people like Nate.

MG: A plot is afoot! Rupert is a rabble-rouser, taking a particular delight causing discomfort to Rebecca. I’m guessing he’s setting the stage for something nefarious, and Nate’s just a pawn in his little game. You get the feeling he told Nate that he’d like to set up a meeting with him to get information or tell him something that’s going to cause trouble for Ted and Rebecca.

IC: While Nate has been a bully this season, I’m not willing to think he could be a villain. So I don’t believe Rupert asked Nate to be a spy for him or something like that. But I bet Rupert complimented Nate on his coaching and maybe said he should be the manager instead of Ted. Assuming the team is still in a vulnerable place after the Man City loss, though we don’t know how many matches AFC Richmond has had since then, Nate is arguably in a better place to challenge Ted’s authority.

Dick move by Jamie? Do we have a Keeley-Roy-Jamie love triangle?

MG: “Dick move” is harsh. “Honest” is fair. Sometimes, pure emotion comes out even when the timing is bad. This season has partially been about Jamie’s redemption. He’s a man trying to better himself and this was something he needed to say. The stage was set for a love triangle the moment Jamie returned to the team. Unless Roy messes up royally, Keeley is better staying with him.

IC: “I’m not sure you know how psychologically healthy that actually is.”

Ted said that to Jamie in Season 1, but it applies again here. Though the writers may have tried to give us a scare, I don’t believe there’s a love triangle here. Didn’t we already know Jamie still has feelings for “Kee-leh”? But he really is grateful to her for making him a better person. Maybe that briefly gave Keeley pause, like “Wow, someone truly appreciates me.” But then Roy came over, expressed his own appreciation, and she got the assurance that she’s with the right guy.

AB: This particular storyline didn’t fit as well as the rest of the episode for me. I think Roy’s eventual explanation of his comments made sense, and there was some logic to that coming after Jamie’s remarks here. But man, Jamie’s timing in saying this felt all kinds of off.  Even for Jamie Tartt, there might be better places than a funeral for this kind of love confession.

IC: “Go after the bus driver and make him pay for what he did to me. Avenge me, Keeley. Avenge me!” Roy turning his imagined death into a revenge drama was hilarious, though Keeley didn’t think so.

There’s only one thing about the afterlife that Roy cares about. pic.twitter.com/4AmP29PtaE

MG: “Congratulations, Mother. You just fat-shamed a baby to tears.”

AB: Beard – “You know, if you weigh a person’s body right after death, it’s 21.3 grams lighter. Some say that’s the weight of a soul.”

Roy – “Whoever figured that out clearly weighed someone, murdered them, then weighed them again.”

What song do you want performed at your funeral?

MG: Tough question. There are many possibilities. “Death Stranding,” named after the video game, is wonderfully inspiring. Even among the ruins, you can find hope. Love the lyrics: “What will become of us now, at the end of time? We’ll be fine, you and I.”

IC: If, like Roy, I died from getting hit by a bus, I’d want Queen’s “Another One Bites the Dust” performed at my funeral. Preferably with a bass player playing its signature riff on a loop for people entering the ceremony. But if I died from natural causes or my own stupidity, I’d want people to enjoy themselves. So I’ll say “Shiny Happy People” by R.E.M.

AB: I want any funeral for me to be a celebration of my life and what I did do, rather than anything sad about what I didn’t. And that can always use some irreverence. To that end, let’s go with the Great Big Sea version of “The Night Pat Murphy Died“: