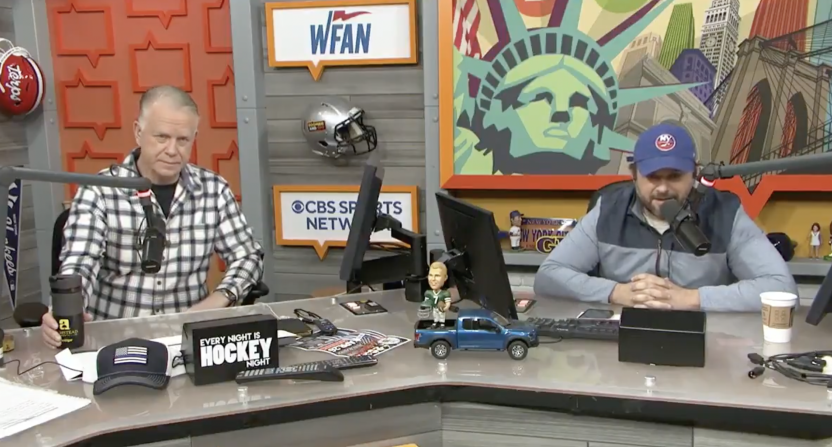 Apple TV+ debuted its Friday Night Baseball presentation last week, much to the chagrin of many baseball fans. And the initial reviews have reflected that as well.

The streaming service opened its new MLB deal with a doubleheader featuring the New York Mets versus the Washington Nationals and the Houston Astros versus the Los Angeles Angels. And we did get a fun moment when Astros rookie shortstop Jeremy Peña homered while his parents were being interviewed in the stands.

Baseball is the best.

Jeremy Peña hits his first career home run during a live interview with his parents during the at-bat. pic.twitter.com/GWE6IfiIRT

However, between outages, minimalist graphics, and chatty broadcasting crews, there were plenty of negative reactions to the presentation and concerns that Apple didn’t seem to understand why people enjoy watching baseball games (though the crisp picture quality did appear to win many over).

Nothing can ruin baseball… and then Apple TV + came along

Two people who were not very impressed with the presentation were WFAN hosts Gregg Giannotti and Boomer Esiason, who lambasted Apple’s broadcast on Monday morning.

“I did not see the Apple TV disaster that everybody was talking about,” said Giannotti on WFAN’s Boomer & Gio. “But I mean, let me tell you something, without even seeing it, it ruined my Friday night because all I was getting was texts about it.

“What it kinda tells me though is this is what Apple TV thinks of baseball. They don’t think the game stands on its own. They were talking about a lot of things that have nothing to do with the game apparently. Just little stories and anecdotes and stuff like that. They’re putting people in there that don’t have any experience whatsoever, so they didn’t treat it like it was a big game Friday night situation at all.”

Boomer, meanwhile, did watch the broadcast and found it to be entirely “unlistenable,” though he did hold out hope that there could be improvements in the future.

"It was, dare I say, unlistenable. I don't know how else to say it?" – Boomer Esiason on Apple TV+'s MLB debut pic.twitter.com/1lbaoLfRCZ

“It was, dare I say, unlistenable,” said Esiason. “I don’t know how else to say it. But then again it’s new and it’s gonna be improved and sometimes when things happen, and they start, you’re like, Oh, my God, they’ve got to fix this. You know. certain things get worse, the Booger Mobile got worse. I don’t know this can get any worse. But, you know, if it can’t get any worse then hopefully there is going to be room for improvement.”

We’ll find out what kind of learnings Apple took away from its debut when Friday Night Baseball returns with another double-header this Friday.