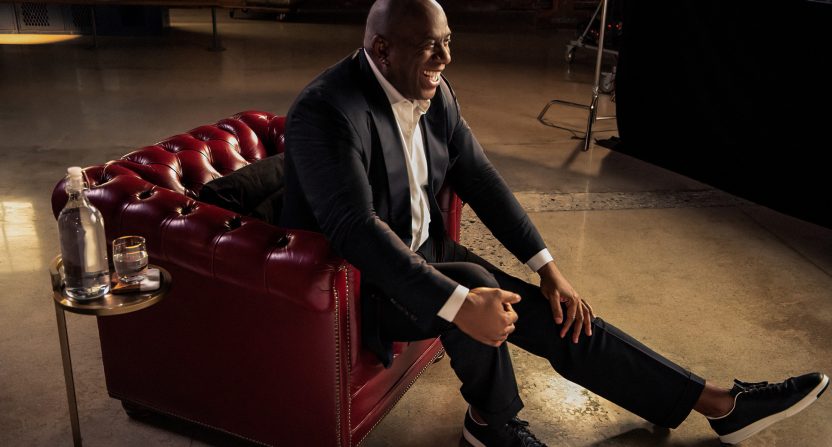 Magic Johnson hates Winning Time. He says that he refuses to watch the HBO dramatic series because the show’s creator Adam McKay never involved him or his teammates.

Winning Time has sparked some backlash. Sportswriters Bob Ryan and Jeff Pearlman recently got into a spat over its portrayal of Jerry West. (The series is based on Pearlman’s 2014 book Showtime.) It’s important to remember that Winning Time is an interpretation of real events and not an official record.

But even documentaries aren’t flawless. You should account for the potential biases of the filmmaker and the subject. While we all enjoyed ESPN’s The Last Dance, it was basically an infomercial for Michael Jordan and Nike. Jordan would not have agreed to do it if he wasn’t shown in the best possible light.

Since the success of The Last Dance, other athletes have wanted the same glowing treatment. Johnson is the latest with the Apple TV Plus docuseries They Call Me Magic which debuts on Friday.

Call it counterprogramming to Winning Time. Certainly, the timing is curious with HBO’s series in the middle of its run. They Call Me Magic is a four-part polished-up look at one of the NBA’s most popular and charismatic stars. Johnson played basketball as if he were a superhero. No-look passes. Sublime ball-handling. Clutch playmaking. He made basketball fans out of people who had previously rarely watched a game. Before LeBron James, before Michael Jordan, Magic transcended the sport.

He played with a joy that appealed to both Black and white America. Johnson along with his counterpart Larry Bird, was responsible for the success that the league enjoys today. Before they took the league by storm, there was a time when the NBA Finals were broadcast on tape delay.

They Call Me Magic looks at Johnson’s humble roots from Lansing, Michigan. The docuseries does some of its best work when it examines how desegregation busing played a role in his upbringing. If Johnson had been allowed to go to his local high school that was within walking distance, perhaps the Magic Johnson story plays out a little differently. This topic doesn’t come up in Winning Time.

They Call Me Magic also does a better job at detailing the coin toss that led to the Los Angeles Lakers having the No.1 overall pick in the 1979 draft which they used to select Johnson. Rod Thorn, then the general manager of the Chicago Bulls, adds invaluable insight on losing the coin toss. No worries. Five years later he drafted Jordan with the third overall pick.

If you have been watching Winning Time, there are plenty of nuggets of information that are also in the docuseries such as Magic’s on-and-off relationship with Cookie, and Kareem Abdul-Jabbar’s hazing of Johnson. Oddly, They Call Me Magic makes no mention of Jack McKinney, his first NBA coach. A twist of fate ended McKinney’s career after 13 games when he suffered a freak bicycle accident. Would have been interesting to hear Johnson’s perspective.

It wouuld’ve been interesting to hear Johnson’s perspective. Instead, he talks about the highs of winning his five championships and his emergence as the biggest sports star in Los Angeles history. As well as recounting his successes as a businessman.

The most fascinating part of They Call Me Magic, occurs when it reveals the clandestine efforts of the Lakers to keep Johnson’s HIV diagnosis a secret in the fall of 1991.

When Johnson announced his retirement, it was an international story. The world was a very different place back then and not much was known about AIDS. What was known: AIDS was scary and deadly. Many people wondered if Magic was going to die.

They Call Me Magic spends a lot of time highlighting Johnson’s efforts to educate the public about the disease. Indeed, he did a lot to change a lot of people’s perceptions about HIV and AIDS. But he also felt frustrated and endured criticisms. When addressing this time in his life, Johnson comes across as stoic and not as forthcoming as you would like.

Another crucial moment is when Johnson talks about his son EJ Johnson, who is gay. Johnson admits to struggling to accept his son’s sexuality. EJ Johnson and his mother Cookie shine here explaining what it was like. Magic Johnson, however, seems guarded and careful with his words. It’s here that a more challenging interviewer might have been able to get more details on Johnson’s honest feelings.

For the most part, They Call Me Magic is a solid refresher on an icon. Director Rick Famuyiwa, best known for the feature film Dope, delivers Magic’s version of his story. It’s interesting but not as engaging as Winning Time.