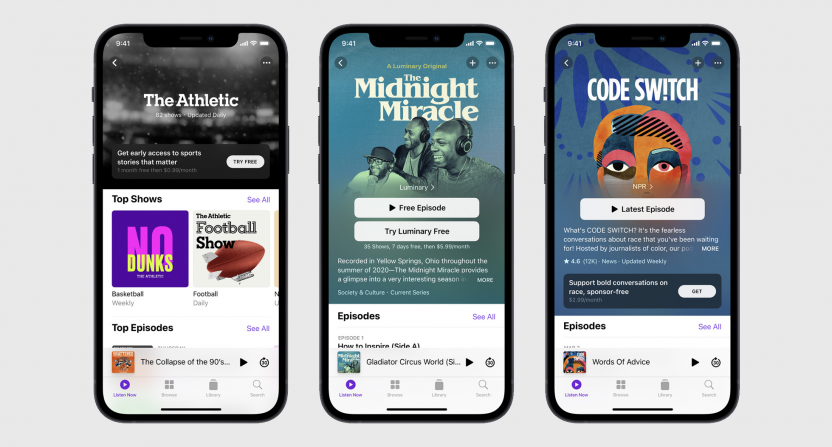 Apple announced a new feature aimed at content creators yesterday that could position the tech giant to take on services like Patreon, while potentially allowing creators an easier way to monetize their work.

Apple Podcast Subscriptions will launch next month with a small group of partners (including The Athletic), before being opened up to the general public. Subscriptions, like the ones suggested by the monthly subscription business ideas, will allow in-app premium offerings on top of the free podcasts that have always been available; offering no-ads or bonus content has long been a way for podcasters to create a premium tier and add paid subscribers on services like Patreon.

It’s not free, of course, and Apple will take a cut of revenue, as broken down by Variety:

Pricing for each podcast subscription is set by creators (billed monthly by default) as are perks included with each plan — which may include no ads, exclusive bonus content, and early or exclusive access to new series.

As is the case under its current App Store policies, Apple will keep 30% of podcast-subscription fees in the first year and 15% in subsequent years. Podcast creators and publishers also can offer annual billing options, as well as free trials and sample episodes.

The Apple Podcasters Program, which includes tools needed to offer premium subscriptions on Apple Podcasts, will cost $19.99 per year.

This is certainly big in the world of sports media, which has countless creators seeking to launch or maintain premium content tiers. It’s not cheap, obviously; Apple taking 30% of revenue for the first year is a big amount, especially given the inherent churn of a subscription model. As The Verge noted, Patreon only takes 12% of revenue.

But what this does offer is a sort of all-in-one offering that could make it easier to convert free listeners to paying subscribers. The Podcasts app is a huge platform, especially in the United States where iOS has over half of the smartphone market share.

If someone is listening to your podcast via Apple Podcasts, having them sign up via the app itself rather than sending them to Patreon or another service altogether where they’d have to sign up, enter payment information, and more is certainly an attractive feature, which is why Apple feels it can get away with that 30% of first-year subscriber revenue.