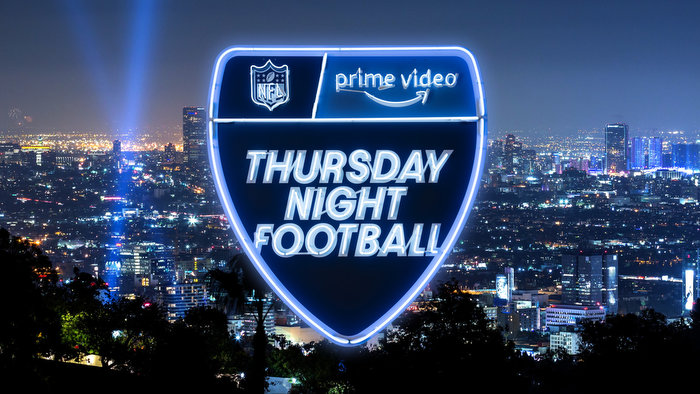 While Thursday Night Football is going to be aired very differently this year, airing streaming only on Prime Video (beyond broadcast airings in the teams’ local markets), one of the ways it will be measured will remain the same. Prime Video parent Amazon has struck a three-year deal with Nielsen that will see TNF audiences measured using Nielsen’s regular TV panel of 42,000 homes and included in the weekly Nielsen TV-watching report. It will be the first streaming service show tracked that way. Joe Flint of The Wall Street Journal broke that news Tuesday:

Amazon.com has struck a deal with Nielsen Holdings to have the ratings firm measure its coverage of “Thursday Night Football” games on its Prime Video streaming platform, the two companies said.

The deal marks the first time Nielsen will include ratings from a streaming service in its closely watched weekly television-viewing report, whose data is crucial for determining the value of commercial time. Amazon’s Prime Video streaming service has exclusive rights to the National Football League’s Thursday matchups starting this coming season, and the company has told advertisers its coverage would get a big audience.

…“This is a huge testament to the role Nielsen plays,” said Deirdre Thomas, the ratings firm’s managing director of U.S. audience-measurement product sales. “It demonstrates the importance of our ratings in the media ecosystem.”

That absolutely is a big deal for Nielsen, getting Amazon on board for this. And it could be a bigger deal still if it convinces other streaming services it’s worth paying Nielsen to have particular content tracked in a way analogous to traditional Nielsen TV metrics. The streaming services obviously have internal data on how many people are watching, but releases based on internal data should be taken with some scrutiny, and they’re usually not directly comparable to TV (or even other streaming services’ numbers) given the different methodologies used.

One particular example of this comes from this year’s Super Bowl, where NBC put out two different streaming numbers: 6.0 million by traditional streaming metrics, 11.2 million average minute audience viewers when co-viewing assumptions were included. Neither of those numbers is necessarily “right” or “wrong”; they’re different estimates generated different ways. But the former is more comparable to the prior year’s streaming number (5.7 million), as that’s how CBS reported their streaming. And both have differences from linear TV numbers.

Thus, Amazon striking a deal with Nielsen will be particularly notable for those tracking TNF ratings, as this should lead to numbers that are more directly comparable with other NFL broadcasts on linear TV. Flint notes that Amazon will also provide advertisers with internal viewing data, so advertisers will be able to get data from that perspective and approach as well. And we’ll see how this plays out; this deal is only for three years, while Amazon’s TNF deal is for 11. If this works for both sides, that would likely lead to a renewal, but if advertisers say they’re fine with Amazon’s internal metrics after seeing how they compare to Nielsen’s, this might not be extended. (It’s notable that even some traditional TV networks have been trying alternatives to Nielsen ratings, with NBC in particular doing that for the Super Bowl and Olympics this year.)

As for what those TNF ratings will be, no one knows quite for sure. Flint’s piece says Amazon told media buyers they’re expecting an average audience of 12.6 million viewers across all games, but likely lower numbers early as viewers figure out this is streaming-only. That would be a notable drop from the 16.4 million across Fox, NFL Network and Prime Video streaming last year, but Flint writes that Amazon still initially tried to charge more for ads than Fox was before eventually lowering prices. So it will be very interesting indeed to see if Amazon’s able to hit that 12.6 million viewer target. And this Nielsen deal will make it much easier for everyone to see how the TNF viewership compares to linear NFL viewership.