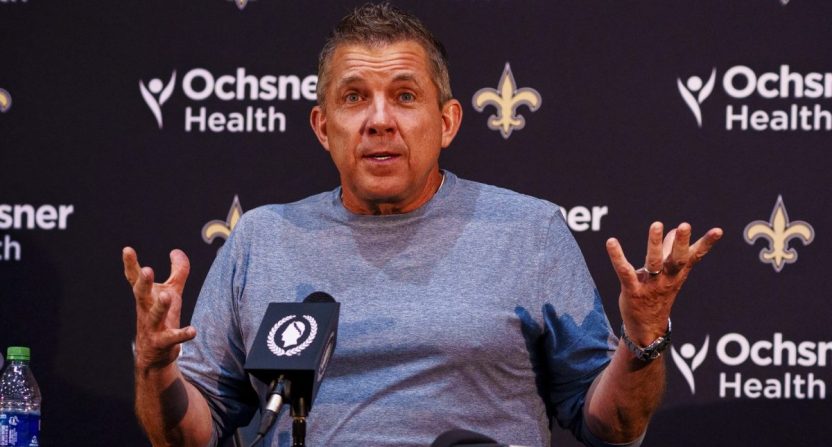 We’ve seen a wave of reports in recent days on candidates Amazon is considering for roles as part of their Thursday Night Football broadcasts.

Over the weekend, news broke that they were even looking outside the pro ranks at ESPN’s Kirk Herbstreit. Today brought another new report, although the name in question is very much a familiar one: Sean Payton.

Payton has been rumored to be in the running to join Fox Sports as well, and with Sean McVay staying in Los Angeles, Payton is the top coach (or former coach) likely available to make a jump to television this offseason. Mike Florio reported the interest today at Pro Football talk, noting that this would be the second meeting between Payton and Amazon, a sign that there could be some fire along with all the smoke:

It’s the second meeting for Amazon and Payton, and it happens as Amazon looks for a Plan B to Troy Aikman, who opted to join ESPN instead.

Payton is being considered by Fox both for studio work and for game broadcasts. He has no specific preference between the two. The jobs, however, are very different.

Broadcasting games currently pays better. Much better, for some. And if Payton were to become the No. 1 analyst at Fox or the lone Amazon color commentator, he’d possibly make as much or more than his coaching salary, which is believed to have been at or above $15 million per year.

Given Florio’s note that Payton is being considered for studio work, it doesn’t necessarily mean that the big weekend Herbstreit news is already obsolete. Payton could very easily spend the year getting broadcasting experience in a fairly low-key format (Thursday night is obviously a primetime game, but TNF streaming on Amazon won’t be the kind of trial by fire that Jason Witten faced on ESPN’s Monday Night Football.)

From there, he could consider moving back into coaching (especially if, say, the Cowboys job opens up), stick around in the Amazon studio, or possibly even explore other options, depending on his contract.

Or hey, maybe he just jumps straight into a booth calling games, loves it, excels at it, and decides that’s a better fit for him. (If he wanted to do that, then, he could possibly have his pick between Amazon and Fox.) Payton is in a position of strength here.

It’s a pretty crazy commentary carousel right now, but at this point, given the multiple roles (and likely many millions) being thrown at Payton across different networks and outlets, it feels like we’ll probably be seeing him on television in some capacity this fall.