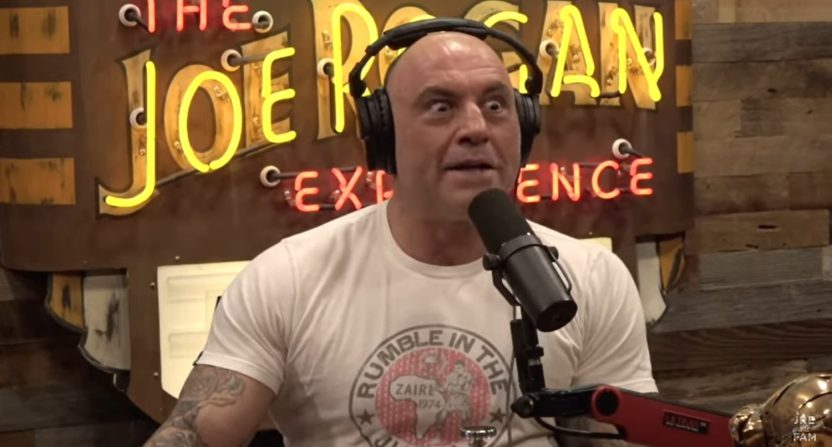 In the wake of promoting an antisemitic film on his social media platforms, Kyrie Irving has been linked to dangerously controversial figures such as Alex Jones and Louis Farrakhan, but the NBA star’s most recent defender is Joe Rogan.

“Kyrie posted a link in his story to a video and this is why he’s getting in trouble,” the polarizing podcast host said on the latest episode of The Joe Rogan Experience with guest Neal Brennan. “But isn’t that video for sale on Amazon? That’s the craziest thing ever. Kyrie is getting in trouble and Amazon’s not? You want all this from him because he watched a video and he sent a link to it that you’re selling. That’s f*cking wild.”

A misconception about Irving’s latest self-inflicted controversy is the assumption that he’s serving a suspension from the Brooklyn Nets over his Oct. 27 social media posts which linked to Hebrews to Negroes: Wake up Black America on Amazon, a film and book known to contain antisemitic tropes. Irving was not suspended indefinitely and handed a list of tasks to complete before returning to the court because he tweeted out an Amazon link, he’s suspended because he failed to properly apologize or even deny that he has any antisemitic beliefs of his own.

“The film is still for sale! They want him (Kyrie Irving) to give up a half-a-million dollars,” Rogan ranted. “They want him to make a public apology, they want him to talk to different leaders and the f*cking video, all he did was post a link…The video is for sale on Amazon! That’s wild that no one has an issue with that.”

But a lot of people have an issue with that. Stephen A. Smith called on Jeff Bezos to remove the film from Amazon and ESPN’s Jay Williams made a similar plea to hold the eCommerce giant accountable. Last week, a group of celebrities and activists sent Bezos a public letter urging him to remove the film and book from Amazon.

While it’s fair to hold Amazon accountable, a celebrity and influencer positioning themselves as a supporter of an offensive film is going to garner more condemnation than the company selling it. There are libraries that continue to hold books with offensive tropes on their shelves, but a person promoting those narratives will always draw more outrage and attention than the institution storing it.

At the time this post was published on Nov. 16, Amazon is still offering Hebrews to Negroes: Wake up Black America on Prime Video.