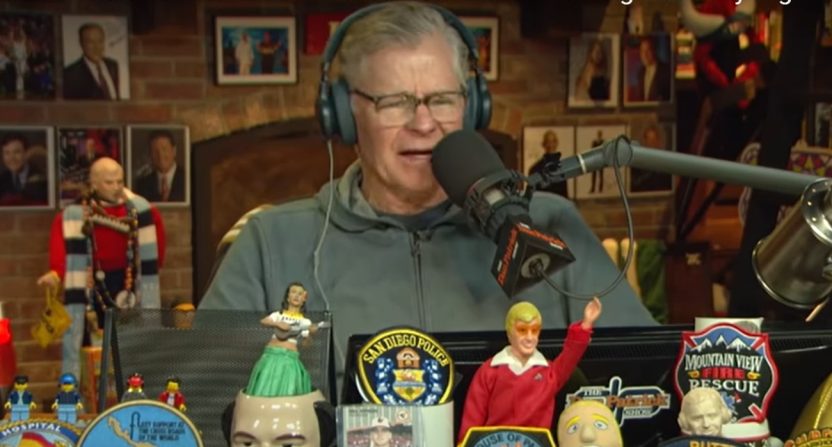 Herbstreit was recently paired with play-by-play voice Al Michaels to create a new broadcast booth for Amazon’s coverage of Thursday Night Football. Since landing the analyst gig, some have questioned Herbstreit’s credentials for the role, citing that fact that he never played in the NFL.

“I don’t buy into this ‘Well, Kirk never played in the NFL.’ Can we stop with that?” Patrick ranted on his radio show. “Al Michaels didn’t either. And there are guys that played in the NFL who can’t broadcast an NFL game. Plus, Herbie is gonna see all of these players when they’re in college. That’s a great resource to have.”

Complaints about Herbstreit might be less about a lack of NFL credibility and more because he’s so closely tied to the college game. It’s hard for the audience to associate Herbstreit with another sport, making him an easy target for criticism after landing the Thursday Night Football job.

Charles Barkley and Ernie Johnson are most recognized for their NBA coverage, and there’s often pushback when college basketball die-hards see them talking about the NCAA Tournament every March. Even rules expert Gene Steratore was originally decried when he landed on CBS and Turner’s March Madness coverage a few years ago, with fans not realizing the former NFL ref spent two decades officiating college basketball games.

Herbstreit has essentially lobbied for an NFL gig in recent years. In 2020, he received positive reviews after calling the first game of the Monday Night Football Kickoff Week doubleheader for ESPN. And after stating he’d be open to a work schedule that included NFL games, Herbstreit called another MNF game last year.

Patrick admitted he was surprised Amazon went after Herbstreit, but not for a lack of credentials. “I didn’t know if he’d be able to do that, if The Mothership (ESPN) would allow him.

“Let’s say you have to prepare,” Patrick said, as he attempted to draft Herbstreit’s schedule. “You go in Wednesday to talk to these teams. You can do that over Zoom, I guess, but you’re going in. You’ve gotta hit the ground running all day Thursday. Friday you’re gonna travel to wherever College GameDay is. You’re gonna get up early Saturday morning. You could be in Oxford, Mississippi. Then you’ve got that night game with Fowler that could be USC/Oregon. Man, that’s pretty intense.”

Despite the grueling schedule, Patrick noted the extra dollars in Herbstreit’s bank account should make it worthwhile. “He also doubled his salary I’m sure,” Patrick said. “That helps…I’m rooting for Herbie, I think he’ll do a great job there.”