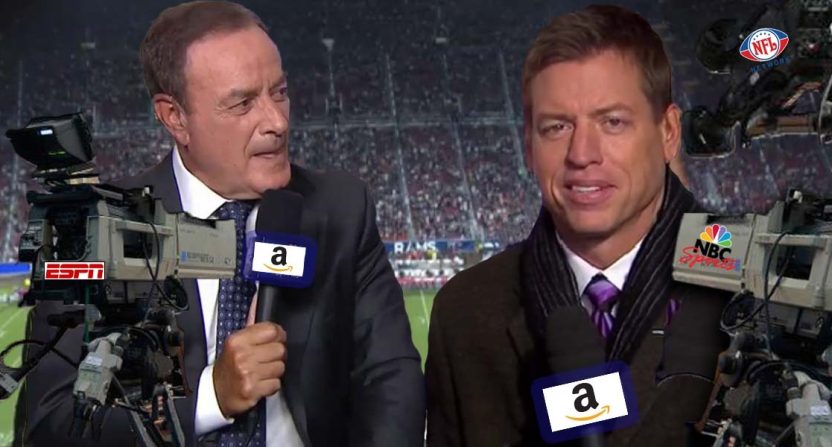 Besides the NFL’s own NFL Network, it’s been nearly 30 years since the NFL has broken in a truly new media partner (not counting various tech companies, who just largely streamed someone else’s production). This is the NFL, and there really isn’t a first impression bigger than this in all of media. We really have no idea what to expect, and we’re less than nine months out.

What we do know is that Amazon is circling hiring Al Michaels and Troy Aikman to be their announcers. This has been rumored for months. At face value, this makes no sense. But the smoke is VERY real here. Both Michaels and Aikman have been asked about it, and while you’d expect some version of  “calling a bad slate games on a streaming service is not really something I want to do”,  that’s not what we’ve received. First, here’s Michaels on HBO’s Back On The Record with Bob Costas, when asked directly about Amazon and his options:

“I do at the moment, yeah. But that’s talking in switchbacks. I’m not sure exactly what combination will or won’t be available, or whether it will be a combination or an exclusive situation. But the opportunity is there to continue on.”

What Michaels is likely hinting at is some possibility of still having some role at NBC, as Sportico’s Anthony Crupi explains here.

Among the options on the table is the Thursday Night Football play-by-play gig, which this fall shifts from Fox to Amazon Prime Video. Amazon has been pursuing a partnership with Michaels since last summer, and as part of a more expansive deal with NBC, the online retailer may rent the Sunday Night Football production crew for its streaming slate of primetime games.

While a talent-share program would free Amazon from the burden of having to develop its own in-house production team from scratch, it would also ask a great deal of Sunday Night Football executive producer Fred Gaudelli and director Drew Esocoff. In the event that both NBC vets agreed to handle SNF and TNF duties, they’d effectively be charged with overseeing 35 games each season.

But how would Amazon land Michaels if his rumored NBC deal didn’t pan out? Another rumor floating around would be that Michaels could somehow return to ABC/ESPN, as the amount of games ESPN has in their new NFL deal is going up from 17 to 23 games, thus necessitating a second NFL-focused announcing booth.  Could Michaels call the TNF package, and then some amount of the ESPN/ABC package as well? This option would open the door for Michaels to call an 11th Super Bowl when it returns to ABC in a few years.

You’d obviously expect a nice sendoff. Some kind words. A montage. This is Al Michaels we’re talking about, after all. 11 Super Bowls, NBA Finals, World Series,  and perhaps the most famous call of all time with “Do you believe in miracles?!”.

But the 77-year-old Michaels is not actually retiring, or leaving for another job, as of now. He may not really be leaving at all. So how do you do a maybe goodbye? It’s weird…..really weird.

Michaels taking the Amazon job makes a bit of sense given NBC is more or less choosing to pass the torch to a very capable Mike Tirico, who has been patient since moving over from ESPN in 2016. It’s Aikman, though, that is more of a stretch.

Aikman has what most might consider the best color analyst job in the NFL. How in the world would he go from the NFL’s best TV package and job to  the worst? Aikman addressed this recently with The Athletic’s Richard Deitsch.

The challenge with Thursday night is it’s not a flex schedule. So what looks to be a good game when the schedule comes out all of a sudden it’s not a competitive game. You still do the work, you still go in and do the best job you can. But when you know that there’s not as much interest by the public, it’s not as much fun. I mean, let’s be honest. The late afternoon window on Sunday, I agree with you, the numbers bear it out. When we show up for kickoff and it’s a big-time game with a lot on the line, that feels good to me. It’s what I’m comfortable doing because it’s what I’ve been doing for 20 years. I feel the broadcasts are different. There’s no doubt that that would certainly factor into any decision that I make.

So how exactly would this work given that, at face value, this seems like a backwards step he’s not interested in. Here’s more on that from my article yesterday looking at the future of Super Bowl announcing teams.

Another option is that Aikman could call the TNF package and then also do studio for Fox (or perhaps even another network) on Sundays, a combination of duties that could pay him more than his current gig. From Front Office Sports last month:

Aikman would again address this in a podcast with Richard Deitsch, where calling two games a week was also mentioned.

“I’ve been doing Thursdays for four years now. It’s a lot of work. It’s challenging. It’s not probably ideal, but when I first did Thursday nights, I thought it was something that I would do for one year and move on. Here were are four years later. We did the entire Fox package for the four years and we were scheduled to do it another year but Amazon, of course, is taking over a year early. So it’s feasible, it’s viable, but it is a lot. It is a lot to get done because of the way that I prepare for a game. There’s not many minutes in a day, when you’re doing two (games) in a given week, that you have free time to do anything.

Aikman would go as for as telling SI’s Jimmy Traina, ” My preference because of how difficult it is would be to get back to a normalized schedule and do one game a week.”

Intrigue builds on what announcers will call upcoming Super Bowls

So essentially Aikman would maybe go to Amazon if he could do two jobs, but he really doesn’t want to do two jobs. Hmmmmm. Seems tricky!

Another relevant Amazon rumor out there is that the logistics giant may end up buying half of NFL Media, which includes NFL Network, NFL.com, and NFL Red Zone. Could NFL Media be a backup solution to production if a deal with NBC couldn’t be reached? Would Aikman or Michaels have any interest in doing any type of work beyond TNF for NFL Network? (Probably not, I’d guess).

In all likelihood, Amazon knows that there is going to be an influx in the millions of new users to Amazon Prime Video who are solely using the service to watch TNF. Amazon would like those users to stick around and see that the service is competitive to Netflix. The easiest way to do that is to have relevant football content to get those new users to stick around within the app, which is what NFL Media would give them.

Additionally, that kind of NFL Media acquisition would put them in very strong position to win the NFL Sunday Ticket bidding, one of the only rights deals that isn’t locked up for the rest of the decade. Maybe Aikman and Michaels could be sold that something on the NFL Media front would be interesting to them. Although, that seems like a big stretch.

If the dream announcing team of Michaels and Aikman is going to happen as many seem to think (the Michaels part being more likely), it’s really on Amazon to cut the deals needed to make the job attractive enough for both. That’s what’s really coming through in all of their interviews. They’re waiting for Amazon to elevate the job via a partnership so that’s it not JUST lowly TNF, which is now not on television.

In both scenarios, Michaels is in the running to call playoff games, with NBC having two on some weekends. Should a NBC partnership be struck, he could likely spell Tirico on a few SNF broadcasts, particularly those on the west coast where he lives. Or he could even perhaps even drop in to do a few high-profile Notre Dame games.

With ESPN, Michaels would be getting another 6-7 games a year, with the door open for him to call a Super Bowl. I think the latter scenario is less likely as ESPN may want a more long-term solution here. That might mean there is added pressure for Amazon to finalize the NBC deal to ensure landing Michaels.

As for Aikman, it’s not quite clear if a NBC partnership would do much for him. He has an existing relationship and comfort level with Fox and hence his willingness to discuss maybe doing some studio work for Fox. Would studio work on Sundays for NBC in the Northeast vs. LA also be attractive to him? Could he potentially be interested in replacing Collinsworth on Sunday Night Football? That’s interesting but adds another moving part to the NBC side.

Would Aikman have any interest in joining Michaels to do some games for ESPN, should Michaels go that route? It would certainly make ESPN’s Super Bowl broadcaster decision a lot easier if so. Or is Aikman doing studio work for on Sunday mornings for Fox the most obvious answer to make this happen? If I’m Fox, I’m not exactly sure that losing Aikman calling games to doing studio work is that much of a soft landing for them. While you want to keep talent happy, you’d be essentially enabling him calling games at another network and creating a huge headache in replacing him on your side.

Whatever shakes out, there is a strong belief that in five years, Amazon is going to be a much bigger player in the sports media world. Some believe that in the next decade they could acquire a RSN network, NBC, or perhaps even ESPN. They certainly have the money to do so. But even so, next season’s TNF debut remains a considerably high hurdle for a company with minimal experience in sports. How they navigate the next nine months is one of sports media’s biggest question marks, as is who we’ll see when the curtain comes up next fall.  Perhaps, though, we’ll get a little bit of a clue on Sunday night when NBC handles the possible departure of one of sports media’s most accomplished stars.