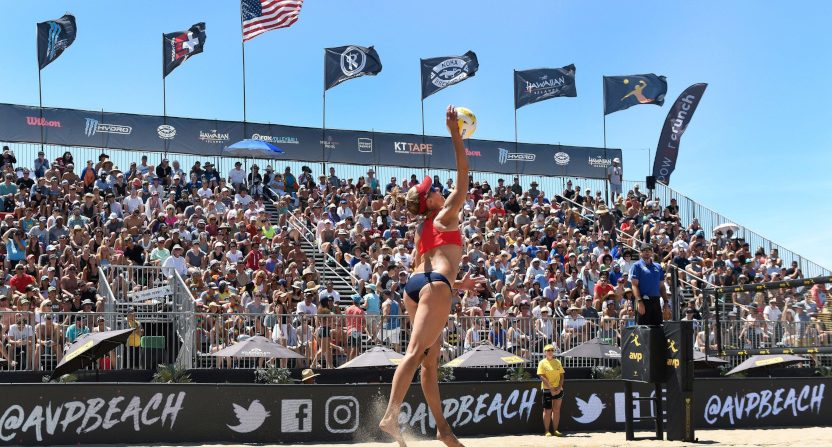 Another league announced its return plans Wednesday, the Association of Volleyball Professionals (AVP) beach volleyball tour. And those plans, which will see the suspended regular season replaced with a three-week “AVP Champions Cup” tournament in Long Beach, California, come with an interesting broadcasting arrangement across Amazon Prime and NBC’s networks. Chris Smith of Sports Business Journal broke the news of the AVP’s return plans Wednesday, and Jimmy Golen of The Associated Press has more, including an interview with top player April Ross (seen above serving during last August’s Manhattan Beach Open, she won Olympic silver in London in 2012 and bronze in Rio in 2016):

The top U.S. tour, the AVP, announced Wednesday that it was replacing the suspended regular season with a three-week event in Long Beach, California. The AVP Champions Cup Series will take place on successive weekends from July 18 to Aug. 2 with a total prize pool of $700,000.

No fans will be in attendance, but all matches will be streamed on Amazon Prime, and some will be broadcast by NBC.

“With the restrictions and regulations in place, we were forced to suspend all fan-attended events and refocus on creating the best possible scenario to bring fans the sport they love so much and provide a meaningful way for our athletes to compete,” tour owner Donald Sun said. “The AVP Champions Cup Series allows us to keep our footprint small, regulate safety protocols and still provide top-flight beach volleyball competition for fans to watch.”

…“This was the year, it was supposed to be so big with the Olympics and the whole AVP season,” Ross said. “Now that we don’t have the Olympics and our international season has been canceled, I think it’s so amazing the AVP has figured out a way to get us on NBC and Amazon Prime and hold these events.”

This is going to be a long way from a normal AVP event. Beyond the lack of fans, this won’t even be on the actual beach; the courts will be set up on sand imported to a parking lot, which will let them stay in place for three weeks. And staff and players will be tested for the COVID-19 virus, and masked when they’re not playing. So it’s going to be quite different than what many are used to.

But it’s notable that beach volleyball has found a way to resume, and it’s also notable that the tournament’s going to be primarily on Amazon Prime. Amazon has had an AVP partnership over the past few years that’s included coverage of every match, but it’s still interesting to see them as the lead broadcaster for a big event like this. And while Amazon has invested in some live sports streaming before, that’s generally been with things that were already broadcast on linear TV (from Thursday Night Football to New York Yankees’ games). They have done some AVP coverage that wasn’t already on TV, but it’s interesting to see them taking a lead role in a prominent season-replacement tournament like this.

It certainly makes sense for the AVP to still have some linear television presence with NBC’s networks (a frequent previous partner), and that will help boost the reach of this event. But it’s definitely notable that they managed to pull down a full-event commitment from Amazon for a big event like this. And if this particular unusual event does well, that could lead to Amazon getting even more involved with the AVP Tour down the road.