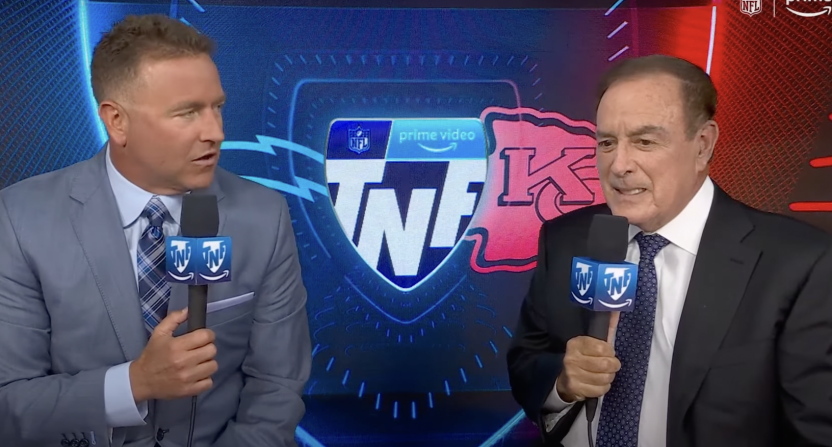 It was an interesting year for Al Michaels. The longtime voice of Monday Night Football and then Sunday Night Football became the inaugural voice of Prime Video’s Thursday Night Football this past NFL season. While Amazon was thrilled to get the chance to become an NFL broadcasting partner, it’s safe to say that the slate of games they got this season was not exactly must-see TV. Michaels caught the brunt of that, being forced to call some of the biggest stinkers and yawners of the year.

The 78-year-old certainly wasn’t shy about sharing his disdain with a lot of the football he had to witness. This was never clearer than the October 6 showdown (to put it kindly) between the Indianapolis Colts and Denver Broncos. This snoozer of a game, won 12-9 by the Colts in a field goal-fest, had Michaels referring to it as “farcical” and pondering aloud if it was so bad it’s somehow good.

Al Michaels: "Sometimes a game can be… so bad, it's almost good. You know what I'm saying?"

Kirk Herbstreit: "No! I'm not feeling that just yet over here!"

This was followed by a Colts pass for -5 yards, and then another Matt Ryan interception. ?? #TNF pic.twitter.com/PBROC4yF3G

Michaels appeared on Richard Dietsch’s Sports Media Podcast earlier in the week and was fairly candid about what it was like to call a schedule full of so many lackluster NFL games.

“I think I’m to the point in my life and career, having watched sports since I was 6 years old, I feel what the crowd feels,” said Michaels. “The Denver-Indianapolis game (in) Week 4 was a dreadful game. No other way to describe it. No touchdowns. In fact, at one point during the game, I said to Kirk (Herbstreit), “Is it possible this game could be so bad that it’s actually good?” He’d never heard that from a partner and went, “No!”

Al added that he didn’t personally think he was being more critical this season than he had been in years past, noting that it’s not like he didn’t have to call some stinkers on MNF and SNF too.

“A lot of people said, ‘Al’s bored, Al’s pissed off that he’s doing this.’ Not the case. Monday nights, Sunday night, I did things like this. Maybe not to that degree, but I try to echo the feelings of what the fan feels because I’m a fan,” said Michaels.

While that might be true, the suits at Amazon probably weren’t too thrilled to hear their lead announcer call out their prize NFL games for the snoozefest that they were. However, Michaels says that he received only positive feedback and support from the company. He also then used a very funny metaphor to describe what it’s like trying to get people excited over terrible football.

“From the Amazon people, nothing but support,” said Michaels. “I think they understood what this was. We’re making the most of it. I mean, you just can’t oversell something. Do you want me to sell you a 20-year-old Mazda? That’s what you’re asking me to do. I can’t sell you a used car. … I’ve kind of gone down that road a little bit in games that have been bad in the past. But this game was horrifically bad. What were you supposed to do at that point? And away I went.”