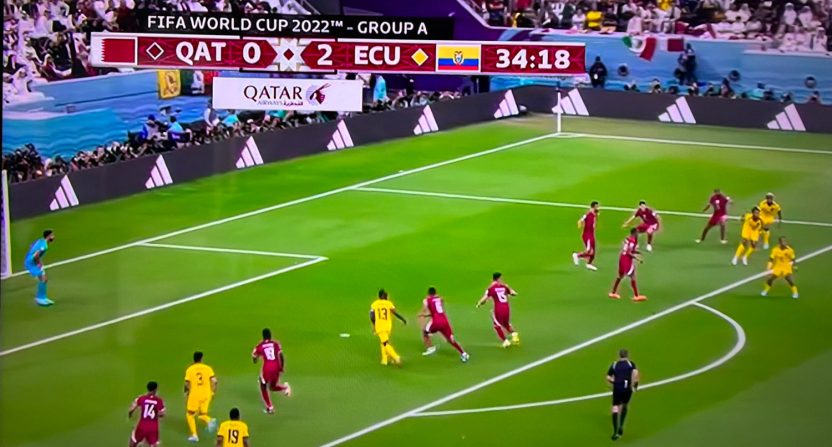 U.S. English-language 2022 FIFA World Cup broadcaster Fox’s decision to only cover off-field issues in Qatar when they “affect the field of play“ has been known for a while, but Ben Strauss of The Washington Post had some interesting reporting Friday on a new angle of how Fox is covering this tournament. Fox has all of their match announcing teams on site this time around. That’s a sharp change from the 2018 World Cup in Russia, where four of the six announcing teams called matches from the company’s U.S. studios.

And as per Strauss (but part of this is disputed by Fox, which we’ll get to),the broadcaster’s initial plans for Qatar also involved a limited on-site presence. Strauss writes that that only changed when state-owned airline Qatar Airways struck a deal to sponsor Fox World Cup coverage (they’d previously sponsored Fox’s Gold Cup coverage last year, but this World Cup deal was new). Here’s more from his piece:

According to three people familiar with Fox’s plans, the network was initially planning to use mostly remote production and send a minimal contingent of staffers and talent to Qatar. The strategy only shifted after the deal with Qatar Airways was finalized; that agreement included comped flights to Qatar, said those people, speaking on the condition of anonymity to reveal private discussions.

…The Qataris are hoping to use the World Cup to showcase their country to a wider global audience. An important piece of that is to have the American broadcaster in the country, said two of the people who were told about the deal. They described Fox executives as celebrating the deal because the network can deliver a more robust broadcast to viewers but won’t have to pay for it.

Strauss also includes pushback from Fox, though, and specific pushback on the comped flights claim:

In a statement, Fox said: “Qatar Airways is a major sponsor of FIFA World Cup 2022 and will have significant presence across our entire coverage of the tournament. They, along with our portfolio of blue-chip sponsors, allow us the opportunity to present unrivaled coverage of what arguably stands to be one of the best World Cups ever with the long-awaited return of the U.S. Men’s National Team.”

Asked whether the Qatar Airways sponsorship had any impact on its coverage, a Fox spokesman said: “Absolutely not.”

After this story was published, a Fox spokeswoman sent an additional statement to The Washington Post, denying the network’s deal with Qatar Airways included comped flights.

There’s obviously a debate there over “comped flights” in particular, but that doesn’t mean Strauss’ sources are necessarily wrong on the effect. Qatar Airways is obviously paying Fox some amount of money for this sponsorship, and it’s possible for that to have the effect of Fox sending more people to the tournament. Whether that’s  “Qatar Airways pays Fox X dollars plus Y dollars in in-kind services” (flights) or “Qatar Airways pays Fox X+Y dollars for sponsorship, Fox then pays Qatar Airways Y dollars for flights” doesn’t really change the effect, although the latter would allow Fox to deny “comped flights.”

Of course, there’s also the chance that the “three people familiar with Fox’s plans” got something wrong and there wasn’t an actual link from that sponsorship to the decisions about how many people would be on site. But having people on site is expensive, and it is clear that Fox did receive a significant sponsorship from Qatar Airways, which certainly would have helped with those costs. (Interestingly enough, U.S. Spanish-language broadcaster Telemundo also has all commentators on site for this tournament., but does not have a Qatar Airways sponsorship.) And Qatar Airways’ sponsorship even extended to having their logo on screen under the scorebug during the first match Sunday:

Fox’s coverage in the States is presented by the state-owned Qatar Airways https://t.co/VnlL7eGPVg pic.twitter.com/HYPloQgvUQ

At any rate, it’s certainly interesting to hear a report that Fox was initially planning to only have a limited on-site presence in Qatar. They definitely wound up with a large on-site presence there, whether there’s a causal link to the Qatar Airways sponsorship or not. And while that sponsorship may or may not have had any impact on their decision to keep their coverage “entirely on the 64-game tournament” (and not the many, many surrounding issues), that decision is certainly one that works in favor of Qatar Airways and the Qatari government that owns it.