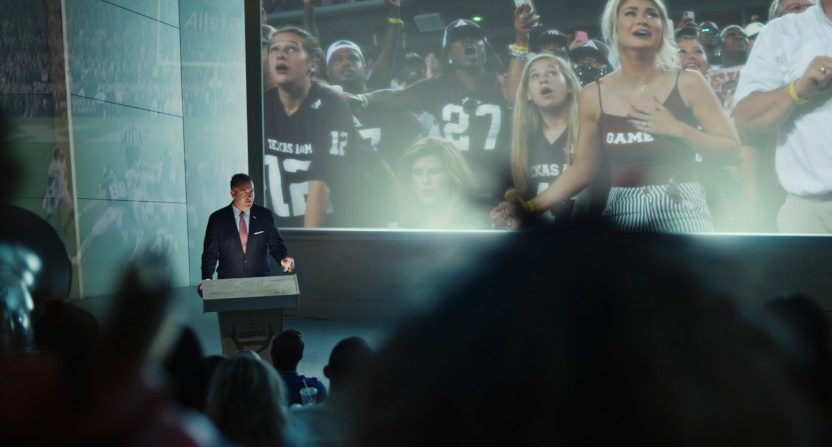 While live sports broadcasts are themselves a crucial venue for advertising (which is the rationale behind the giant rights deals), it’s also interesting to see what campaigns are used to promote those sports broadcasts themselves elsewhere. ESPN has done a lot of notable things on this front over the years, from the famed This Is SportsCenter ads through Life Needs Sports and more. On College GameDay Saturday, they rolled out a new “The Greatest Story Ever Played” campaign advertising the 2022 college football season across Disney and ESPN networks.

Part of that campaign is a video featuring ESPN analyst Kirk Herbstreit giving a lecture on the stories of college football. His audience for that is a classroom filled with fans, coaches, mascots and band members, and he does that while specific highlights play behind him. Here’s that video:

Here’s a transcription of what Herbstreit says:

“What makes for a great story? Is it drama? Action? Or is it love? Not just love love, but the kind of love that makes you do crazy things?” (An Arkansas fan in the audience yells ‘Woo pig!” and Herbstreit responds “Exactly.”) “A great story has to have heroes we can root for. It has magic, it has power, and every once in a while, it has miracles. A great story needs an opening that sucks you in, a middle that won’t let go, and a mind-blowing, nail-biting ending that has you hanging on every snap. That’s what makes for a great story, and as luck would have it, that’s our story.”

The video includes people representing more than 30 schools across the FBS and FCS levels. It features cameos from Notre Dame head coach Marcus Freeman, school mascots Big Al (Alabama), Lucille (Cincinnati), Rameses (North Carolina) and Sebastian the Ibis (Miami), cheerleaders from Michigan and Utah, the Tennessee State Tiger Gems dance team and a TSU Aristocrat of Bands drum major, and a sousaphone player from Ohio State. Here’s more from an ESPN release on their thinking with this:

ESPN recently announced its latest creative campaign, ‘The Greatest Story Ever Played,’ promoting the 2022 college football season on ESPN. A collaboration with Arts & Letters, the campaign highlights the sentiment surrounding great college football stories – on and off the field – and the variety of ways the sport captures the attention of fans.

…“There are a million great college football stories with a million great ways to tell them, and that’s what we aim to capture with ‘The Greatest Story Ever Played’ platform,” said Emeka Ofodile, ESPN Vice
President, Sports Marketing. “It’s a campaign built to celebrate the return of football and the numerous stories that will unfold from Week 0 until the confetti falls in January.”

…“The whole idea behind ‘The Greatest Story Ever Played’ stems from the thought that college football, maybe more than any other sport, is full of incredible stories on and off the field,” said Andrew Kong,
Creative Director at Arts & Letters. “We wanted to stay authentic to the sport with real fans, real mascots, real relics — even a real sousaphonist. The conceit for the launch anthem is that all of college football has gathered in this college lecture hall, led by Kirk Herbstreit.”

There’s some logic to this, with the video showing off both memorable past college football moments and current CFB figures. And the idea of a college football lecture delivered by Herbstreit to an audience of CFB figures is a fun one. The focus on the stories involved in college football, and ESPN’s telling of those stories, is notable as well. We’ll see how this gets used this year.